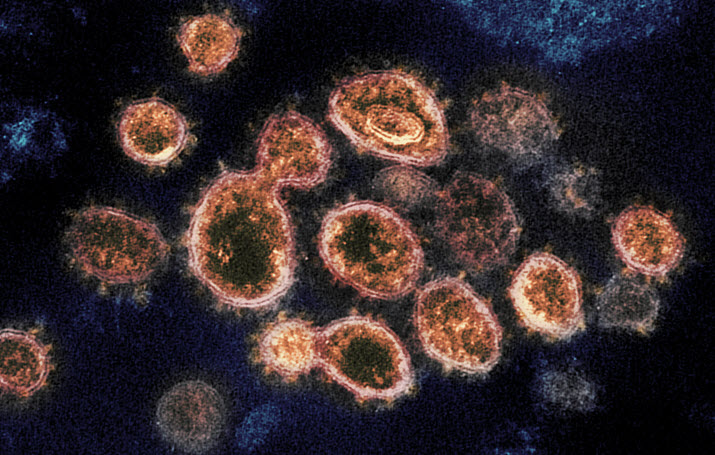 The virus that causes COVID-19, called SARS-CoV-2, shown here in an electron microscope image, can trigger severe cases of infection in some younger patients. Studying them could help scientists pinpoint genetic mutations that make people more susceptible to the disease.

Newswise — Hundreds of clinicians worldwide are banding together in an effort to study some types of severe cases of the new coronavirus disease.

Casanova aims to enroll 500 patients internationally who meet three broad criteria: they’re less than 50 years old, have been diagnosed with COVID-19 and admitted to an intensive care unit, and have no serious underlying illnesses, such as diabetes, heart disease, or lung disease.

By studying these patients' DNA, scientists may pinpoint genetic mutations that make some people more susceptible to infection. Such information could one day help doctors identify people who are most at risk of developing severe coronavirus disease, says Casanova, a pediatrician at Rockefeller. It could also offer clues for scientists searching for new therapeutics. For example, if patients’ cells aren’t making enough of a particular molecule, doctors may be able to offer a supplement as treatment.

That day may still be years away. “This is not a short-term effort,” Casanova says. Some scientists have hypothesized that COVID-19 might be a seasonal illness, with infections ebbing in the spring and summer, and then returning in the fall. But Casanova’s team is optimistic. They have already begun enrolling patients and have started sequencing their “exomes” – spelling out all of the DNA letters in every gene in a person’s genome. “We’re going to try to find the genetic basis of severe coronavirus infection in young people.”

Late last year, when the first coronavirus infections began cropping up in China, Casanova started reaching out to his colleagues there. Though the most severe cases seemed to concentrate among older adults and those with other conditions, Casanova was interested in the outliers – kids and young adults hit hard by the illness who didn’t have any of the usual risk factors, such as age or underlying illness.

His team kicked off a new project to study these mysterious cases, and in January – just weeks after the Wuhan outbreak – began enrolling patients. Clinicians mailed patient blood and DNA to his lab, and researchers there and elsewhere began processing samples – the first steps needed for scientists to peer into patients’ genomes. Now, the project is global, and Casanova is collaborating with scientists and healthcare workers from Europe to Africa, Asia, and Oceania.

Hunting for the genetic underpinnings of severe infectious diseases is nothing new for Casanova’s team. “What we’re doing with coronavirus is what my lab has been doing for 25 years with other infections,” he says.

They look for weak spots in people’s immune systems – small genetic changes that make people more vulnerable to disease. His group has previously searched the genomes of patients infected with viruses, bacteria, fungi, and even parasites. The infection closest to COVID-19 his team has studied is severe influenza pneumonitis, for which they’ve discovered three genetic links. They’ve also identified specific genetic errors that can predispose patients with herpes to viral encephalitis. And they’ve found that children with mutations in an immunity gene called IFN-gamma are vulnerable to the bacteria that cause tuberculosis. These children make low levels of the IFN-gamma protein, which is critical for fighting off bacterial infections.

Casanova’s team has put these findings to use clinically. For example, the researchers have shown that tuberculosis patients with these genetic errors can benefit from treatment with IFN-gamma. He’s hoping to identify problematic genes in patients with severe coronavirus infection that can bring similar clinical gains. These genes could tell scientists which cellular defenses are crucial for warding off COVID-19 – and pave the way for understanding whether such defenses are derailed in older adults or patients with an underlying medical condition.

In the US and around the world, severe coronavirus disease seems to hit older patients hardest, though scientists have reported some country-to-country variation. As of March 24, more than 44,000 confirmed and presumptive positive cases have been reported in the US. Fatality has been highest in people over 85 years old, according to a recent report from the Centers for Disease Control and Prevention (CDC). Though young people may be more susceptible than scientists once suspected, “the older you are, the higher the likelihood you have a severe form of the disease,” Casanova says.

Last week, Rockefeller closed all labs except those working on the coronavirus, and Casanova whittled his team to a skeleton crew of about eight people – down from 35 – who rotate so there is only one person per room at a time. He and his lab members are following CDC recommendations, and taking protective measures to keep themselves and others safe, including social distancing, washing hands, and disinfecting surfaces. They’ve also taken to Twitter to get the word out about their work. A tweet posted from Casanova’s lab last week about recruiting new patients to their study has since been retweeted more than 400 times.

Soon, they’ll be testing their genetic theory on a pandemic that’s occurring in real time. “I’m grateful we’ve been able to start this new project so quickly,” he says. “God willing, it will be of clinical use in two or three years.”

HHMI scientists are joining many of their colleagues worldwide in working to combat the new coronavirus. They’re developing diagnostic testing, understanding the virus’s basic biology, modeling the epidemiology, and developing potential therapies or vaccines. Over the next several weeks, we will be sharing stories of some of this work.