Discovery paves the way to quantitatively investigate the interplay among magnetism, superconductivity and disorder in high temperature superconductors. 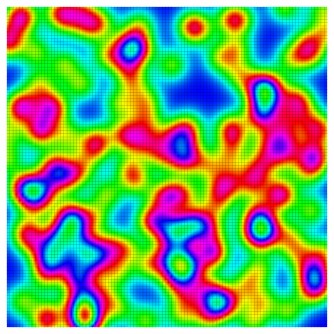 Numerical simulation of the magnetic inhomogeneity (red = magnetism, blue = superconductivity) caused by replacing 1% of the indium atoms in a superconductor (CeCoIn5) with cadmium atoms. The field of view is approximately 100 nanometers along each edge. (Cover Image from Seo et al., Nature Physics, 10, February 2014).

High purity single crystals of superconducting material (CeCoIn5) with the highest observed superconducting temperature for a cerium-based material enabled investigation of the relationship among magnetism, superconductivity, and disorder by strategic substitution of certain atoms with others (dopants) in the superconductor.

Just as the Rosetta Stone has the same message written in three different scripts giving scholars key insights into ancient languages, the subject material (CeCoIn5), by virtue of its high purity, allows study of the interplay between magnetism, superconductivity, and disorder in three different classes of unconventional superconductors (cuprates, pnictides, and heavy fermions). The versatile model system could help researchers decipher the complex emergent phenomena in different classes of unconventional superconductors and in the development of a complete theory for the high-temperature superconductivity.