A Search for New Superheavy Isotopes

Following in the footsteps of supernovas, a new approach offers a more natural way to make new extremely heavy elements. 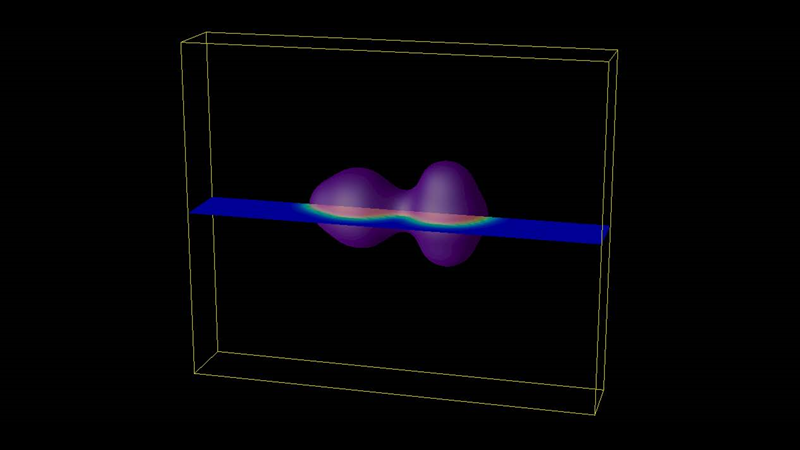 The mechanism of multinucleon transfer using theoretical calculations. Scientists created heavy nuclei by allowing nature to select the neutron richness of the heavy nucleus. The picture shows uranium and thorium nuclei in contact with each other.

If you chart the stability of atomic cores (nuclei), the trend is that adding more protons and neutrons makes the atom less stable. However, there’s an island of stability that bucks this trend. If scientists can provide an easier way of producing elements predicted to be on that island of stability, they can fine-tune today’s nuclear models. Such elements were difficult to produce, until a team built an apparatus that efficiently produces superheavy elements by transferring multiple nucleons (either protons or neutrons).

The team has embarked on a search for superheavy elements using a mechanism that may enhance the yields of heavy neutron-rich nuclei. In this way, the team allows nature to select the neutron richness of the elements produced. The heavy nuclei used are easy to obtain and long-lived, relative to the more widely used method for producing superheavy elements.

The widely used method for producing superheavy elements requires extremely time-consuming searches that are, in turn, very expensive. Further, stable heavy elements may be difficult to produce in laboratories. Now, researchers have built an apparatus to allow a search for superheavy elements in an extremely efficient manner. The device is called the active catcher array. It’s placed a small distance downstream of the target to collect any heavy elements that may be produced in 7.5 MeV/u uranium + thorium reactions. The catcher is itself a detector that can detect alpha particles from the decay of the implanted heavy elements. The team employed waveform digitizers along with a variety of clocks to determine the time when the alpha particles are emitted as well as their energies. Using this information, the team determined energies and half-lives for elements caught in the active catcher.

The team used the correlated energy half-life results from their search to determine the atomic number of the nuclei from which these alpha particles were emitted. The results indicate that the heaviest elements observed have the longest half-lives and that the atomic numbers of elements observed with shorter half-lives do not extend to such heavy elements. To ascertain the range of the atomic numbers of these nuclei, the team compared the data to theoretical predictions that were done for several isotopes of heavy elements having atomic numbers that range from some of the heaviest discovered to date to some far in excess of those discovered to date. Comparisons of the energies and half-lives of these alpha emitters with known and predicted half-lives suggest that new activities with an atomic number at least as high as 116 are being produced in these multinucleon transfer reactions. This result shows that the mechanism of multinucleon transfer is a means to produce and study super heavy elements.

The Department of Energy, Office of Science, Office of Nuclear Physics; Robert A. Welch Foundation; and the National Science Center in Poland funded this work.