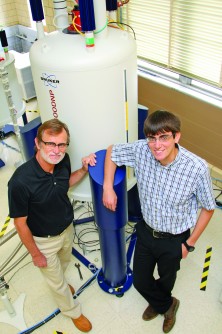 Newswise — In just a little over a year of operation, the U.S. Department of Energy Ames Laboratory’s dynamic nuclear polarization (DNP) solid-state nuclear magnetic resonance (NMR) spectrometer has successfully characterized materials at the atomic scale level with more speed and precision than ever possible before. Spectra for materials important to catalysis, solar energy, and hydrogen storage have helped scientists better understand how these materials work.

Conventional NMR detects the responses of atomic nuclei to direct excitation by radio frequency waves. DNP-NMR offers faster and more detailed spectra over traditional NMR by first exciting unpaired electrons at their microwave resonance frequency and then transferring the resulting spin polarization to the material’s nuclei. This additional step results in much stronger signal intensities from these “hyper-polarized” nuclei than is available by conventional means.

The advanced capabilities of DNP-NMR have already made it possible for Ames Laboratory NMR experts to answer questions that were out of reach before. For example, in a paper in the Journal of the American Chemical Society, Ames Laboratory scientist Marek Pruski and his research team reported on DNP studies of natural abundance oxygen (17O) in several materials. Oxygen is practically undetectable by conventional NMR due to its low natural abundance and quadrupolar nature. “The signal enhancement that DNP provides, allows for detection of 17O without enrichment,” said Pruski. “The detection of 17O nuclei was among our key targets early on, because oxygen is one of the most ubiquitous elements in materials.”

Pruski and his team, which also includes Ames Laboratory scientist Takeshi Kobayashi, use DNP-enhanced spectra of other nuclei, such as 15N, 29Si, 27Al, 195Pt, and 207Pb, to make key characterizations of a variety of other materials prepared at Ames Laboratory. They collaborate with Aaron Sadow’s and Igor Slowing’s research groups on the design and testing of new types of supported catalysts, as well as new polarizing agents that may offer even more improvement in DNP measurements. They also work together with Vitalij Pecharsky and co-workers on understanding the solid-state transformations in complex metal hydrides. The ‘DNP contingent’ has been further strengthened by Aaron Rossini, who recently joined the Ames Laboratory as a faculty scientist. Rossini’s interests include DNP characterizations of novel materials as well as DNP method development.

“Hardly a week passes where we don’t get a contact from other researchers about DNP, and the instrument is operated non-stop,” said Pruski. “Our external collaborations include Iowa State University, Argonne National Laboratory, Northwestern University, Washington University, University of Delaware, University of Lille (Lille, France), University of Wisconsin and Purdue University, and the list continues to grow.” One important next step is enhancing the capabilities of DNP by designing new pulse sequences, instrumentation, highly efficient polarizing agents and improved sample formulations, in order to open new doors to even faster, detailed measurements of materials’ properties. Pruski’s team is engaged in this effort.

“DNP was invented by physicists and then first widely used by researchers to characterize biological systems, but I think many would agree that the primary beneficiaries of DNP are materials scientists and chemists,” he said. “The technique is particularly well suited for studying the surfaces of materials. But, it’s still early and much work is needed to improve the technique.”

The paper can be found at the following web address: http://www.pubs.acs.org/doi/pdf/10.1021/jacs.5b03905.This work was supported at Ames Laboratory by the Department of Energy’s Office of Science (Office of Basic Energy Sciences).