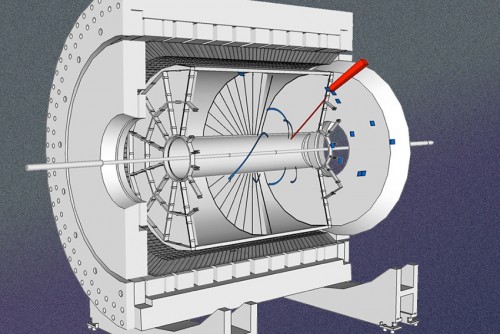 The STAR detector measures the energy and angle of the electron from the W boson decay produced in the proton-proton collision. Scientists use this information to determine how quarks and antiquarks of different flavors contribute to the spin of the proton.

Spin is a fundamental characteristic of elementary particles, similar to mass or electric charge, and is utilized daily in techniques such as magnetic resonance imaging. Yet, previous studies of the mechanics behind proton spin did not add up. An experiment at the Relativistic Heavy Ion Collider shows how the characteristics of an antiquark, a constituent of the proton, contribute to proton spin.

The proton “spin puzzle” began when experiments in the 1980s delved into quarks and antiquarks, both constituents in protons. The measurement reported here provides the first strong evidence that the proton’s antiquarks are spin polarized, which has important implications for understanding the proton’s internal structure and the mechanism through which antiquarks arise in the proton.

The proton is a composite particle, containing quarks of different types, or “flavors,” which are bound together by force-carrying particles, known as gluons. Utilizing longitudinally polarized proton collisions at the Relativistic Heavy Ion Collider (RHIC) at Brookhaven National Laboratory, the STAR experiment studies how quarks and antiquarks contribute to the spin of the proton. The quarks within the proton are probed through the production of weak force carrying particles, called W bosons. The analysis of the W bosons revealed a significant asymmetry in the number of W bosons produced, and the observed asymmetries indicate a positive “up” flavor antiquark and negative “down” antiquark polarization in the kinematic range covered at RHIC. This finding represents a critical step in understanding the role of antiquarks in the proton. In particular, it provides new input to the theoretical models that ascribe the origin of these antiquarks in the proton to particular mechanisms within the framework of the strong nuclear force, and these constraints will only be improved with additional data from RHIC. This research was led by physicists at the Massachusetts Institute of Technology.

This work was supported in part by the U.S. Department of Energy Office of Science and U.S. National Science Foundation. The MIT effort is supported by DOE-NP grant DE-FG02-94ER40818.