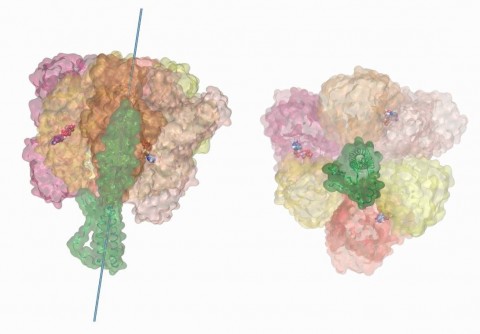 ATP hydrolysis-driven rotation of the central stalk in the V-type ATP synthase of the bacteria Enterococcus hirae depicts chemo-mechanical coupling of the molecular motor. These simulations were carried out on the Titan supercomputer using NAMD2.12. Visualization and movie rendering were completed on VMD1.9.3.

Newswise — Despite the grand diversity among living organisms, the molecule used to store and transmit energy within aerobic, or oxygen-using, cells is remarkably the same. From bacteria to fungi, plants, and animals, adenosine triphosphate (ATP) serves as the universal energy currency of life, fueling the processes cells need to survive and function.

Over the course of a day, an individual will typically use the equivalent of his or her bodyweight in ATP; however, the human body carries only a small amount of the molecule at any one time. That means cells must constantly recycle or replenish their limited capacity, relying on a highly efficient molecular motor called ATP synthase to do the job.

As part of a project dedicated to modeling how single-celled purple bacteria turn light into food, a team of computational scientists from the University of Illinois at Urbana-Champaign (UIUC) simulated a complete ATP synthase in all-atom detail. The work builds on the project’s first phase—a 100-million atom photosynthetic organelle called a chromatophore—and gives scientists an unprecedented glimpse into a biological machine whose energy efficiency far surpasses that of any artificial system.

First proposed under the leadership of the late Klaus Schulten, a pioneer in the field of computational biophysics and the founder of the Theoretical and Computational Biophysics Group at UIUC, the research has progressed under the stewardship of Abhishek Singharoy, co-principal investigator and a National Science Foundation postdoctoral fellow with UIUC’s Center for the Physics of Living Cells.

The UIUC-led team built and tested its mega-model under a multiyear allocation awarded through the Innovative and Novel Computational Impact on Theory and Experiment program on the Titan supercomputer, a Cray XK7 managed by the US Department of Energy’s (DOE’s) Oak Ridge Leadership Computing Facility (OLCF), a DOE Office of Science User Facility located at DOE’s Oak Ridge National Laboratory.

Using Titan, the team produced a virtual tool that can predict in exacting detail the chemical energy output of a photosynthetic system based on the amount of sunlight absorbed. The research could one day contribute to advanced clean energy technology that incorporates biological concepts.

“Nature has designed the chromatophore in such a way that it can generate enough ATPs for these bacteria to survive in low-light environments such as the bottom of ponds and lakes,” Singharoy said. “Our work captured this energy conversion process in all-atom detail and allowed us to predict its efficiency.”

Often referred to as the power plant of the cell, ATP synthase is a complex enzyme that speeds up the synthesis of its molecular precursors, adenosine diphosphate (ADP) and phosphate. Embedded within the chromatophore’s inner and outer membrane, the enzymatic motor consists of three major parts—an ion-powered rotor, a central stalk, and a protein ring.

Similar to a waterwheel that’s turned by the force of a flowing stream, the ATP synthase rotor harnesses the electrochemically spurred movement of ions, such as protons or sodium, from high concentration to low concentration across the membrane. The resulting mechanical energy transfers to the central stalk, which assists the protein ring in synthesizing ATP.

Remarkably, the process works just as well in reverse. When too many ions build up on the outer side of the chromatophore, the ATP synthase protein ring will break down ATP into ADP, a process called hydrolysis, and ions will flow back to the inner side.

“Normally, you would expect a lot of energy loss during this process, like in any man-made motor, but it turns out ATP synthase has very little waste,” Singharoy said. “How this motor is designed to minimize energy loss is the question we started asking.”

Similar to a tinkerer disassembling an engine to better understand how it works, Singharoy’s team broke down the 300,000-atom enzyme into its constituent parts. Drawing from decades of research into ATP synthase, past models, and new experimental data supplied by a Japanese team led by Takeshi Murata of the RIKEN Center for Life Science Technologies, the team constructed and simulated the pieces of the ATP synthase puzzle independently and together on Titan.

To capture important processes that play out over millisecond time scales, Singharoy, in collaboration with Christophe Chipot of the French National Center for Scientific Research and Mahmoud Moradi of the University of Arkansas, deployed the molecular dynamics code NAMD strategically. The team executed an ensemble strategy, tracking the motion of around 1,000 replicas of ATP synthase simultaneously with time steps of 2 femtoseconds, or 2,000 trillionths of a second. In total, the team accumulated 65 microseconds (65 millionths of a second) of simulation time, using this information to extrapolate motions that occur over the course of a millisecond (1 thousandth of a second).

As a result, the team identified previously undocumented swiveling motions in the protein ring that help explain the molecular motor’s efficiency. Similarly, the team’s simulations captured the rubber band–like elasticity of the enzyme’s central stalk. Singharoy’s team estimated that when paired with the protein ring, the stalk absorbs about 75 percent of the energy released during hydrolysis.

Additionally, simulations of the protein ring by itself revealed a unit that can function independently, a finding reported in experiments but not in computational detail. “Even in the absence of the center stalk, the protein ring itself is capable of ATP hydrolysis. It’s not very efficient, but it has the capability,” Singharoy said.

After simulating its complete ATP synthase model, the UIUC team incorporated the enzyme into its previously constructed chromatophore model to gain the most comprehensive picture of a photosynthetic system to date.

With this virtual biological solar panel, the team could measure each step of the energy conversion process—from light harvesting, to electron and proton transfer, to ATP synthesis—and better understand its mechanical underpinnings.

Nature’s chromatophore is designed for low-light intensity, only absorbing between 3 and 5 percent of sunlight on a typical day. The team, through the efforts of Sener, found this absorption rate translates to around 300 ATPs per second, which is the amount a bacterium needs to stay alive.

Having studied nature’s design, the team now wanted to see if it could improve upon it. Assuming the same amount of light intensity, the team designed an artificial chromatophore with a decidedly unnatural protein composition, boosting the presence of two types of specialized proteins. Analysis of the new design predicted a tripling of the photosynthetic system’s ATP production, opening up the possibility for the chromatophore’s human-guided optimization.

“You could potentially genetically modify a chromatophore or change its concentration of proteins,” Singharoy said. “These predictions promise to bring forth new developments in artificial photosynthesis.”

Under its latest INCITE allocation, the UIUC team is pivoting to energy conversion in a different lifeform: animals. Taking what it has learned from modeling photosynthesis in purple bacteria, the team is modeling cellular respiration, the process animal cells use to convert nutrients to ATP.

“You have at least two proteins in common between respiration and photosynthesis,” said Singharoy, who is continuing his involvement with the project as an assistant professor at Arizona State University. “The question is what design principles carry over into higher organisms?”

Simulation of the chromatophore—complete with ATP synthase—marks an ongoing shift in computational biophysics from analyzing individual cell parts (e.g., single proteins and hundreds of atoms) to analyzing entire cell systems (e.g., hundreds of proteins and millions of atoms).

Schulten, who passed away in October 2016, understood better than most people the significance of using computers to simulate nature. In an interview in 2015, he laid out his rationale for modeling the chromatophore. “The motivation is to understand a very key step of life on Earth on which all life depends today. Energy-wise 95 percent of life on Earth depends on photosynthesis, including humans,” he said.

Schulten also understood the milestone a specialized organelle represented on the road to simulating a complete single-celled organism. “We don’t have anything smaller than a cell that we would call alive,” he said. “It’s the smallest living entity, and we want to understand it.”

With next-generation supercomputers, including the OLCF’s Summit, set to come online in 2018, the research group Schulten founded in 1989 is preparing to take on the grand challenge of simulating a cell.

Under the leadership of Tajkhorshid, the team plans to simulate the first billion-atom cell, including the basic components a cell needs to survive and grow. Improvements to NAMD and work being done under the OLCF’s Center for Accelerated Application Readiness program are helping to make the vision of Schulten and others a reality.

The National Institutes of Health and the National Science Foundation provided the primary support for this work.  Part of the research was performed at the Photosynthetic Antenna Research Center, a DOE Energy Frontier Research Center led by Washington University in St. Louis and supported by DOE’s Office of Science.