This discovery could lead to low-cost, non-toxic, biological components for light-weight electronics. 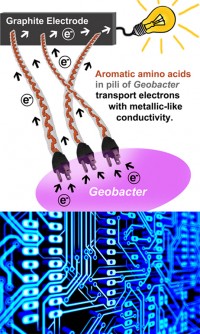 The discovery that electrically conductive, hair-like filaments on the surface of Geobacter bacteria exhibit metallic-like conductivity (top) could mark a new paradigm for the employment of biological materials in nanoscale electron devices (bottom).

Although proteins are usually electrically insulating, hair-like nanoscale filaments (called pili) on the surface of Geobacter bacteria exhibit metallic-like conductivity. To understand why pili are conductive, scientists from the University of Massachusetts at Amherst, Holy Cross, and Brookhaven National Laboratory recently used X-ray diffraction to analyze the structure of the filaments. They found that the electronic arrangement and the small molecular separation distances (~0.3 nanometers) give the pili an electrical conductivity comparable to that of copper.

These findings can provide useful feedback for studies targeting the enhancement of pili’s electrical conductivity through genetic engineering, which subsequently could be used to construct low-cost, non-toxic, nanoscale, biological sources of electricity for light-weight electronics and for bioremediation.

Direct measurement of multiple physical properties of Geobacter sulfurreducens pili have demonstrated that they possess metallic-like conductivity, but several studies have suggested that metallic-like conductivity is unlikely based on the structures of the G. sulfurreducens pilus predicted from homology models. To further evaluate this discrepancy, pili were examined with synchrotron X-ray microdiffraction and rocking-curve X-ray diffraction. Both techniques revealed a periodic 0.32-nm spacing in conductive, wild-type G. sulfurreducens pili that was missing in the nonconductive pili of strain Aro5, which lack key aromatic acids required for conductivity. The intensity of the 0.32-nm peak increased 100-fold when the pH was shifted from 10.5 to 2, corresponding with a previously reported 100-fold increase in pilus conductivity with this pH change. These results suggest a clear structure-function correlation for metallic-like conductivity that can be attributed to overlapping orbitals of aromatic amino acids. A homology model of the G. sulfurreducens pilus was constructed with a Pseudomonas aeruginosa pilus model as a template as an alternative to previous models, which were based on a Neisseria gonorrhoeae pilus structure. This alternative model predicted that aromatic amino acids in G. sulfurreducens pili are packed within 0.3 to 0.4 nm, consistent with the experimental results. Thus, the predictions of homology modeling are highly sensitive to assumptions inherent in the model construction. The experimental results reported here further support the concept that the pili of G. sulfurreducens represent a novel class of electronically functional proteins in which aromatic amino acids promote long-distance electron transport.

The mechanism for long-range electron transport along the conductive pili of G. sulfurreducens is of interest because these “microbial nanowires” are important in biogeochemical cycling as well as applications in bioenergy and bioelectronics. The studies reported here provide important structural insights into the mechanism of the metallic-like conductivity of G. sulfurreducens pili. This information is expected to be useful in the design of novel bioelectronic materials.

This research was supported by the Office of Naval Research (grant no. N00014-12-1-0229 and N00014-13-1-0550). Research was carried out in part at the Center for Functional Nanomaterials, Brookhaven National Laboratory, which is supported by the U.S. Department of Energy, Office of Science, Office of Basic Energy Sciences, under contract no. DE-AC02-98CH10886. Nikhil S. Malvankar holds a Career Award at the Scientific Interface from the Burroughs Wellcome Fund.