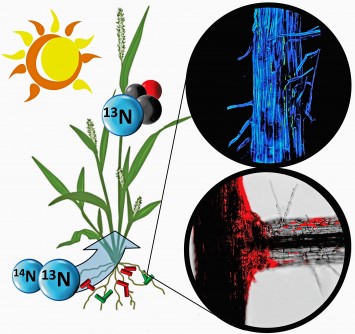 This illustration shows the absorption of the Nitrogen-13 radiotracer, which is later detected inside the shoots and leaves. The confocal microscopy of Setaria grass roots (top and bottom insets) show mutant strains of Azospirillum brasilense and Herbaspirillum serpedicae with heavy colonization around branch roots and the elongation of primary roots. The Brookhaven-made nitrogen isotope enabled direct quantification of biological nitrogen fixation and provided evidence for biological transport and metabolism by the host plant. 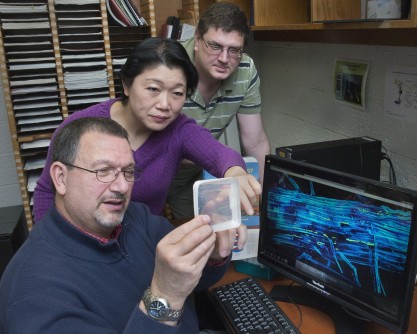 Brookhaven Lab scientists (from left to right) Richard Ferrieri, Youwen Xu, and Michael Schueller examine an agar plate on which bacteria colonize. These plates are used to propagate and maintain healthy bacteria colonies until needed for plant inoculation.

Newswise — With rising populations and changing climate conditions, the need for resilient and reliable crops has never been greater. Nitrogen—an essential element for plant growth—is often woefully absent in heavily farmed land. Earth’s atmosphere offers an overabundance of nitrogen, but how can it be safely and sustainably transferred into the soil? Nitrogen-eating bacteria may be the answer.

An international team of researchers, including three from the U.S. Department of Energy’s Brookhaven National Laboratory, has tracked nitrogen as soil bacteria pull it from the air and release it as plant-friendly ammonium. This process—called biological nitrogen fixation, or BNF—was found to substantially promote growth in certain grass crops, offering new strategies for eco-friendly farming.

“Our results show that healthy growth can be achieved by combining certain soil bacteria with grasses, even when plants are grown in extremely nitrogen-deprived soil,” said study coauthor Richard Ferrieri, director of Brookhaven Lab’s Radiochemistry and Biological Imaging Program. “We plan to apply this method to other crop systems, including bioenergy grasses like sorghum, switchgrass, and miscanthus, and even to food crops like corn and wheat.”

The scientists measured the effects of two BNF soil bacteria—Azospirillum brasilense and Herbaspirillum seropedicae—on growth of the grass Setaria viridis. The study shows the first direct evidence of BNF by tracking the presence of a nitrogen radiotracer as it was absorbed first by the bacteria and then moved through the plant. The results, published in the March issue of The Plant Journal, revealed substantial increases in height, weight, and root length.

“The bacteria we are using are currently among those sold as crop inoculants in South America, but this technology is not widely applied in the U.S.,” said study coauthor Gary Stacey, a scientist at the University of Missouri. “We hope that our findings will stimulate others to look at this area, which we believe holds real promise for promoting more sustainable agriculture, especially with regard to biofuel crops”.

Nitrogen—chemically bound as dinitrogen gas—is the most abundant element in the atmosphere. Unfortunately, plants can only absorb it after it is integrated into the soil as nitrate and ammonium. This process often happens through natural cycles of plant and animal decay, which can take too long to be commercially viable. Instead, fertilizers are typically introduced to maintain high crop yields.

“Many commercial fertilizers focus primarily on infusing soil with chemical forms of nitrogen,” Ferrieri said. “However, this is a costly process that can result in excessive nitrogen runoff into waterways, sometimes causing severe ecological damage.”

Certain bacteria, however, can restrict their activities to specific root systems and use abundant, airborne nitrogen. The soil becomes locally enriched after BNF inoculation, avoiding the risks of large-scale chemical intervention.

The scientists used Brookhaven’s Cyclotron—a small accelerator dedicated to isotope production—to produce the nitrogen radiotracer, which was then introduced to the soil in a stream of air. Once absorbed, the radioactive nitrogen emitted bursts of antimatter particles that were detected by phosphor plates, which behave like photosensitive film. The team then used a simple radiation detector to track the movement of radiotracers into the plant’s shoots and leaves. Then, to map metabolic turnover, the team dissected plant tissue to reveal the nitrogen within photosynthesis proteins.

“This radiotracer only has a half-life of 10 minutes, meaning it becomes inactive and undetectable very quickly,” Ferrieri said. “Gathering biological data within such a short time was one of our biggest challenges.”

“The leaf biochemistry of the S. viridis grass closely matches bioenergy crops, which may facilitate the practical applications of the study,” Stacey said. “My colleagues and I tested 30 candidate grass genotypes, identifying three that responded to BNF and one in particular—called A10.1—that was very active.”

That targeted genotype was also sequenced by the Joint Genome Institute, a DOE Office of Science User Facility, which will eventually give scientists the molecular information needed to pinpoint the mechanisms regulating BNF.

“We’re bringing all guns to bear on this system to tease out any physiological, metabolic, proteomic, or transcriptional basis for BNF,” Ferrieri said. “Brookhaven’s radiotracer tools offer a singular window into plant metabolism and plant-microbe interactions.”

Ferrieri and Stacey will continue this work at another DOE Office of Science User Facility, Pacific Northwest National Laboratory’s Environmental and Molecular Science Laboratory, where two research proposals were recently approved. The two scientists will probe changes in plant proteins and metabolites under a variety of growth conditions. Stacey’s group is also actively working to isolate genetic commonalities and differences in these plants to accelerate research and reveal the molecular BNF mechanism.

The work was supported by DOE’s Office of Science, the Brazilian Research Council, Brazil’s Ciencia Sem Fronteiras Program, and the SUNY School of Environmental Science and Forestry. 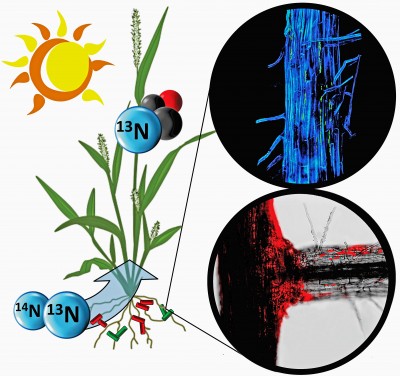 Caption: This illustration shows the absorption of the Nitrogen-13 radiotracer, which is later detected inside the shoots and leaves. The confocal microscopy of Setaria grass roots (top and bottom insets) show mutant strains of Azospirillum brasilense and Herbaspirillum serpedicae with heavy colonization around branch roots and the elongation of primary roots. The Brookhaven-made nitrogen isotope enabled direct quantification of biological nitrogen fixation and provided evidence for biological transport and metabolism by the host plant. 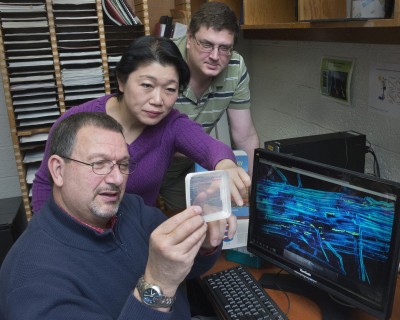 Caption: Brookhaven Lab scientists (from left to right) Richard Ferrieri, Youwen Xu, and Michael Schueller examine an agar plate on which bacteria colonize. These plates are used to propagate and maintain healthy bacteria colonies until needed for plant inoculation.