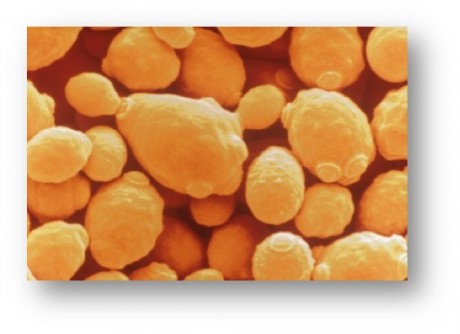 A yeast engineered by Mascoma and BESC could hold the key to accelerating the production of ethanol in the U.S.

The approach could provide a pathway to eventual expansion of biofuels production beyond the current output limited to ethanol derived from corn.

C5 FUEL™, engineered by researchers at Mascoma and BESC, features fermentation and ethanol yields that set a new standard for conversion of biomass sugars from pretreated corn stover—the non-edible portion of corn crops such as the stalk—converting up to 97 percent of the plant sugars into fuel.

Researchers announced that while conventional yeast leaves more than one-third of the biomass sugars unused in the form of xylose, Mascoma’s C5 FUEL™ efficiently converts this xylose into ethanol, and it accomplishes this feat in less than 48 hours. The finding was presented today at the 31st International Fuel Ethanol Workshop in Minneapolis.

"The ability to partner the combined expertise at Mascoma and BESC in engineering microbes to release and convert sugars from lignocellulosic biomass has greatly accelerated the translation of basic research outcomes to a commercial product," BESC Director Paul Gilna said.

Gilna noted that this success and continued efforts through BESC could go a long way toward reducing the cost of ethanol and growing the number of commercial-level ethanol production plants. A key focus of BESC is to use basic research capabilities and expertise to validate the consolidated bioprocessing approach to improve cost competitiveness.

"Driving down the cost to develop, verify and consolidate bioprocessing was at the heart of the BESC effort when we began in 2007, and this achievement allows us to advance to the next challenge," Gilna said. "This accomplishment represents a clearly impactful example of how our partnering with industry can accelerate the translation of our research capabilities and findings into commercial products.”

Although cellulosic biomass such as corn stover, wheat straw and bagasse (the fibrous remains after sugar is extracted from sugarcane or sorghum) is abundant and cheap, because of recalcitrance — a plant's resistance to releasing sugars for conversion to alcohol -- it is much more difficult to utilize than corn. However, Mascoma's new strain of yeast, which is one of many strains Mascoma developed as part of BESC over the last two years, proved highly effective at xylose conversion.

While most processing methods simply convert cellulose to sugar, this new approach also converts hemicellulose, which significantly increases overall sugar yield and thereby increases the level of ethanol produced. In fact, the new strain of yeast simultaneously yields 97 percent conversion of xylose and glucose—and does so in a significantly shorter period of time than existing approaches.

Kevin Wenger, executive vice president of Mascoma, a subsidiary of Lallemand Inc. (http://www.lallemand.com), shares Gilna's enthusiasm and emphasized that the BESC model of collaboration made this result possible.

“The scientific and technical resources that we have had access to as a member of BESC for the past six years have made possible the development of this uniquely high-performing yeast product,” Wenger said. “This is just the start of a pipeline of second-generation yeast products planned by Mascoma and Lallemand Biofuels and Distilled Spirits.”

The next step for BESC will be to demonstrate and again validate the application of the consolidated bioprocessing approach using thermophilic, or heat-loving, bacteria to produce biofuels directly from biomass in a single process.

Led by Oak Ridge National Laboratory, BESC (http://bioenergycenter.org/besc/index.cfm) is one of three DOE Bioenergy Research Centers established by the DOE's Office of Science in 2007. The centers support multidisciplinary, multi-institutional research teams pursuing the fundamental scientific breakthroughs needed to make production of cellulosic biofuels, or biofuels from nonfood plant fiber, cost-effective on a national scale. The three centers are coordinated at ORNL, Lawrence Berkeley National Laboratory and the University of Wisconsin-Madison in partnership with Michigan State University.

Cutline: A yeast engineered by Mascoma and BESC could hold the key to accelerating the production of ethanol in the U.S.