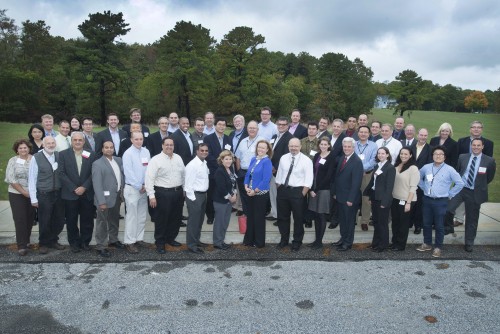 Some of the participants in The Resilient Smart Grid workshop held at Brookhaven National Lab.

Brookhaven Lab has held several workshops on Smart Grid issues over the past few years. The more than 40 individuals who heard Ton’s remarks represented utilities both in the Northeast region and as far afield as Arizona; five Department of Energy labs; several academic institutions, including Stony Brook University and Georgia Tech; the New York State Energy Research and Development Authority (NYSERDA); utility consultants; and other organizations including New Jersey’s Department of Homeland Security and Catholic Health Services of Long Island. In outlining the DOE Office of Electricity’s research priorities in support of grid resilience, Ton emphasized the role of microgrids in reducing the number and duration of outages during and after a storm.

“Microgrids are one tool in the resiliency toolbox, although there are very few,” said Sustainable Energy Technologies Department Chair Pat Looney, whose department hosts the Smart Grid workshops.

The DOE defines a microgrid as “a group of interconnected loads and distributed energy resources within clearly defined electrical boundaries that acts as a single controllable entity with respect to the grid. A microgrid can connect and disconnect from the grid to enable it to operate in grid-connected or island mode.”

A classic example of a microgrid is a university campus or a hospital with on-site generation capability, where there's a single point of interconnection through which electricity is distributed and used throughout the facility. Princeton University, for example, is a microgrid.

“With emerging concepts and technology in terms of hardware and software for grid design, microgrid architectures are changing,” Looney said. “There are a whole host of new design paradigms that are being explored. One of those concepts envisions adaptable microgrids — microgrids that could be stood up and programmed by a utility ‘on the fly’ — taking advantage of distributed energy generation capabilities. These are very forward thinking concepts.

“Brookhaven Lab could be a microgrid if we could generate enough electricity on site to sustain our operations, which is hard to do with the National Synchrotron Light Source II and Relativistic Heavy Ion Collider,” he said, referring to the large power needs of those scientific facilities. “But it could be done for some parts of the Laboratory’s grid — and that’s what we’re trying to do with the power generated by the Northeast Solar Energy Research Center (NSERC).”

NSERC will serve as a solar energy research and test facility for the solar and renewable energy industry. It will include a solar PV research array for field testing new technologies under actual weather conditions in the Northeast, and offer the ability for companies and utilities to test new power inverter and utility-scale energy storage technologies.

The DOE has been actively promoting microgrids for several years. Notably, as part of a commitment to provide support to communities affected by Superstorm Sandy, DOE has partnered with the State of New Jersey, NJ Transit, and the New Jersey Board of Public Utilities to help develop a conceptual design of an advanced microgrid system. The NJ Transit system provides a critical transportation corridor and evacuation route for Manhattan, and Superstorm Sandy exposed the vulnerability of the transit system to power outages.

The Energy Department and Sandia National Laboratories (SNL) will work with NJ Transit to design a dynamic microgrid to power the transit system between Newark and Jersey City and Hoboken along with critical stations and maintenance facilities. This project will make it easier to get the power back on after a major disaster. SNL has already designed advanced microgrids that are up and running at more than 20 military bases across the country using advanced smart grid technologies and integrating distributed energy resources like wind generation, photovoltaics, and storage.

Another speaker at the workshop was former Brookhaven Lab Associate Director Gerald Stokes, now a visiting professor at Stony Brook. Stokes spoke about the Advanced Electric Grid Innovation and Support (AEGIS) Center, a proposed collaborative research facility serving the Northeast, specifically targeted at the emerging challenges facing the electric distribution system. The facility would be constructed to support missions involving research, training, post-event analysis, and the demonstration and testing of new technologies. The research could lead to greater grid resilience and reliability — including fast recovery and lower costs.

“Over the past four years, Brookhaven Lab has spent a lot of time trying to develop a deeper understanding of the needs and circumstances of the distribution utilities of the Northeast,” Stokes said. “Working with various utilities and Robert Broadwater of Electrical Distribution and Design, Inc., who has been developing software for over 30 years and designed the Distribution Engineering Workstation for the Electric Power Research Institute, the staff concluded that the ‘intelligence’ in the smart grid is going to ultimately come from and be reflected in simulation,” Stokes said.

The workshop also featured a presentation on the proposed Brookhaven Lab Northeast Emergency Management Academy. Richard Ohlsen of the Lab’s Nonproliferation and National Security Department said the Academy’s goal is to provide comprehensive and immersive training on emergency and incident management to individuals and teams. The Academy will train utility emergency managers, among others, on the incident management process used by government and communities.

Students will qualify through the performance-based qualification system implemented for Incident Management Teams by the Federal Emergency Management Agency. The Academy is envisioned as a partnership between Brookhaven Lab and two small businesses: AlphaTrac, an emergency management firm, and A.W. Webber, a firm that specializes in incident management. Brookhaven Lab will contribute its expertise in damage prediction tools, grid modeling and planning, exercise development, and facilitation and training.

Brookhaven Lab Smart Grid Manager Stephanie Hamilton said that the workshop was the best attended and most diverse so far.

“We had more utilities and more national labs — Sandia, Fermi, Savannah River, Los Alamos and NREL — outside of Brookhaven coming here not only to talk but also to listen,“ Hamilton said.

Looney, Ohlsen, and Hamilton agreed that a highlight of the workshop was a brainstorming session framed around Ton’s keynote address. They plan to schedule more such sessions at the next workshop, scheduled for April 16-17, 2015. That date will coincide with the first training session at the Northeast Emergency Management Academy.