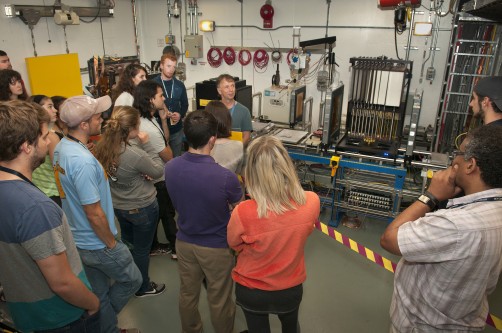 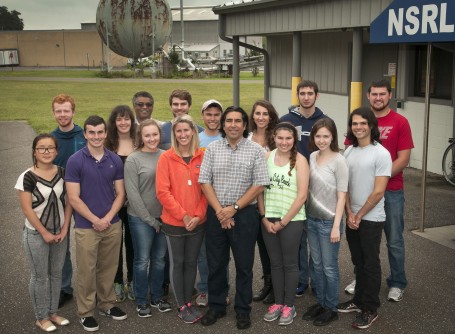 Brookhaven researcher Louis Peña, pictured center with his students and Stony Brook nuclear chemist Roy Lacey, is the director of the Summer School in Nuclear and Radiochemistry.

Newswise — For the past six weeks, 12 college students have had the opportunity to learn all that the U.S. Department of Energy’s (DOE) Brookhaven National Laboratory has to teach about a vital but often overlooked area of chemistry—one that spans everything from nuclear reactors and the safe handling of nuclear material to hospital diagnostic tools and cutting-edge medical research. Sponsored by the DOE and the American Chemical Society, the Summer School in Nuclear and Radiochemistry is now entering its thirtieth year instructing some of the country’s best and brightest undergraduates in all things nuclear science.

“Nuclear chemistry focuses on things related to nuclear power, the nuclear fuel cycle, nuclear weapons, astrophysics, and nuclear physics,” explained Louis Peña, the director of the summer school and a researcher in Brookhaven’s Biological, Environmental and Climate Sciences Department. “Radiochemistry is the sub-discipline that involves attaching radioactive atoms to molecules, which is used largely for medical imaging, therapy, and research. And you need the same basic background to do both nuclear chemistry and radiochemistry.”

To get that background, students live on site at Brookhaven for six weeks, during which time they receive instruction from visiting faculty from across the U.S. as well as Brookhaven scientists. Brookhaven offers its own particular advantages as one of the two locations for the school, along with San Jose State University on the west coast.

Not only do the students at Brookhaven get rare opportunities to see facilities like the Relativistic Heavy Ion Collider (RHIC), the National Synchrotron Light Source II (NSLS-II), and the NASA Space Radiation Laboratory (NSRL) up close, but they also get to work with with the actual materials that are essential to nuclear science: the radioactive isotopes of elements, or radioisotopes.

“Colleges don’t always have advanced scientific facilities, and they rarely have facilities that allow students to handle radioisotopes,” said Peña. “That’s actually one of the reasons the course is at Brookhaven. We want them to get the opportunity to work with the materials, with actually handling radioisotopes.”

Brookhaven places heavy emphasis on safety during this practical work, including specialized training for all students and expert supervision of all activities.

The summer school makes a point of bringing in those students whose prior undergraduate experience will not have exposed them to the practical side of nuclear chemistry. It’s that ability to take the science out of the theoretical realm that has left a particularly lasting impact on the students.

“The basics of radioactive decay might be pretty simple,” said Trev Thompson, a student in the program from the University of Texas at Tyler. “But getting into it and understanding the actual methods add so much. I discovered all these areas in which the principles of radioactivity actually apply.”

The very fact that this summer school works with undergraduates makes it unusual as a nuclear science program. Because this is such a specialized field, most chemists and physicists don’t start working in the field until the graduate or postdoc level. Indeed, the summer school was founded 30 years ago in part to establish a pipeline, one in which students would come to nuclear and radiochemistry much earlier in their careers.

“There’s a vital need for this expertise, and it’s important to reach back sooner,” said Peña, who pointed to the national security advantages of starting to train nuclear chemists as early as possible. “For example, you may need to analyze whether yellowcake uranium is coming from a certain mine in one country or another. Someone has to know how to do that. It’s that specialized level of expertise that we need to continue developing within our country for national security purposes.”

While this strategic need provides immediate justification for reaching and training the nuclear scientists of tomorrow as early as possible, it’s just one aspect of an important scientific discipline with broad applications that cross into other specialties—as student participants have recognized during their time at the Laboratory.

“You see a lot of different connections between fields,” said James Johnstone from Abilene Christian University. “I came in thinking, ‘Oh, okay, I want to be a chemist,’ but then you realize that chemists work with biologists, and you also work with physicists, and everybody else.”

“I think the coolest thing is the exposure to different applications of nuclear science that we’re learning,” added Kathy Shield from Tufts University. “We’ve had different professors that have come in and told us about biomedical applications, peer research applications, and more. It’s really interesting to see all the different places that potential future careers could go.”

The summer school also carries forward Brookhaven’s historical legacy as a nuclear medicine research facility. As Peña pointed out, positron emission tomography—better known as PET scanning—was largely invented at Brookhaven. Going back to the 1950s and 60s, the Lab played a crucial role in the development of radiotracers like technetium-99m. Radiotracers are compounds that can be used to chart the path of chemical reactions inside the body, making them invaluable diagnostic tools.

“Then there’s Joanna Fowler and all the people who developed FDG, another major radiotracer that’s used across the world,” said Peña. “More than 90 percent of all clinical PET scans use it, and that was invented here.”

“We went to Memorial Sloan-Kettering,” said Johnstone, referring to a summer-school-organized field trip to the world-leading cancer center in New York City. “We got to see firsthand examples of the millions of people diagnosed each year using radioisotopes. I came in thinking of nuclear science in terms of energy and nuclear power plants. But now you realize there’s a lot of other places where nuclear science gets used and how it applies to the everyday person.”

The summer school also includes visits to onsite research facilities, like NSRL and RHIC, which explore the potential risks of radiation to astronauts and the fundamentals of nuclear science, respectively.

“Another area we talk about is environmental remediation,” said Peña. “For instance, if you have radioactive materials that are buried, or if you want them stored long-term, how do you quantify their leaching radiation into the ground?” Learning how to answer those questions brings the summer school students into contact with visiting Notre Dame scientists from geological and environmental disciplines.

The students enjoy the respect conferred by the program’s longstanding reputation.

“When we go to these amazing places, both inside and outside Brookhaven, the scientists talk to us like we’re scientists,” said Shield. “They explain the technical details when we ask the technical questions, and they wouldn’t necessarily be explaining it that way to just your average group off the sidewalk. And I think it’s really impressive that the program manages to get the respect from the professionals and that they give us their time even though we’re just a bunch of students.”

But then, that’s the point of the summer school: The undergraduates of today will be the scientists of tomorrow. About a fifth of the program’s alumni do end up pursuing nuclear or radiochemistry at the graduate level, while another half of the students go into advanced chemistry, physics, or nuclear science, with others going on to medical school or careers in industry. In all cases, though, they get to carry forward the unique skills and experiences they gained at Brookhaven Lab. 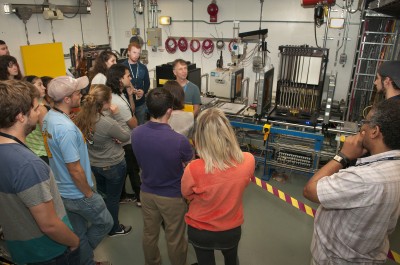 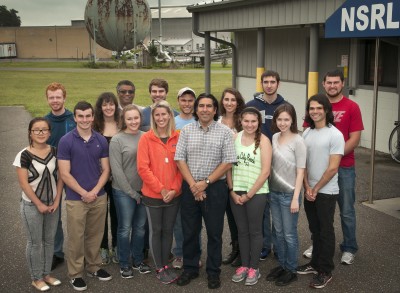 Caption: Brookhaven researcher Louis Peña, pictured center with his students and Stony Brook nuclear chemist Roy Lacey, is the director of the Summer School in Nuclear and Radiochemistry.