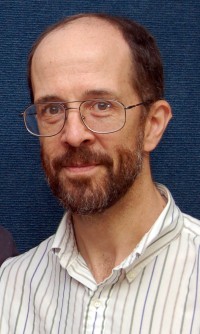 Newswise — Ames Laboratory physicist Paul Canfield has always been a vocal proponent of his field, condensed matter physics, but he’s about to take it up a notch. In March, Canfield will begin a four-year leadership stint heading up the Condensed Matter Physics Division of the American Physical Society. APS recently announced that Canfield had been elected vice-chair of the CMP division.

“I just finished up a three-year tour as a member-at-large for the condensed matter division,” Canfield said, “and they asked if I be willing to stand for election to the executive line. Initially, I’ll serve a year as vice-chair, then an additional year each as chair-elect, chair, and finally former chair.”

According to Canfield, the division executives are primarily responsible for planning the APS annual “March” meeting, along with representing the division at various meetings throughout the year.

“I expect, at given times of year, it will be fairly time-consuming, but hopefully not cripplingly so,” he said. “But I’m happy to serve because APS is the premier physics organization in the world and it’s my “home” so to speak.”

The new position is just Canfield’s latest service to his profession. He previously served two tours as an editor at Physical Review Letters, and has shared his knowledge abroad, teaching at the Universidad Autonoma de Madrid in Spain. It was during a 2014 stop in Spain, where he unexpectedly wound up being the face of condensed matter physics in a video project and part of the inspiration for the subsequent documentary that was funded by APS.

“During a visit to Madrid, I met Isabel Guillamón, who’d just received an APS Outreach Grant to develop a film that helped explain how condensed matter physics affects everyday life,” Canfield said. “I suggested a number of things and we continued to talk and she finally asked me to ‘wear a clean shirt tomorrow because I’m going to film an interview with you.’ So, we set up in a colleague’s office with lights and the whole works and I spent two hours waxing philosophical on CMP.”

That interview was edited down to about seven and a half minutes in what became the initial result of the So-Close project and the springboard for a 20-minute animated documentary, “So Close and Such a Stranger: a documentary about Condensed Matter Physics.” Guillamón, Elsa Prada, and Enrique Sahagún produced the film and credit Canfield near the end “for his encouragement, ideas and critical review” of the finished work.

“It was the weirdest thing that APS provided these two Spanish women with funds to make this and they wind up with me,” he said. “It was great fun and part of what I try to do as public outreach.”

The film has garnered Canfield some acclaim even though you won’t find it on Netflix.“A colleague of mine at Georgetown University who does bio-physics, called me the other day and said, ‘Oh my God, I saw your video,’” Canfield said. “She was looking for something to show her solid-state class and ran across the video and told me it was like I’d stolen her ideas for what she wanted to get across to them. So there’s been some interesting feedback.”