Carbon in Floodplain Unlikely to Cycle into the Atmosphere 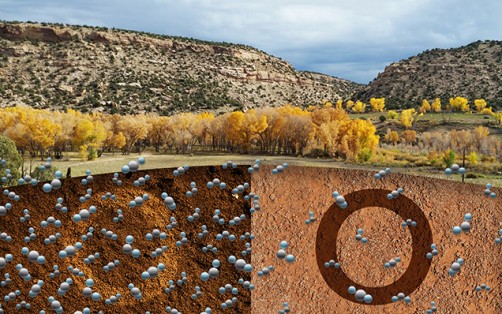 Newswise — In the soils under your feet, microbes drive decomposition of organic carbon. The microbes’ metabolic activity releases carbon dioxide and methane into the atmosphere. A recent study showed microbes do not decompose nearly half the water-soluble organic carbon stored in oxygen-poor, anoxic, floodplain sediments. Why? Because the carbon does not provide enough energy to sustain cellular growth in the microbes.

These findings enhance our understanding of biogeochemical cycles. For example, the release of these gases into streams and rivers influences algal growth. Releases directly to the atmosphere are important to understand because they might improve long-term projections of atmospheric conditions.

Large amounts of carbon are stored in soils and terrestrial subsurface sediments, particularly in oxygen-limited environments such as wetlands and the subsurface of floodplains. Elucidating factors that influence microbial decomposition of organic carbon is critical for understanding biogeochemical cycles and for accurately estimating carbon release into the atmosphere, both as gases and dissolved phases. Researchers from SLAC National Accelerator Laboratory; the Environmental Molecular Sciences Laboratory (EMSL), a DOE Office of Science user facility; Lawrence Berkeley National Laboratory; and Stanford University examined the chemical composition of organic carbon from four floodplains across the Upper Colorado River Basin. The floodplains contained oxygen-depleted (sulfidic) sediments, which support the metabolic activity of sulfate-reducing microbes, and oxygen-rich (non-sulfidic) sediments, which do not support microbial sulfate reduction. To conduct the study, the team used the 12-Tesla Bruker SolariX Fourier transform ion cyclotron resonance mass spectrometer (FT-ICR-MS) at EMSL. This analysis revealed that microbes do not decompose nearly half the water-soluble organic carbon stored in oxygen-poor subsurface sediments because carbon does not provide enough energy to sustain cellular growth. Specifically, the oxidation state of carbon was lower in sulfidic sediments than in non-sulfidic sediments, suggesting microbes leave behind highly reduced carbon, such as lipids, because they prefer to use thermodynamically favorable, more oxidized carbon, such as carbohydrates (sugars) for sulfate reduction. Due to these energetic constraints on microbial activity, a large amount of organic carbon remains trapped in oxygen-limited sediments instead of being released into the atmosphere. The findings reveal that thermodynamic limitations on microbial metabolism play a previously underappreciated role in carbon preservation in oxygen-limited soils and sediments. Further, they illuminate a pathway by which fuel for microbes is transported from sediments into streams and rivers, which can lead to algal growth.