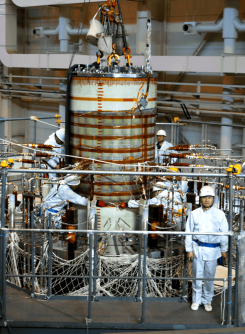 The insert coil being lowered into the test facility at Naka, Japan.

Newswise — In another step towards building the ITER fusion reactor, the US ITER team worked with international partners to verify the performance of the ITER central solenoid conductor. Using a US-designed “insert coil” or test coil inserted in a large high-field magnet, the international team tested the central solenoid conductor at the Japan Atomic Energy Agency test facility in Naka, Japan and evaluated the findings. Results showed that the conductor performed as predicted, without degradation.

The ITER central solenoid is now under fabrication at General Atomics in Poway, Calif., using conductor provided by Japan. The 1,000 metric ton electromagnet, known as the heartbeat of ITER, will provide the majority of the magnetic flux needed to start and sustain ITER’s plasma current. Over 42 kilometers of conductor will ultimately be wound into pancakes and assembled into the modules of the central solenoid. The electromagnet will have a magnetic field strength of up to 13 Tesla, or about 260,000 times the Earth’s magnetic field.

“The testing in Naka verified conductor performance under conditions comparable to what the conductor will experience inside the ITER tokamak —including temperature, magnetic field, current, and mechanical strain,” said US ITER magnet team leader Wayne Reiersen.

Testing conductor before it is installed in the ITER machine is part of confirming the ITER design and assuring that the conductor will perform in the demanding ITER environment. ITER, which will be the largest tokamak ever built, will employ multiple superconducting magnet systems to confine plasma of over 100 million degrees within a vacuum vessel inside the 10-story tall tokamak.

The insert coil and test plan, which is part of US responsibility for the central solenoid, turned out to be useful to address concerns about conductor degradation from tests of an earlier conductor design at the SULTAN (SupraLeiter Test Anlage) facility of the Paul Scherrer Institute in Switzerland. An improved conductor design was tested again at SULTAN. The SULTAN test sample uses two parallel conductors with hairpin turns and an 11 Tesla background field. Insert coil testing was then performed in 2015 at Naka at full field (13 Tesla) using a circular insert coil composed of 50 meters of this improved conductor wound nine turns high. This test is representative of the actual central solenoid module coil because the conductor develops an axial strain as it is energized. The SULTAN tests did not impose any axial strain on the conductor sample.

Nicolai Martovetsky, who serves as the R&D manager and chief engineer for US ITER magnet systems, said, “The first test campaign of the insert showed that the conductor performed as expected and confirmed the findings from SULTAN. We then began cycling to 16,000 times with the full ITER scenario load and no degradation was noted. We also went through three warm-ups and cool-downs, which used to degrade the earlier conductor design, but the new design showed no degradation. This characterizes the conductor and gives a prediction of ITER performance.”

Warm-up exposes the magnet to room temperature, while cool down is to 4 degrees Kelvin.

“There is a lot of margin established for the conductor from these test results,” said Reiersen. “This is significant for our confidence in the central solenoid conductor design.”

US ITER’s Martovetsky and Alexandre Smirnov led the design with analysis support from Andrei Khodak from Princeton Plasma Physics Laboratory. Martovetsky also oversaw fabrication of the insert coil at Mitsubishi Electric Company in Japan. The insert coil test and analysis involves researchers from the international ITER community plus the ITER Organization.

In addition to the central solenoid insert, a toroidal field insert coil has also been fabricated and will undergo testing in 2016 to assess performance for the toroidal field magnet system.

US participation in ITER is sponsored by the U.S. Department of Energy Office of Science (Fusion Energy Sciences) and managed by Oak Ridge National Laboratory in Tennessee, with contributions by partner labs Princeton Plasma Physics Laboratory and Savannah River National Laboratory. For more information, see usiter.org.