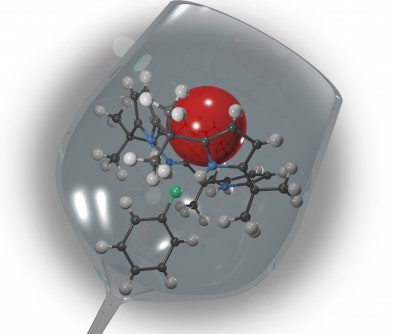 In unbound calyx[4]pyrrole, two pyrrole “petals” are flipped up and two, down. With the addition of a phenol, all four pyrrole petals flip up to form a cup, shown here, that traps radioactive cesium.

Newswise — Atomic charges in chemical solutions are like Switzerland—they strive for neutrality. The tendency to balance charges drives dynamics when charged atoms or molecules, called ions, are present in solutions. Recently, researchers at the Department of Energy’s Oak Ridge National Laboratory have found new ways to influence selectivity for specific positively charged ions (cations) with the addition of simple receptors, not for cations but rather for negatively charged ions (anions). This discovery, which provides a new twist on selectivity, proves that adding an anion receptor can affect the selectivity of extractants used to separate metals. Better selectivity via the addition of anion receptors to enhance discrimination between metals, such as sodium and cesium, could improve future environmental cleanup efforts.

“This is the first instance of using an anion receptor to enhance selectivity for a cation,” said Neil Williams of ORNL’s Chemical Separations Group. He presented this work in Honolulu in December at Pacifichem 2015 (which convenes chemists from Pacific Rim nations including Japan, China and Australia who might not normally attend a scientific meeting in the United States). “The basic research shows that you can modify the selectivity of an extractant using an anion receptor. This proof of principle could have future broader implications in removal of contaminants like cesium from ocean water, groundwater or nuclear waste in storage tanks.”

The project takes a novel approach conceived by principal investigator Bruce Moyer of ORNL. Moyer pioneered the use of host–guest chemistry in separations—in which complexes of two or more molecules or ions are held together in structural relationships by forces other than those of full covalent bonds—for cleaning up legacy radioactive waste at DOE sites. His fundamental research into trapping cesium was applied in a process that was engineered and scaled up by partners at Argonne, Idaho, Pacific Northwest, Oak Ridge and Savannah River national laboratories. It was deployed in a nuclear-waste treatment plant that since 2008 has processed more than 5.5 million gallons of high-level radioactive waste at the Savannah River Site.

Such research relies on the fact that receptor molecules attract metals with complementary properties. The strength of the binding varies based on sterics and/or electronics. Certain extractants will bind to a specific metal atom strongly, whereas many other extractants show no such preference. The ORNL researchers explored ways to increase the selectivity of extractants for elements in the first column of the periodic table, which carry a positive charge and include cesium, potassium, sodium and lithium.

They started with simple extractants based on phenol, which is a hydroxyl group (OH) attached to an aromatic ring, and added a long hydrocarbon chain to improve their solubility in organic solvents. Then they mixed an anion receptor—calix[4]pyrrole (C4P), a cyclic molecule consisting of four linked pyrrole subunits (rings of four carbons and a nitrogen bearing a hydrogen)—with the phenol in the organic solutions. When bound to an extractant with a negative charge (in this case the long-chain phenol that has lost its positively charged hydrogen by reaction with hydroxide in the aqueous phase), C4P will change its shape. When C4P is unbound, two pyrroles opposite to each other point up and two point down. When C4P associates with anions, however, the pyrroles flip to all aim toward a central point, forming a “cup” that aligns “pi” electrons in the pyrrole subunits. A large positively charged metal is attracted to the center of the cup like a bee to the pollen-rich chalice of a flower. Whereas phenol on its own showed little selectivity toward singly charged metals (e.g., cesium), mixtures of phenol and C4P were significantly more selective.

Changing the nature of chemical interactionsOil and water are examples of mutually insoluble organic and aqueous solutions, respectively. After being shaken, much like oil-and-vinegar salad dressing, the phases separate back into two layers. During an extraction, the organic solution containing the phenol and C4P and the aqueous solutions containing dissolved salts are mixed well. As the phases separate back into two layers, some ions preferring the organic phase will be extracted while others remain in the aqueous phase. If phenol and C4P are mixed in the organic solvent and then mixed with an alkaline aqueous solution, the phenol’s –OH group loses its hydrogen to the aqueous phase by reaction with hydroxide ions. When this occurs, the phenol is converted to its anionic form, which attracts a cation into the organic phase to maintain charge neutrality.

“The nature of how C4P will bind to the cation changes greatly,” said Williams, who with Campbell Reynolds, a summer intern from the University of Tennessee–Knoxville, performed analytical radiochemistry experiments to assess the effectiveness of chemical separations. Lance Gill, a former ORNL employee, helped develop experimental protocols. ORNL’s Radu Custelcean used X-ray diffraction to solve the crystal structures of the complex. “By combining phenol and C4P, where we had no selectivity, we now have selectivity,” Williams said. “We’ve enhanced it or induced it.”

The extractant’s new-found selectivity for, in this case, cesium is due to several factors, one of which is atomic charge density. In small cations like lithium and sodium, charge is densely confined, giving the cation a “harder” nature. In larger cations, like potassium and cesium, charge is more spread out; the diffuse nature of the charge gives these metals a “softer” nature. Cesium is positively charged and the receptor/phenol complex is negatively charged, so they are opposites in one sense. But in terms of electronic nature, they’re alike, and similar charge densities want to come together.

“Cesium likes interacting with the pi bonds of pyrroles,” Williams said. “Pi bonds are similar to clouds or nebula where everything is spread out over a large area. In the pi bonds, the electron density of a molecule is spread out over the bonds or rings, giving them softer character similar to larger metal cations, so it is along the lines of like attracts like, where both the receptor and metal can interact with each other and spread the electron density out over an even greater area.”

The choice of solvent dramatically influences the effectiveness of the separation. Results from experiments that combined phenol with C4P in the organic solvent, and then mixed them with aqueous solutions containing both sodium and cesium, have shown marked enhancement in selectivity for cesium (40,000 times greater). These results hint at a basis for removing radioactive cesium from seawater at contaminated sites such as Fukushima. Williams and colleagues replaced phenol with organophosphate, an extractant that can lose its positively charged hydrogen at a pH close to that of seawater, and showed proof of the concept that organophosphate can work in place of phenols.

“Next we plan to run more experiments to determine which environment the cesium cation is in in organic solutions, whether it’s truly sitting in the cup like the solid-state crystal structure shows,” said Williams. He would like to venture beyond simple, singly-charged cations to explore whether the phenol/C4P complex could also extract mercury and other environmental toxins.

UT-Battelle manages ORNL for DOE’s Office of Science. The single largest supporter of basic research in the physical sciences in the United States, the Office of Science is working to address some of the most pressing challenges of our time. For more information, please visit http://science.energy.gov/.—by Dawn Levy