Objective comparison of catalyst performance may enable the development of systems for artificial photosynthesis. 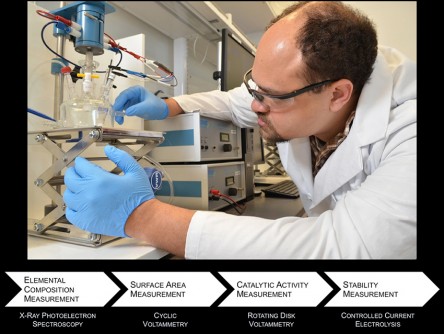 Dr. Charles McCrory is setting up a rotating disk electrode experiment, which is used to measure a material’s catalytic activity and stability under conditions that are required for a working water-splitting device. These measurements follow a separate procedure in which the sample’s surface composition is characterized by X-ray photoelectron spectroscopy.

Turning sunlight into storable fuels efficiently requires stable Earth-abundant catalysts that efficiently convert a maximum amount of the solar energy into fuel. Previous studies have described a range of catalysts, but a lack of standardized analytic conditions and methods has made objectively comparing catalysts challenging. Researchers standardized measurement techniques to allow a quantitative, objective evaluation of the activity and stability of water-splitting catalysts.

Researchers at the Joint Center for Artificial Photosynthesis (JCAP) have developed uniform benchmarking protocols and have used them to make “apples-to-apples” comparisons of the performance of more than forty catalysts for the evolution of hydrogen fuel and oxygen from water. Researchers evaluated the efficiency of each heterogeneous catalyst, measured as the amount of excess energy that would be required to create fuel in an artificial photosynthetic device operating about ten to a hundred times more efficiently than natural photosynthesis that occurs in crop plants. Researchers also determined the catalyst’s stability under laboratory testing conditions. While the study confirmed the efficiency of many known catalysts, few of the Earth-abundant catalysts for making hydrogen and oxygen from water proved sufficiently active and stable in the conditions that are required for a practical solar fuels generating system, highlighting a priority for future research.