Nitrogen oxide has nonlinear effects on the volatility and composition of SOA based on isoprene emitted by trees. 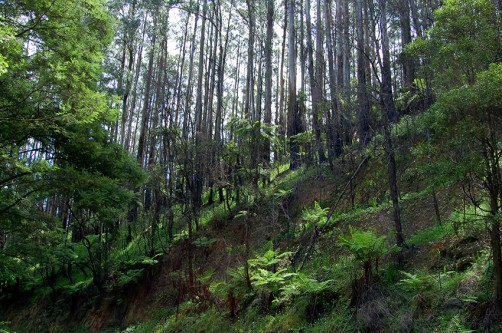 Researchers are seeking to understand the chemical processes leading to secondary organic aerosol formation from isoprene compounds emitted by many species of trees including eucalyptus (shown here).

Tiny aerosols greatly influence cloud formation and sunlight’s scattering or absorption. Yet, the factors that influence the formation of these aerosols, known as secondary organic aerosol or SOA, are often assumed. Researchers determined that previous assumptions about nitrogen oxide levels were overly simplistic; the amount of SOA produced from isoprene released by trees as well as the SOA volatility are more accurately tied to interactions with electron-rich, carbon-based chemicals, known as organic peroxy radicals, that compete with nitrogen oxides in reactions.

Results of this study indicate that nitrogen oxides cannot be assumed to have a linear effect on SOA formation. The complexities of the relationship need to be included in the next generation of models to accurately predict the dynamics of SOA formation and composition in different environments.

Isoprene, an organic compound produced and emitted into the atmosphere by many tree species, plays an important role in tropospheric ozone chemistry and in formation of SOA particles. The particles can affect Earth's radiation balance directly through scattering or absorption of sunlight and indirectly through forming cloud condensation nuclei. Accurately simulating the impacts of SOA on climate requires understanding the chemical processes that lead to SOA formation in the atmosphere under a wide variety of environmental conditions. Previous laboratory studies have demonstrated different SOA oxidation yields and properties at "low" (near zero) and "high" levels of nitrogen oxides (NOx). Current models use a linear combination of these extreme conditions to predict altered SOA formation in the presence of anthropogenic emissions. Unfortunately, data from recent laboratory and field studies have not been consistent with this simple model. To help address this challenge, a team of U.S. Department of Energy researchers conducted laboratory experiments in an environmental chamber to investigate the effects of NOx on the volatility and chemical composition of SOA generated by isoprene photooxidation. Volatility is a key property of organic aerosol because it determines the partitioning between the gas and particle phases, and thus the formation of SOA particles. Researchers found that the volatility and oxidation state of isoprene SOA are sensitive to, and exhibit a nonlinear dependence on, NOx levels. The dependence likely arises from gas-phase chemistry of organic peroxy radicals, which compete with NOx in reactions, and succeeding particle-phase reactions. This observation helps reconcile the seemingly contradictory observations of the NOx effect on isoprene SOA volatility reported in previous literature studies.