A fast new approach to complex theoretical analysis of the bulk properties of atomic nuclei brings analysis to personal computers. 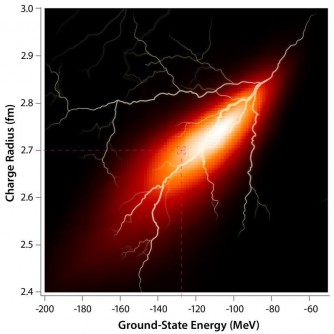 Plot of 100,000 predictions of the radius & energy of the atomic nucleus of oxygen-16 for different models of the interaction inside the nucleus. The new method generated the results on a laptop in just a few minutes. Dashed lines show experimental data.

Newswise — Nuclear physicists have developed a new method for quickly emulating the properties of atomic nuclei. Nuclei are quantum objects, meaning that their properties are complex and cannot be explained by classical physics. The new method helps scientists understand those quantum properties. The emulator starts with a training stage that uses a small set of exact calculations from the SUMMIT supercomputer. The emulator then generates 1 million predictions for the ground-state energy and charge radius of nuclei of oxygen-16, an isotope of oxygen. The process takes less than one hour on a standard personal computer. The scientists tested different parameters for the forces between protons and neutrons for each prediction. This helped them shed new light on the strong nuclear interaction inside the nucleus.

Researchers have long sought to uncover the properties of the interaction that binds protons and neutrons to atomic nuclei. But analyzing millions of exact samples of a complex nucleus would take the SUMMIT supercomputer more than a year. This new method makes it possible to employ statistical methods to analyze the link between predictions of observable properties and the underlying strong nuclear interaction. This method instead uses a small number of exact high-performance computations. This dramatically reduces the computational complexity of the many-nucleon problem. This is a fundamental question in physics. And it allows a standard personal computer to accurately emulate these problems.

A new method, named Subspace-Projected Coupled-Cluster, accurately emulates first-principles computations of atomic nuclei. Based on a smaller number of results from leadership class computing facilities, the emulator allows scientists to sample the full parameter space of a systematically improvable nuclear interaction model to the strong nuclear force where pions are the force carriers. In a first pioneering application, researchers used the method to carry out a global sensitivity analysis of the mass and radius of oxygen-16. This kind of sensitivity analysis is a state-of-the-art method for quantifying how much each parameter in a complex model of the nuclear interaction contributes to the uncertainty in the theoretical prediction of these bulk nuclear properties. The results elucidate the complicated nature of describing the size of atomic nuclei and provide new insights into how protons and neutrons interact with each other to bind atomic nuclei. This method opens entirely new possibilities to systematically quantify uncertainties in first principles computations of atomic nuclei.

This work was supported by the European Research Council under the European Union Horizon 2020 research and innovation program and the Department of Energy (DOE) Office of Science, Office of Nuclear Physics. Computer time was provided by DOE’s Innovative and Novel Computational Impact on Theory and Experiment program. This research used resources of the Oak Ridge Leadership Computing Facility, a DOE Office of Science user facility at DOE’s Oak Ridge National Laboratory.