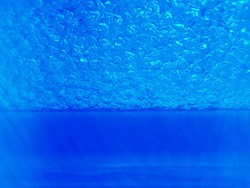 Nanoparticle additives to lubricants commonly combined with refrigerants used in chillers may encourage secondary nucleation--bubbles on top of bubbles. The double-bubble effect enhances boiling heat transfer and, ultimately, could help to boost the energy efficiency of industrial-sized cooling systems.

Newswise — Adding just the right dash of nanoparticles to standard mixes of lubricants and refrigerants could yield the equivalent of an energy-saving chill pill for factories, hospitals, ships, and others with large cooling systems, suggest the latest results from National Institute of Standards and Technology (NIST) research that is pursuing promising formulations.

NIST experiments with varying concentrations of nanoparticle additives indicate a major opportunity to improve the energy efficiency of large industrial, commercial, and institutional cooling systems known as chillers. These systems account for about 13 percent of the power consumed by the nation's buildings, and about 9 percent of the overall demand for electric power, according to the Department of Energy.

NIST researcher Mark Kedzierski has found that dispersing "sufficient" amounts of copper oxide particles (30 nanometers in diameter) in a common polyester lubricant and combining it with an equally pedestrian refrigerant (R134a) improves heat transfer by between 50 percent and 275 percent. "We were astounded," he says.

Results of this work have been presented at recent conferences and will be reported in an upcoming issue of the ASME Journal of Heat Transfer.

Just how nanomaterial additives to lubricants improve the dynamics of heat transfer in refrigerant/lubricant mixtures is not thoroughly understood. The NIST research effort aims to fill gaps in knowledge that impede efforts to determine and, ultimately, predict optimal combinations of the three types of substances.

"As with all good things, the process is far from foolproof," Kedzierski explains. "In fact, an insufficient amount or the wrong type of particles might lead to degradation in performance."

On the basis of work so far, the researcher speculates several factors likely account for nanoparticle-enabled improvements in heat-transfer performance. For one, nanoparticles of materials with high thermal conductivity improve heat transfer rates for the system. Preliminary results of the NIST research also indicate that, in sufficient concentrations, nanomaterials enhance heat transfer by encouraging more vigorous boiling of the mixture. The tiny particles stimulate, in effect, double bubbles—secondary bubbles that form atop bubbles initiated at the boiling site. Bubbles carry heat away from the surface, and the fact that they're being formed more efficiently because of the nanoparticles means the heat gets transferred more readily.

Other interactions, Kedzierski says, also are likely to contribute to the dramatic performance improvements reported at NIST and elsewhere.

Success in optimizing recipes of refrigerants, lubricants and nanoparticle additives would pay immediate and long-term dividends. If they did not harm other aspects of equipment performance, high-performance mixtures could be swapped into existing chillers, resulting in immediate energy savings. And, because of improved energy efficiency, next-generation equipment would be smaller, requiring fewer raw materials in their manufacture.