How we conduct plutonium experiments to enhance nuclear safety 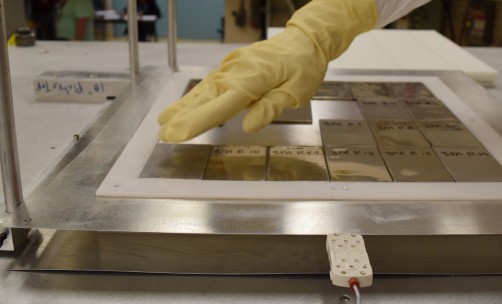 Plutonium plates are hand-stacked onto an aluminum tray during the first LLNL-designed criticality experiment in 40 years. The “vintage plutonium” plates were produced in the 1960s, steel plated to prevent oxidation and used through the ‘80s to mock up nuclear reactor cores.

Newswise — LIVERMORE, California – Gathered in a control room deep in the Nevada desert, a team of researchers from Lawrence Livermore and Los Alamos national laboratories watched safety monitors as a carefully layered stack of plutonium inched toward “critical” – the point at which fissile material can sustain a nuclear chain reaction. It took five years of planning, calculations and preparatory experiments, but they had successfully conducted the first LLNL-designed critical experiment in 40 years.

The experiment was one in a series that aims to help ensure plutonium operations – which are important to LLNL’s mission of assessing the safety, security and effectiveness of the U.S. nuclear stockpile without testing – continue to be conducted safely. There have been tens of thousands of critical configurations measured over the last 70 years, but only a small subset are considered “benchmark quality” (data that codes can be judged against) by the nuclear criticality safety community. The more exact the data that underpins the safety codes, the more confidence researchers have in their codes predicting when an assembly will go critical.

“The whole goal of this is to improve safety,” said Catherine Percher, a nuclear engineer at LLNL leading the experimental series. “As computational power has increased, the criticality safety community has become more reliant on radiation transport codes to set safety limits for our operations. Underpinning these codes is nuclear data, which predicts how likely the nuclear reactions are to occur in any material. In some cases, there are gaps in our benchmark data for some materials and energy ranges. For instance, we have very few critical experiments that include tantalum as a ‘diluent material.’ Therefore, if we want to do a nuclear operation with tantalum, we don’t have benchmark experiments with which to validate our computer models, so we have to build in bigger margins to make sure we don’t get close to the critical point. Those margins increase costs and could cause an operation to be scuttled.”

When plutonium atoms fission (split apart), free neutrons are emitted. If enough plutonium is packed together – a “critical mass” – these neutrons can initiate a nuclear chain reaction. Percher describes these neutrons as “born fast” out of fission, meaning they have a high kinetic energy when initially emitted. But when they radiate out and interact with other materials, they collide with other atoms and slow down.

Neutrons have the potential to cause fission at any energy, but the probability varies significantly based on how much energy the neutron still has. Fast neutrons (relevant to weapons) and slow neutrons (relevant to reactors) are well studied and understood. On the other hand, significant uncertainty exists through the intermediate energy range, which is characterized by what Percher refers to as “resonances.” The probability that a neutron will cause fission jumps up and down significantly and sporadically through that region. Creating experiments where lots of fissions happen in this region is of particular interest to Percher and her team.

“We have a benchmark book with about 5000 experiments to validate our codes,” Percher said. “Only 2 percent of those experiments are in the intermediate energy region. We’re trying to address real needs in the criticality safety program.”

To fill these gaps, the research team is creating five high-precision plutonium critical assemblies that span a wide range of fission energy spectra by varying the amount of polyethylene between each plutonium layer. These assemblies are also designed to be a test bed for other non-plutonium materials that could dilute what might othersise be a critical mass of plutonium. Tantalum, for instance, has been identified by the international criticality safety and nuclear data communities as needing benchmark data. To explore this diluent material, tantalum plates will be inserted between the plutonium and polyethylene layers in the stacks in each of the five configurations to determine its effect on criticality.

The team began by assembling an amount of plutonium that they were certain would be subcritical. Plutonium plates were stacked side-by-side on aluminum trays, designed to disperse heat – plutonium is naturally warm to the touch due to radioactive decay.  Polyethylene sheets were inserted between plutonium layers, which were designed to interact with neutrons as they are emitted, essentially slowing them down and tuning them to a desired energy level. The team started with one layer of plutonium and took a neutron count rate. They then added additional plutonium layers, taking a neutron count rate each time, until the neutron population in the assembly reached a level that required remote assembly.

At that point, the researchers moved the plutonium and polyethylene stack to a specialized experimental apparatus called the Planet vertical lift machine. The vertical lift machine separates the experimental stack into two subcritial stacks, with a stationary platform one on the top and a machine-movable platform on the bottom. The team returned to the control room, slowly raised the bottom half of the stack to contact the top and took a neutron count. They then lowered the bottom platform, added another layer of plutonium to the assembly and took another measurement. With these data points, they could then extrapolate how many plutonium layers would be required for the assembly to go critical. With each tray that was added to the assembly, the team took measurements, plotted the data and analyzed the plot to determine if they were still on track with their predictions. All told, it took five trays to achieve what Percher described as a near-perfect benchmark.

“We were right at critical, and we kept it together for an hour,” Percher said. “It was amazing to see the constant, slow increase in the neutron population. If we had too much mass, we would have to correct for that in our models. But we achieved a near-perfect benchmark.”

This benchmark was achieved June 27 with operations support from Los Alamos National Laboratory collaborators and funding from the National Nuclear Security Administration’s Nuclear Criticality Safety Program. The team took a second assembly critical two days later, and the experimental plan has the team scheduled to take a total of ten configurations critical by the end of March 2018. Once complete, the team plans to publish the nuclear data they gather in open literature.