Crystals Grow by Twisting, Aligning and Snapping Together

The force that enables nanosize crystals to grow could be used to design new materials. 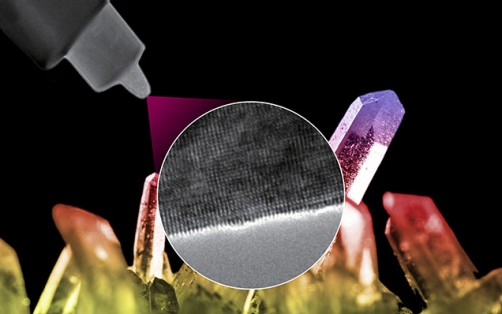 When matching sides are aligned, smaller crystals can fuse seamlessly (snap together), growing larger and larger.

Newswise — Tiny particles suspended in a liquid often combine to form larger crystals. However, the forces governing this behavior remain unclear. For the first time, scientists measured and modeled the force, called the van der Waals force, that causes two nanosize crystals to twist, align, slam into each other, and snap together.

From rocks to shells to bones, crystal growth occurs in a wide range of cases in nature. Crystal growth from a liquid medium may follow a range of processes. One process is the assembly of small crystals in a self-regulated fashion. The discovery of the interaction between the orientation of the crystals and the force between the two approaching crystals provides insights into crystal self-assembly. This understanding could be harnessed to create new materials for energy storage, production and use.

Scientists who study crystal formation and growth have long known that nanosize crystals suspended in a liquid medium often aggregate to form large crystals. However, such aggregation is not a simple piling up of each nanosize crystal. Instead, when two nanosize crystals approach, they mutually rotate, align and snap together. To better understand the nanosize crystals’ behavior, a team of researchers from Pacific Northwest National Laboratory; the University of Pittsburgh; and EMSL, the Environmental Molecular Sciences Laboratory, developed a new approach. They combined an environmental transmission electron microscope at EMSL, a Department of Energy Office of Science user facility, with nanocrystal force probes, which allowed the team to watch crystals interact in a life-like situation while simultaneously measuring the interaction force (torque) between two nanosize crystals. The team also used a focused ion beam in a scanning electron microscope at EMSL to fabricate the nanosize crystal with a designated crystal surface, and they measured the attracting force between the two nanosize crystals under moist conditions and at different relative orientations. The team discovered that the attraction force, or van der Waals force, between the two crystals depended on molecular coverage of water on the crystal surface as well as the relative orientation of the crystal. The in situ measurement indicates the maximum amount of force at perfect alignment of two crystals, while force is minimal at the largest disorientation. Due to force dependence on the orientation, approaching nanocrystals strive to match orientation.

This work was supported by the U.S. Department of Energy (DOE), Office of Science, Office of Basic Energy Sciences; the Laboratory Directed Research and Development program at Pacific Northwest National Laboratory; the National Science Foundation through the University of Pittsburgh; and the Environmental Molecular Sciences Laboratory, a DOE Office of Science user facility.