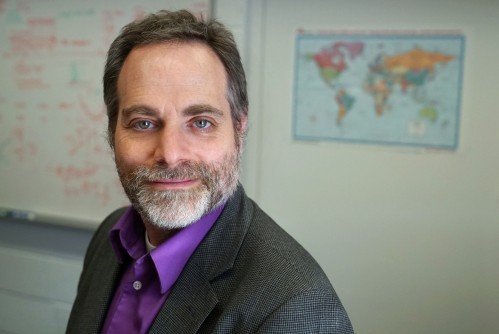 Particle physicist David Asner will help expand Brookhaven Lab's physics portfolio, with a focus on technology transfer opportunities, and lead a group of staff members who are developing state-of-the-art instrumentation for experimental research.

Newswise — UPTON, NY—David Asner, a particle physicist with extensive leadership and management experience, has been appointed Deputy Associate Laboratory Director for Strategic Program Development and Head of the Instrumentation Division within the Nuclear and Particle Physics Directorate at the U.S. Department of Energy’s (DOE) Brookhaven National Laboratory, effective January 2, 2018. The Deputy position is an entirely new role focused on growing Brookhaven’s nuclear and particle physics program in directions outside its traditional areas, particularly in technology applications for national security, space science, and materials science. As Instrumentation Division Head, Asner succeeds Graham Smith, who will resume his leadership of the division’s neutron detection program.

Asner joins Brookhaven Lab from DOE’s Pacific Northwest National Laboratory (PNNL), where he built and led a high-energy physics program. He oversaw a broad research and development program consisting of fundamental and applied research projects that led to new capabilities in areas including radiation and radionuclide detection, mass spectrometry, environmental assessment, realistic computer modeling, and proliferation detection and prevention. During his seven years at PNNL, he served in a variety of leadership roles: Chief Scientist for the DOE U.S. Belle II detector construction project, Laboratory Fellow, Manager of the Radiation Detection and Nuclear Sciences Group, and most recently, Chief Scientist for Particle Physics.

“Brookhaven has demonstrated international leadership in physics and instrumentation for decades,” said Asner. “I look forward to leading a strong team of physicists, engineers, and technical professionals to develop and execute a bold plan that enables discovery physics and provides a technology platform that serves the science and security needs of New York State and the nation.”

Prior to PNNL, the majority of Asner’s research was centered at Cornell University. Asner was deeply involved with the CLEO high-energy physics collaboration at Cornell throughout and following his graduate career, most notably serving as the collaboration spokesperson from 2008 to 2010. Asner joined the faculty of Carleton University in 2005 and was promoted to Associate Professor of Physics with tenure in 2010. While at Carleton, he spent time in industry as a physicist at Lockheed Martin Systems Integration. Asner entered academia in 2003 as a research assistant professor at the University of Pittsburgh after beginning his career as a physicist at DOE’s Lawrence Livermore National Laboratory.

Asner’s research in nuclear and particle physics has focused on the search for new particles, interactions, and phenomena by understanding the most basic parts of the universe. His most recent research has been aimed at the direct detection of dark matter (a type of matter that scientists believe makes up almost one quarter of the universe) and the use of rare decays of elementary particles called quarks as probes of new physics beyond the Standard Model. Throughout his career, he has designed, built, executed, and analyzed data from particle physics experiments across three continents.

“David has extensive experience both in high-energy physics—he led the U.S. participation in the Belle detector in Japan—and in the transfer of high-energy physics technology to other areas, especially national security, from his former position at PNNL,” said Berndt Mueller, Brookhaven’s Associate Laboratory Director of Nuclear and Particle Physics. “He also has considerable experience as a line manager. Given these qualifications, he was an ideal fit for the position, which requires extending the business model for the Instrumentation Division.”

In his new roles, Asner will create an efficient system for developing state-of-the-art instrumentation—including application-specific integrated circuits and microelectronics, semiconductor detectors, gas and noble liquid detectors, lasers and optics, and micro- and nanofabrication instruments—and solving instrumentation problems faced by Brookhaven’s scientific community. He will also work with Mueller and other leaders at Brookhaven to identify new opportunities for technology transfer and commercialization within the existing physics portfolio and to initiate programs outside the traditional focus areas.

Asner received his BSc in physics from the University of Waterloo in 1991, his MS in physics at the University of California–San Diego in 1994, and his PhD in physics at the University of California–Santa Barbara in 2000. During his 25 years in the particle physics field, he has authored or co-authored more than 500 publications in peer-reviewed journals, has presented more than 100 talks about his research at universities and conferences, and has served on numerous executive boards and committees for physics collaborations. In 2014, he was elected as a Fellow of the American Physical Society.