Team’s approach enables a highly sensitive search for a neutron electric dipole moment, which provides insights into the nature of the universe. 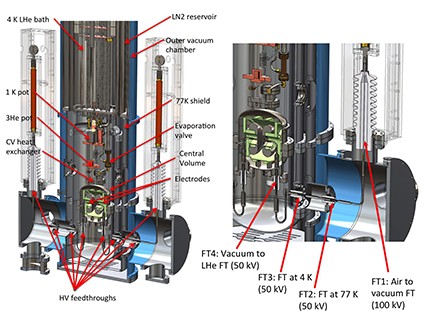 The Medium Scale High Voltage Test apparatus in TA-53 Building 10 allowed scientists to test electric fields in liquid helium, a crucial part of upcoming experiments into the nature of matter and antimatter.

Why is so much more matter than antimatter present in the universe? A clue to this mystery may be provided by a sensitive search for a separation of positive and negative charges inside the neutron, which is referred to as the neutron’s “electric dipole moment” (EDM). The detection of a nonzero EDM in a particle such as the neutron would imply an asymmetry between matter and antimatter, which may explain the imbalance in the amounts of matter and antimatter now observed in the universe. Scientists have been searching for evidence of a neutron EDM for approximately 60 years, and thus far have only provided upper limits. One limiting factor of an experimental search for a neutron EDM is the strength of the electric field that can be applied to a sample of neutrons, because the observable effects of an EDM depend strongly on the strength of the applied electric field. A team of nuclear physicists and engineers demonstrated that it is indeed possible to use liquid helium to apply an electric field several times larger than that used in previous neutron EDM experiments.

A multi-institutional team has been developing an experiment to search for a neutron EDM. The experiment will take place at the Spallation Neutron Source (SNS) at Oak Ridge National Laboratory. The experiment will employ the team’s novel technique using liquid helium. One expected benefit of this approach follows from liquid helium’s ability to withstand a higher electric field than a vacuum. A demonstration that a specific large electric field can be maintained in liquid helium implicitly determines the sensitivity to a neutron EDM that can be achieved in this type of experiment.

As part of the research and development effort for the neutron EDM experiment, which is led by Oak Ridge National Laboratory, a multi-institutional team at Los Alamos National Laboratory constructed an apparatus to study electrical breakdown in liquid helium. This apparatus can house electrodes that are 1/5 of the scale of the electrodes planned for the neutron EDM experiment that will be located at the SNS, and can also be used to study various electrode materials. The initial results, obtained using this 1/5-scale apparatus with liquid helium at a temperature of 0.4 K, demonstrate that it is indeed possible to apply an electric field several times larger than that used in previous neutron EDM experiments.

This effort was funded by the DOE, Office of Science, Office of Nuclear Physics and the National Science Foundation.