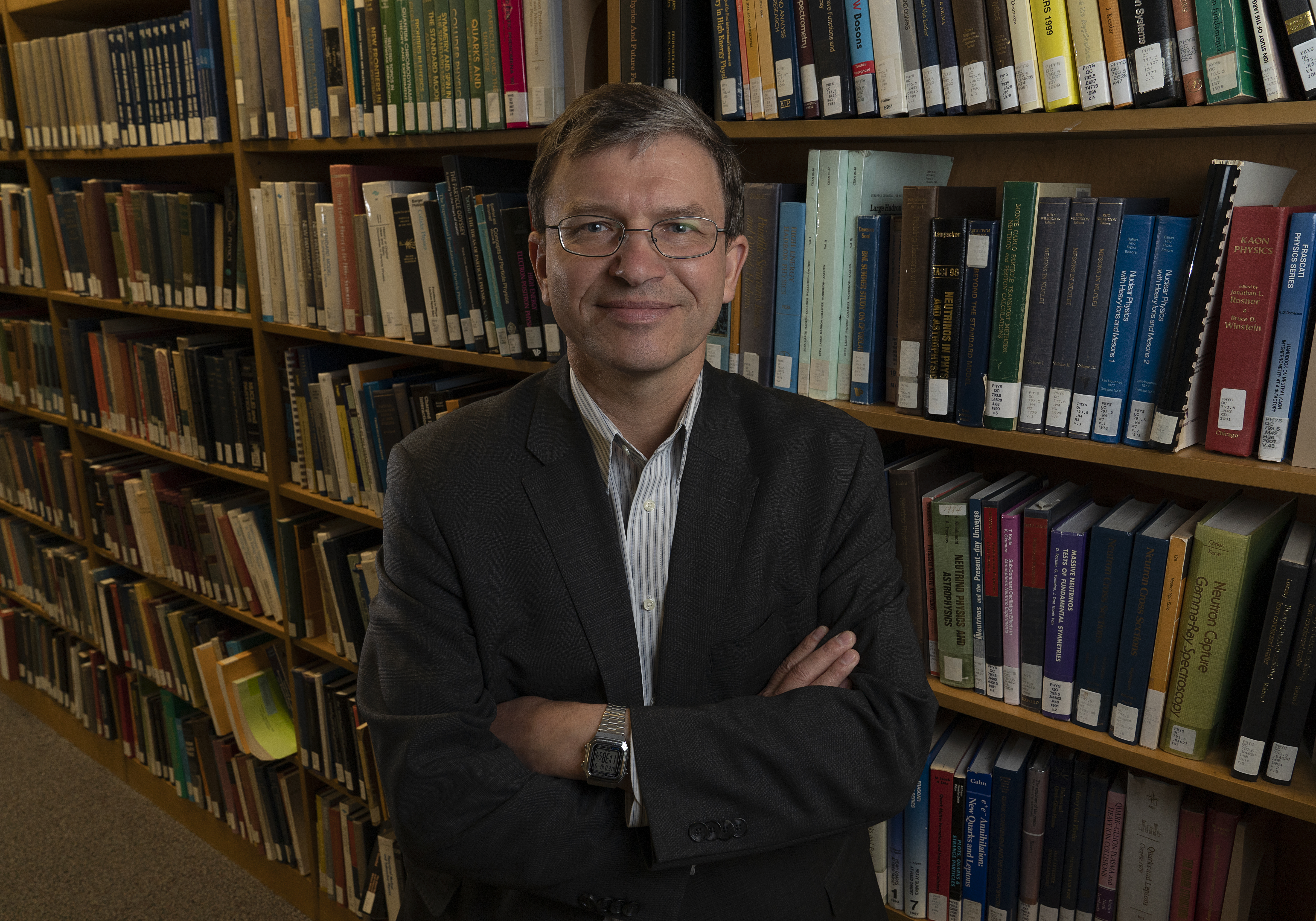 Newswise — Dmitri Denisov, a leading physicist and spokesperson of the DZero experiment, has been named Deputy Associate Lab Director for High Energy Physics at the U.S. Department of Energy’s (DOE) Brookhaven National Laboratory. In this role, Denisov is responsible for Brookhaven’s strategic planning in high energy physics and oversees a wide range of particle physics projects at the Lab that explore the universe at its smallest and largest scales.

“Particle physics studies the laws of nature at the smallest distances and tells us that the majority of the world we see is made of only a handful of elementary particles,” Denisov said. “Studying these particles and their interactions, and looking for the next, ever more precise step in our understanding of the subatomic world, is deeply exciting and rewarding.”

Since joining Brookhaven, Denisov’s first initiative was to refine the Lab’s long-term strategy for high energy physics research. In a field of science where experiments often run for decades, and a single discovery can rewrite an entire science program, it is challenging to plan ahead.

“I’ve envisioned a strategy for the future in which we develop transformative science and technology, are in close cooperation with other U.S. labs and the international particle physics community, and balance that all with available funding,” Denisov said. “We’re going wherever the best science is and wherever we can contribute in the most valuable way.”

To date, many of Brookhaven’s high energy physics projects are collaborative efforts with other DOE labs and world-renowned institutions. For example, Brookhaven Lab serves as the U.S. host laboratory for the ATLAS experiment at CERN’s Large Hadron Collider (LHC), the world’s highest energy particle accelerator. The Lab participates in many areas of the ATLAS experiment, such as construction, project management, data storage and distribution, and experiment operations. Most recently, Brookhaven led the U.S. part of a major upgrade to the ATLAS detector in preparation of the LHC’s high luminosity upgrade.

“We plan to participate strongly in the ATLAS experiment and continue to lead the U.S. contributions,” Denisov said. “I’m looking forward to more discoveries from ATLAS, following the discovery of the Higgs boson using data from the ATLAS and CMS experiments.”

Denisov says Brookhaven will also play an important role in the upcoming Deep Underground Neutrino Experiment (DUNE) based at DOE’s Fermi National Accelerator Laboratory (Fermilab) and the Sanford Underground Research Facility, from design and construction to operations and analyses. DUNE scientists will search for new subatomic phenomena that could transform our understanding of neutrinos, “and potentially explain the abundance of matter over antimatter in the universe,” said Denisov.

Other international experiments that the Lab’s high energy physics program will continue to actively participate in include the Belle II experiment at Japan’s SuperKEKB particle collider, for which Brookhaven performs a majority of the computing tasks, and the Large Synoptic Survey Telescope (LSST). For many years, Brookhaven has been developing LSST’s 3.2 gigapixel sensor array, the largest charge-coupled device (CCD) array that has ever been built. Once the telescope begins operations, Brookhaven will take on a new role involving experiment operations, scientific analysis and potentially computing.

Meanwhile, back at Brookhaven, scientists in the high energy physics program are pioneering new detector technologies, software, and computing solutions that could be used for future experiments. Denisov is also working closely with other directorates at Brookhaven to see if there are more opportunities for collaboration, which would benefit the Lab as a whole.

“Particle physics experiments require large and complex facilities,” Denisov said. “Brookhaven’s Superconducting Magnet Division, Accelerator Test Facility, Computational Science Initiative, and Instrumentation Division are among the best in the world, and they are playing key roles in the particle physics strategy at Brookhaven. Brookhaven’s theory group is also widely appreciated in the world, and we will continue our strong cooperation to advance our understanding of the world of elementary particles.”

Before coming to Brookhaven Lab, Denisov spent 25 years at Fermilab. He’s best known for serving as the spokesperson for the DZero experiment, which used Fermilab’s Tevatron collider to study the interactions of protons and antiprotons. The DZero collaboration, together with CDF collaboration, is credited with discovering and studying the top quark, the heaviest elementary particle known, and was awarded the European Physical Society prize earlier this year. Strong contributions from Brookhaven’s DZero group were critical for the success of the experiment.

“I grew from a grad student on the DZero experiment to its spokesperson,” Denisov said. “From designing and building detectors to developing triggers and software and performing physics analyses, it was exciting to be involved in every aspect of one of the most influential high energy physics experiments.”

Now, Denisov is looking forward to transitioning to a role where he is involved in many areas of an institution’s physics research, not just a single project.

“It attracted me to be able to look at the big picture in physics, and Brookhaven is the perfect place to do that,” he said. “It excited me when I learned about the opportunity and I’ve been excited ever since.”

Berndt Mueller, Associate Lab Director for Nuclear and Particle Physics, added, “We are extremely fortunate to have been able to recruit Dmitri to lead our high energy physics program. Dmitri has already given our world-renowned program a new sense of direction and is now leading our preparations for the next nation-wide strategic planning exercise that will result in a new strategic plan for particle physics in the U.S. in 2022.”