Discovering the Ultimate Limit of Heat Transport: Measurements across a Single-Atom Junction 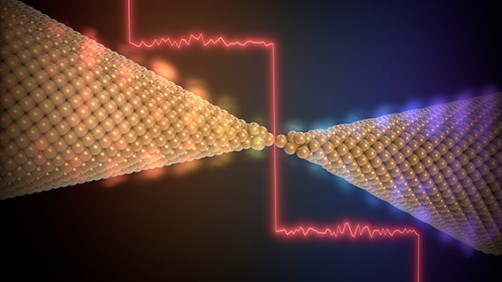 As gold is stretched into a strand one atom thick (center of artist’s sketch), an expressway for heat transport is formed. Designated as a “quantum of thermal conductance,” this phenomena was observed for the first time and represents the largest possible heat flow through a channel in a material (as illustrated by the red conductance trace through the junction).

When electricity flows through circuits, heat is invariably generated and leads to detrimental increases in temperature. The ability to move heat away from circuits is one of the major challenges of modern electronics, especially as circuitry gets smaller and smaller. By developing a novel instrument, scientists can now measure heat flow in a chain of atoms, essentially measuring, for the first time, heat moving between atoms at room temperature. These experiments confirm that current theories relating how heat and electricity move hold even at the atomic scale.

Heat transport at the atomic scale has remained experimentally inaccessible, until now. The novel tools developed in this work pave the way for ground-breaking studies of heat transport. The tool measures how heat flows in atomic chains, single-molecule junctions and one-dimensional polymers and provides insights vital for new technologies. Heat transport in all of these materials are expected to be of great value for novel batteries and other energy conversion devices.

Scientists at the University of Michigan overcame several long-standing technical challenges by developing custom-nanofabricated calorimeters (an instrument for measuring heat flow) capable of measuring extremely small heat currents (as small as a few picowatts — one-millionth of one-millionth of a watt) and directly measuring the thermal conductance of gold and platinum metallic wires that are “stretched” to have sections, or junctions, that are as thin as a single atom. This work reveals that the heat flow rate in single-atom metallic junctions has an upper limit that is set by the laws of quantum mechanics. Specifically, the thermal conductance of gold single atom junctions is found to be quantized at room temperature and is ~560 pW/K. Further, this work shows that the law in physics, known as the Wiedemann-Franz law, relating the thermal and electrical conductance is satisfied even in single-atom contacts. Further, the experimental results are in quantitative agreement with state-of-the-art quantum thermal transport calculations thus providing experimental support for current models of quantum thermal transport. The insights obtained from this work are expected to influence the design of nanoscale electronic and optical devices, which have greatly improved thermal management. Further, the experimental techniques will enable probing of the nano- and molecular-scale mechanisms that are critical for creation of novel nanostructured energy conversion devices.

The U.S. Department of Energy, Office of Science, Basic Energy Sciences (development of scanning probe calorimeter and using them for elucidating quantum thermal transport), Office of Naval Research (development of low-noise instrumentation), and the National Science Foundation (microfabrication) supported this study. Computational analysis was supported by the Spanish Ministry of Economy and Competitiveness, the Carl Zeiss Foundation, and the German Research Foundation.