Lead and bismuth systems are being produced to fill the nation’s need for short-lived, alpha-emitting isotopes. 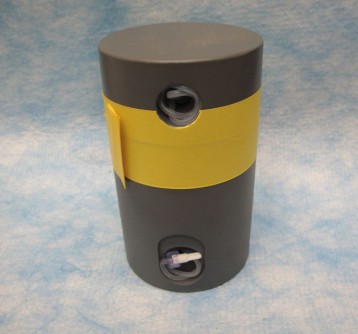 Radium-224/lead-212 generator with the shield cap removed to show the tubing connections to the column.

Newswise — The Office of Nuclear Physics funds a community of scientists to do basic nuclear physics research that seeks to uncover the fundamental nature of matter. As a consequence of this basic research, many ideas and instruments (funded through various sources) have found their way into many different areas in public life as well as in other government programs. This highlight is an example of such a "spinoff".

Two radioisotopes, lead-212 and bismuth-212, are of interest in targeted cancer therapies, but the short-lived radioisotopes were becoming hard to acquire until the DOE Isotope Program recently began producing the appropriate generators. These generators are being produced at Oak Ridge National Laboratory (ORNL) and are now available through the National Isotope Development Center catalog.

Research is demonstrating the effectiveness of lead and bismuth isotopes in destroying cancer cells while limiting damage to healthy cells. In response to the discontinuation of availability of these generators from a private initiative that had attempted to commercialize generator production, the DOE Isotope Program initiated the establishment of a production capability at ORNL. The generators provide lead-212 and bismuth-212 in support of research that could lead to more effective, less debilitating cancer therapies.

The DOE Isotope Program, managed by the Office of Nuclear Physics, is making radium-224/lead-212 generators through the recovery of thorium-228 from uranium-232. The thorium-228 (1.9 year half-life) serves as a cow for radium-224 (3.7 day half-life), which is loaded on a generator from which either lead-212 or bismuth-212 can be eluted. The radium-224 generator, using the same design as the ORNL actinium-225/bismuth-213 generator, has been found to perform exceptionally well. The generator is now routinely available through the National Isotope Development Center catalog. Generators are shipped with instructions for eluting lead-212 and bismuth-212.

Increasing the availability of alpha-emitters for medical research was the highest priority recommendation of the Nuclear Science Advisory Committee’s report “Compelling Research Opportunities using Isotopes (19.9MB)”. In addition to the routine provision of actinium-225, thorium-227, and radium-223; investing in research on accelerator production of actinium-225; and supporting development of production of astatine-211 at several universities; the production of radium-224/lead-212 generators now provides a pathway for researchers’ utilization of all the most-promising alpha-emitters for therapy of cancer and other diseases.