Don’t Touch: How Scientists Study the Reactions Inside Stars 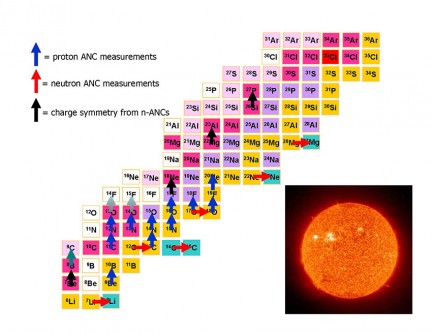 Left: Chart of nuclides and important astrophysical reactions. Right: SOHO-EIT image from 14 September 1997 showing a huge eruptive prominence in the resonance line of singly ionized helium (He II) at 304 Angstroms in the extreme ultraviolet. The material in the eruptive prominence is at temperatures of 60,000 - 80,000 K, much cooler than the surrounding corona, which is typically at temperatures above 1 million K.

Newswise — How old is the universe? What causes a star to catastrophically explode? Answering these and other questions about stellar evolutions requires knowing the rates of the reactions involved. Specifically, scientists need to understand low-energy nuclear reactions that involve stable and unstable nuclei, the positively charged core of atoms. With few exceptions, laboratory measurements are limited to stable isotopes and high energy levels and thus must be extrapolated to lower energies. Nuclear scientists at Texas A&M University devised a method, using the asymptotic normalization coefficients (ANC), that allows scientists to determine key reaction rates at stellar energies using conventional nuclear reactions.

The measurement of the ANC for the capture of a proton by a specific atom, 14N, caused nuclear scientists to reconsider the age of the universe, which had been based on earlier work. This result is just one of many important rates that have been measured by this technique.

Measurements of ANCs over the past decade have provided new information about rates of many stellar reactions that involve capturing a proton by light-mass nuclei. Such reactions are important in supernovae and other stellar burning and stellar evolution phenomena. The ANC method involves both stable and unstable nuclei. Results from the ANC research have been published in more than 70 papers in the leading peer reviewed journals. A summary of the work has been published as a review article in Reports on Progress in Physics.