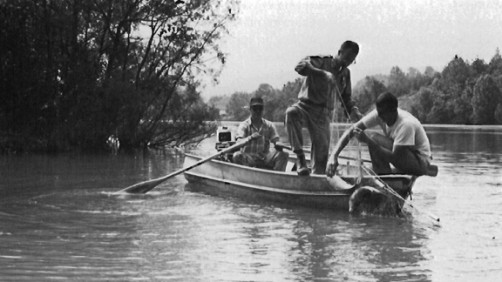 Ecologist Dan Nelson hauling in a gill net as part of the fish population survey of the Clinch River Study.

Newswise — The study of ecology is likely to evoke images of recycling signs or the “blue marble” Earth from space associated with the environmental movement of the 1960s. But in reality, ecology as a field largely developed to meet the need to monitor radioactive contamination in the Atomic Age.

In the wake of World War II, the U.S. federal government had a major knowledge gap. It needed to know more about the consequences of nuclear weapons use and production, from the effects of fallout to waste disposal.

The Atomic Energy Commission’s (AEC) national laboratories were logical places to answer these questions. As the home of the Manhattan Project, these labs had the resources to figure out how nuclear contaminants can move through plants, animals, and natural systems as well as how radiation affects cellular behavior within these systems.

But these scientists went far beyond what they called “radioecology.” They tackled broader questions about the building blocks of natural systems. Researchers at the places that became the Department of Energy’s (DOE) Savannah River Ecology Laboratory, Oak Ridge National Laboratory (ORNL), and the Pacific Northwest National Laboratory (PNNL) first developed many of the concepts and tools ecologists still use today.

Of course, the less fortunate side of this story is that many of the discoveries were a byproduct of radioactive contamination of the environment.  One of the tragedies of the Atomic Age is that in the early years, scientists poorly understood and for the most part, grossly underestimated the effects of radioactivity on both humans and the environment. One unfortunate result was a great deal of damage to the environment around Atomic Energy Commission sites.

But it was also partly the work of AEC-supported scientists in radioecology that increased awareness of radiation’s effects and hazards. This research helped lead to new, more environmentally conscious standards and practices for handling radioactive materials.  This work also helped lead to a better understanding of certain beneficial uses of radiation, such as radioactive tracers in medicine and a variety other fields.

The Ecosystem as a Concept at Savannah River and Beyond

In 1954, the AEC wanted to know how nuclear weapons testing in the Pacific Ocean affected organisms in coral reefs. Ecologist Eugene Odum wanted to study the relationships between those same creatures. It was a perfect match.

At Eniwetok Atoll, in the middle of the Pacific Ocean, he measured both the effects of fallout as well as how nutrients differed coming in and going out of the reef. By mapping how energy moved through the system, he discovered the symbiotic relationship between coral and algae. It was one of the first discoveries of mutualism, where organisms rely on each other to carry out essential biological processes.

Back in the United States, Odum found support for his work through the AEC’s Savanna River Laboratory (SNL) in South Carolina. Because SNL didn’t launch until 1951, it didn’t face the same pressure as the Manhattan Project labs. They had time to assess the lab’s campus environment before work started.

Like in the Pacific, Odum found a way to meet both the lab’s and his own research needs. Because SNL took its land over from local farmers, its campus offered the perfect opportunity to study “old field succession.” This term refers to the stages landscapes go through as fallow fields mature into forests. Odum thought that watching changes in these fields could provide insights into how these processes happen in all ecosystems.

With University of Georgia graduate students, Odum mapped the relationships between plants, insects, and other animals in the laboratory’s landscape. They realized that energy itself is one of the few things researchers can follow through an entire ecosystem. Their results contradicted the then-common idea of a food chain as a straight line. They discovered an interlocking food web, with insects and predators both eating a variety of foods and being eaten themselves.

Based on these studies, Odum developed the theory of “systems ecology.” He proposed that ecosystems and their interactions are more than just a random collection of species. In addition to writing the first introductory ecology college textbook, he also authored a number of articles. As he said in a 1969 article in Science, “Is variety only the spice of life or is it a necessity for the long life of the total ecosystem comprising man and nature?”

Building the Institution of Ecology at Oak Ridge

If Odum was the metaphorical first professor of ecology, Oak Ridge National Laboratory (ORNL) was the first college. Through support for its ecological division, ORNL developed the tools and institutional knowledge for ecology to become a major research field in its own right.

Ecological research arose out of ORNL's studies on radioactivity's effects. Because ORNL's Graphite Reactor – only the second nuclear reactor in the world – created waste from uranium fission and the production of plutonium, ORNL scientists needed to understand radioactive waste's influence on living things. While the Biology division focused on cells and the Health Physics division focused on people, radioecology focused on the environment.

The research began in the early 1940s, when ORNL was still called Clinton Laboratories. To understand nuclear waste’s effects, researchers sampled fish for radioactive contamination from the nearby Clinch River as early as 1943.

In the 1950s and 60s, ORNL’s combination of land contaminated by nuclear waste and otherwise undeveloped forest made it an exceptional place to study ecology. By watching how radioactive particles from contaminated sites passed between plants and animals, ecologists could follow radiation through the food web. They then compared those sites to undeveloped and uncontaminated forests, like those in the nearby Great Smoky Mountains.

White Oak Lake was one of those distinctive sites. Unfortunately, as mentioned above, Atomic Age scientists didn’t realize how incredibly harmful even low-level nuclear waste is. As a result, ORNL had disposed of it directly into the lake for nearly a decade. In 1955, they drained the lake as a safety measure.

While the site had a tremendous amount of ecological damage, it provided a unique resource. Ecologists used it to examine radiation’s effects on plants, insects, and small mammals. They even planted corn! These field studies provided much more valuable information on radiation’s movement and effects than laboratory studies could.

In 1958, the scientists again turned their attention to the Clinch River. They hoped to evaluate how diluting nuclear waste in the river affected the downstream environment. Unfortunately, their brand-new research boat didn’t make a good first impression – it sank on its maiden voyage. Despite this setback, ecologists gathered valuable data. For example, by studying the rings in clam shells, they tracked how radioactivity accumulated in the lake over time.

“I had my mind blown away by what they were doing,” said David Reichle, who was a graduate student at Northwestern University. “The movers and shakers would be coming to Oak Ridge if they were interested in ecology. I determined that somehow I had to get down to Oak Ridge and learn some of these techniques.” He joined the lab in 1964 and eventually became its Environmental Sciences division director.

This research both made the most of contaminated land and prevented future damage. By expanding scientists’ understanding of how radioactivity moved in the environment, it led to the laboratories developing better, safer ways of disposing waste.

Oak Ridge had another unparalleled resource – its computers. As early as 1958, researchers were feeding data from field and laboratory studies into differential equations. Starting with the rate at which leaves accumulate on the forest floor, the models expanded to include rates of growth, decomposition, and carbon dioxide movement. Oak Ridge was one of the few places ecologists could simulate even the simplest versions of complex natural systems.

Understanding the Effects of Water Temperature at Hanford

“We had the world’s greatest source of heated water going into any body of water,” said Charles Coutant, who worked as an ecologist at both ORNL and the Hanford site in Washington State (which evolved in part into PNNL).

Hanford scientists conducted comprehensive studies on how changes in temperature affect aquatic ecosystems. While the heated water didn’t appear to directly influence salmon spawning or mortality, scientists found affected salmon were more likely to be eaten by predators. These results demonstrated how changes to ecosystems often have complex and unpredictable effects.

Through the 1960s, the AEC was one of the leading funders of ecological research.

“It was obvious at the time that the center for this new field of research was at the laboratories,” said Reichle.

That influence extends to research done today. The use of radioisotopes as tracers set the stage for the Office of Science’s radiochemistry area. As part of this broad effort to understand effects of radiation on the environment, AEC also sponsored the development of atmospheric general circulation models. These models traced the transport of fallout from atmospheric nuclear tests and helped lead to the earth and atmospheric models that we use today to understand our weather and climate. The studies of forest ecosystems and their processes set the foundation for both basic terrestrial ecosystem research and applied bioenergy research.

As the dedication of ORNL’s environmental science laboratory in 1979 stated, “That quarter century witnessed the evolution of ecology from an obscure, backwater discipline of biology to a broadly used, everyday household word.” The Department of Energy’s national laboratories have and continue to play a key role in that evolution, from ecology’s beginnings in the Atomic Age until now.