Squeezing spheres together creates a protective barrier that combines impressive conductivity with protection from short circuits. 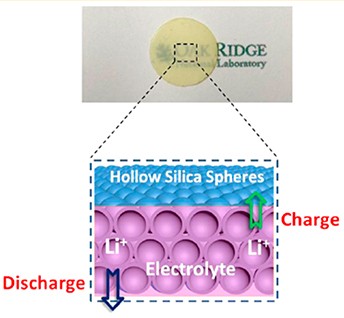 A new protective barrier for lithium-metal battery electrodes based on small spheres of silica can prevent short-circuit failure. The individual hollow spheres are squeezed together to form a freestanding film (top), which is then soaked with a conductive liquid called an electrolyte. The schematic (bottom) shows a cross-section structure of the film. The film has impressive conductivity, offers mechanical protection, and continues to confine the electrolyte to help prevent short circuits. This film can help make rechargeable batteries safer.

Although they can hold more energy than today’s lithium-ion batteries, rechargeable lithium-metal batteries are not as popular due to serious safety problems. The safety problems include failure due to short-circuiting between electrodes. A new protective barrier based on small spheres of silica can prevent this failure. The barrier, a freestanding film, allows the electrode to work at room temperature and hampers the detrimental formation of dendrites, tree-like metallic growths that lead to short-circuit failure. Scientists made this film by high-pressure extrusion of “electrolyte balloons” that confine the conductive liquid, or electrolyte.

In rechargeable lithium-metal batteries, this rigid, conductive film will mitigate dangerous short-circuiting without degrading battery performance. Also, this hollow scaffold could enable broad tunability of a range of electrolytes, such as those based on sodium, magnesium, and aluminum ions, for other rechargeable batteries.

A common failure mechanism in lithium-metal batteries is the growth of tree-like lithium metal dendrites, resulting in short-circuiting. The growth of lithium dendrites during battery recharging has hindered the application of these rechargeable batteries, which have greater energy capacity than conventional lithium-ion batteries. Replacing the liquid electrolyte with a solid electrolyte to block this dendrite formation commonly results in lower conductivity and reduced battery performance. Researchers at the Oak Ridge National Laboratory have developed a versatile method to make solid-like electrolytes with relatively high conductivity at room temperature. They pressed the hollow silica nanospheres into a film to remove voids that are too big for lithium ion transport. This nanoporous film is soaked in a liquid electrolyte. The liquid electrolyte remains confined within the nanospheres. The quasi-solid electrolyte film has a high conductivity at room temperature. Testing this quasi-solid electrolyte film in a battery cell resulted in excellent protection against lithium-dendrite shorting. This versatile method achieved a well-controlled porous nano-architecture with superior conductivity. Scientists can extend the method to other liquid electrolytes to advance other rechargeable battery technologies.