Energy Department to Invest $16 Million in Computer Design of Materials 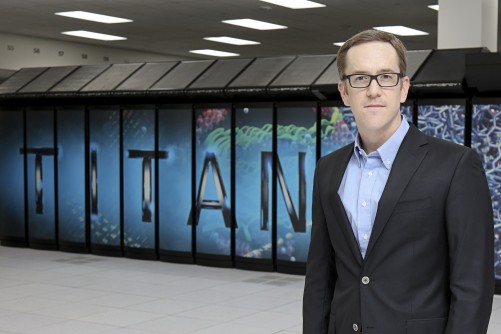 Newswise — OAK RIDGE, Tenn., Aug. 16, 2016—The U.S. Department of Energy announced today that it will invest $16 million over the next four years to accelerate the design of new materials through use of supercomputers. Two four-year projects—one team led by DOE’s Oak Ridge National Laboratory (ORNL), the other team led by DOE’s Lawrence Berkeley National Laboratory (LBNL)—will take advantage of superfast computers at DOE national laboratories by developing software to design fundamentally new functional materials destined to revolutionize applications in alternative and renewable energy, electronics, and a wide range of other fields. The research teams include experts from universities and other national labs.

The new grants—part of DOE’s Computational Materials Sciences (CMS) program begun in 2015 as part of the U.S. Materials Genome Initiative—reflect the enormous recent growth in computing power and the increasing capability of high-performance computers to model and simulate the behavior of matter at the atomic and molecular scales. The teams are expected to develop sophisticated and user-friendly open-source software that captures the essential physics of relevant systems and can be used by the broader research community and by industry to accelerate the design of new functional materials.

“Given the importance of materials to virtually all technologies, computational materials science is a critical area in which the United States needs to be competitive in the twenty-first century and beyond through global leadership in innovation,” said Cherry Murray, director of DOE’s Office of Science, which is funding the research. “These projects will both harness DOE existing high-performance computing capabilities and help pave the way toward ever-more sophisticated software for future generations of machines.”

“ORNL researchers will partner with scientists from national labs and universities to develop software to accurately predict the properties of quantum materials with novel magnetism, optical properties and exotic quantum phases that make them well-suited to energy applications,” said Paul Kent of ORNL, director of the Center for Predictive Simulation of Functional Materials, which includes partners from Argonne, Lawrence Livermore, Oak Ridge and Sandia National Laboratories and North Carolina State University and the University of California–Berkeley. “Our simulations will rely on current petascale and future exascale capabilities at DOE supercomputing centers. To validate the predictions about material behavior, we’ll conduct experiments and use the facilities of the Advanced Photon Source, Spallation Neutron Source and the Nanoscale Science Research Centers.”

Said the center’s thrust leader for prediction and validation, Olle Heinonen, “At Argonne, our expertise in combining state-of-the-art, oxide molecular beam epitaxy growth of new materials with characterization at the Advanced Photon Source and the Center for Nanoscale Materials will enable us to offer new and precise insight into the complex properties important to materials design. We are excited to bring our particular capabilities in materials, as well as expertise in software, to the center so that the labs can comprehensively tackle this challenge.”

Researchers are expected to make use of the 30-petaflop/s Cori supercomputer now being installed at the National Energy Research Scientific Computing Center (NERSC) at Berkeley Lab, the 27-petaflop/s Titan computer at the Oak Ridge Leadership Computing Facility (OLCF) and the 10-petaflop/s Mira computer at Argonne Leadership Computing Facility (ALCF). OLCF, ALCF and NERSC are all DOE Office of Science User Facilities. One petaflop/s is1015 or a million times a billion floating-point operations per second.

In addition, a new generation of machines is scheduled for deployment between 2016 and 2019 that will take peak performance as high as 200 petaflops. Ultimately the software produced by these projects is expected to evolve to run on exascale machines, capable of 1,000 petaflops and projected for deployment in the mid-2020s.

The new research projects will begin in Fiscal Year 2016. They expand the ongoing CMS research effort, which began in FY 2015 with three initial projects, led respectively by ANL, Brookhaven National Laboratory and the University of Southern California.