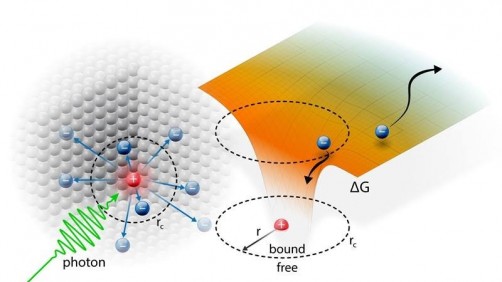 In a solar cell, when light (green arrow) is absorbed by an organic semiconductor, an electron (-) can remain associated with a hole (+), or transfer beyond a critical radius (rc) and form a free carrier. Images: real space (left), Gibbs energy (right).

Solar cells based on organic molecules offer potential advantages over conventional devices for converting light into electricity. These organic solar cells could be inexpensive, durable, and easy to make. However, organic cells do not yet have performance that matches conventional devices. Scientists’ efforts to improve performance have been limited by their limited understanding of how electrons excited by light (or “photoexcited”) become “free carriers.” In principle, free carriers flow across a material and emerge as an electrical current. Prior scientific studies suggest that photoexcitation leads to a tightly bound pair consisting of an electron and a hole. These studies did not describe how to overcome the strong binding forces to form free carriers. This new study reveals that more sites on neighboring molecules can accept electrons, explaining how free carriers form directly.

This research developed a new model called Distribution Range Electron Transfer (DRET). Previous models for the generation of free carriers in organic solar cells have generally invoked new physical phenomena to explain experimental results. In particular, they have said that free carriers can form with efficiency that approaches 100 percent in a material where opposite charges are traditionally difficult to separate and use. In this new study, scientists suggest a simpler alternative using well-established concepts. They rely on a simple model of processes that transfer electrons in molecules, known as Marcus theory, a model for which Rudy Marcus was awarded a Nobel Prize in 1992. The new DRET model could unlock new pathways to efficient organic solar cells.

Developed by researchers from the National Renewable Energy Laboratory (NREL), the new model explains free carrier generation in organic solar cells using established concepts including Marcus theory for electron transfer, combined with a consideration of the entropy associated with the charge-transfer interface and the possibility of long-range transfer events. The model shows that existing design rules for solution-phase electron transfer processes can be applied to organic photovoltaic systems. These rules include, first, that the driving force is calculated using the well-known Gibbs energy term. Second, that the role of reorganization energy is identified. Third, factors that control the distance dependence of the electronic coupling are identified. The model fits experimental data gathered using time-resolved microwave conductivity experiments to map out the normal, optimal, and inverted regimes for free carrier generation efficiency. Qualitative agreement with long observed behaviors in organic photovoltaic devices provides a unified platform for understanding the products of photoinduced electron transfer in both solution and solid-phase systems. Integration of this new model that effectively captures the discrete molecular nature of the components comprising the hierarchical structure of organic solar cells can enable researchers to develop materials for more efficient charge generation processes.

Funding was provided by the Department of Energy Office of Science, Office of Basic Energy Sciences, Division of Chemical Sciences, Geosciences, and Biosciences, Solar Photochemistry Program. Squaraine synthesis and characterization were supported by the Office of Naval Research.