Members of the MRX team with the device in the background. From left, Masaaki Yamada, Jongsoo Yoo, Jonathan Jara-Almonte, Will Fox, and Hantao Ji. 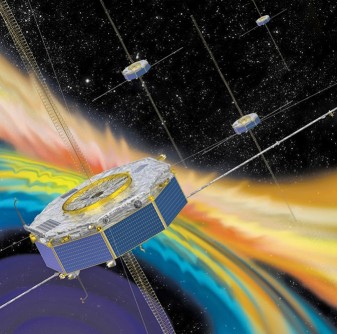 Sketch of the Magnetospheric Multiscale Mission.

As on Earth, so in space. A four-satellite mission that is studying magnetic reconnection — the breaking apart and explosive reconnection of the magnetic field lines in plasma that occurs throughout the universe — has found key aspects of the process in space to be strikingly similar to those found in experiments at the U.S. Department of Energy’s (DOE) Princeton Plasma Physics Laboratory (PPPL). The similarities show how the studies complement each other: The laboratory captures important global features of reconnection and the spacecraft documents local key properties as they occur.

The observations made by the Magnetospheric Multiscale Satellite (MMS) mission, which NASA launched in 2015 to study reconnection in the magnetic field that surrounds the Earth, correspond quite well with past and present laboratory findings of the Magnetic Reconnection Experiment (MRX) at PPPL. Previous MRX research uncovered the process by which rapid reconnection occurs and identified the amount of magnetic energy that is converted to particle energy during the process, which gives rise to northern lights, solar flares and geomagnetic storms that can disrupt cell phone service, black out power grids and damage orbiting satellites.

The previous MRX findings served as guidelines for measurements taken by the MMS mission, which seeks to understand the region in which the reconnection of field lines in plasma — the state of matter composed of free electrons and atomic nuclei, or ions — takes place. The latest PPPL experiments extend the findings to new areas of agreement. “Despite huge differences in the size of the reconnection layers in the MRX and in space, remarkably similar characteristics are observed in both,” said Masaaki Yamada, principal investigator on the MRX, and lead author of the recent paper reporting the results in the December 6 edition of Nature Communications (link is external).

In the new paper, researchers examine what is called the “two-fluid” physics of reconnection that describes each behavior of ions and electrons differently during the process. Such physics dominates magnetic reconnection in both MRX and magnetospheric plasma systems, allowing for an unprecedented level of cross-examination between laboratory measurements and space observations.

Following are key findings of the two-fluid, asymmetric research on MRX that is shown to be in striking agreement with measurements of electron and ion behavior by the space satellites and the conversion of magnetic energy to particle energy. Computer simulations aided these findings:

• Electrons. The experiments demonstrated that electron current flows perpendicular, and not parallel as once thought, to the magnetic field. This flow is key to the conversion of magnetic energy in electrons that occurs in a narrow boundary layer called the “electron diffusion region” where rapid reconnection takes place. The finding is consistent with the recent MMS space measurements and new in the laboratory for asymmetric reconnection.

• Ions. The ion current also flows perpendicular to the magnetic field as in the electron case, and likewise is key to the conversion of ion magnetic energy to particle energy. For ions, this conversion occurs in the wider “ion diffusion region” between converging plasmas and is a similarly recent finding about asymmetric reconnection in laboratory plasmas.

PPPL researchers contributing to this study were Jongsoo Yoo, Will Fox, Jonathan Jara-Almote and Hantao Ji. Also contributing were physicists at the NASA Goddard Space Flight Center, Los Alamos National Laboratory, the Southwest Research Institute, and the universities of New Hampshire and Bergen in Bergen, Norway. Computer simulations were conducted at Los Alamos National Laboratory. Support for this work comes from DOE’s Office of Science, NASA, and the National Science Foundation.

Caption: Members of the MRX team with the device in the background. From left, Masaaki Yamada, Jongsoo Yoo, Jonathan Jara-Almonte, Will Fox, and Hantao Ji. 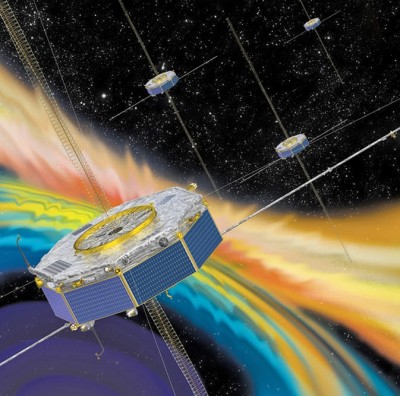