Extracting Signs of the Elusive Neutrino

Scientists use software to "develop" images that trace neutrinos' interactions in a bath of cold liquid argon. 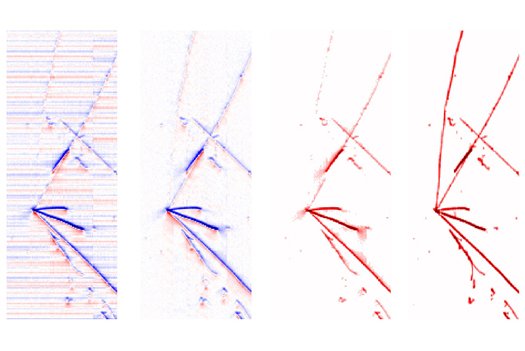 Two-dimensional images of a neutrino interaction in MicroBooNE shown at different stages of signal processing reveal cleaner and cleaner signals. From left: the original data recorded by the detector with some excess noise (horizontal lines); the same data after removal of excess noise; the reconstructed charge distribution after a special technique was applied in one dimension; the reconstructed charge distribution after the latest version of signal processing.

Neutrinos are elusive subatomic particles that may have played a key role in the evolution of the universe. Scientists study them by capturing their interactions in giant particle detectors. The particles that emerge from these interactions can leave tracks in the detectors. The science of tracing those tracks is as subtle as neutrinos themselves. Scientists developed algorithms that clarify the signal that neutrinos leave behind in this school-bus-sized detector.

If you want sharp images from a camera using film, it’s important to get the chemistry right. If you want clear images from neutrino detectors, it’s vital to get the algorithms right. Here, researchers conquered significant challenges in tracking neutrinos in the detector. Their work provides cleaner images of how particles move. It also offers a solid foundation for using the technology for precision physics measurements that can offer insights into the nature of the universe.

The central piece of the MicroBooNE detector is a liquid-argon time projection chamber (LArTPC) filled with argon in liquid form at minus 303 degrees Fahrenheit and lined with electronics designed to operate in that extremely cold environment. This assembly acts like a powerful 3D digital camera to capture the trajectories of particles generated when neutrinos interact with argon atoms in the tank.

By tracking the timing and locations of these signals with complex algorithms, the detector can construct images of the electrons’ trajectories to reveal information about the energy and flavor of the neutrino that triggered each chain of events. Just as it’s important to get the chemistry right when processing film, neutrino-tracking scientists face challenges in developing their algorithms. Scientists at Brookhaven National Laboratory, part of the MicroBooNE Collaboration, have conquered two significant challenges in tracking neutrinos in their detector.

For one thing, the signals are relatively small. It is particularly difficult to discriminate the tiny signals from background “noise." By designing some of the electronics so that they can operate inside the cold liquid-argon chamber, the team helped to minimize noise by reducing the distance signals have to travel before being read out. These low-noise “cold electronics” are a crucial technology for large LArTPCs.

The team also developed significantly improved simulations of expected LArTPC signals and noise. Comparing the simulations with results extracted from real data produced consistent results, which is a crucial step toward using the detector for future physics studies.

This work was supported by the Department of Energy, Office of Science, Offices of High Energy Physics and Office of Nuclear Physics; the National Science Foundation; the Swiss National Science Foundation; the Science and Technology Facilities Council of the United Kingdom; and The Royal Society (United Kingdom). Additional support for the laser calibration system and cosmic ray tagger was provided by the Albert Einstein Center for Fundamental Physics, Bern, Switzerland.