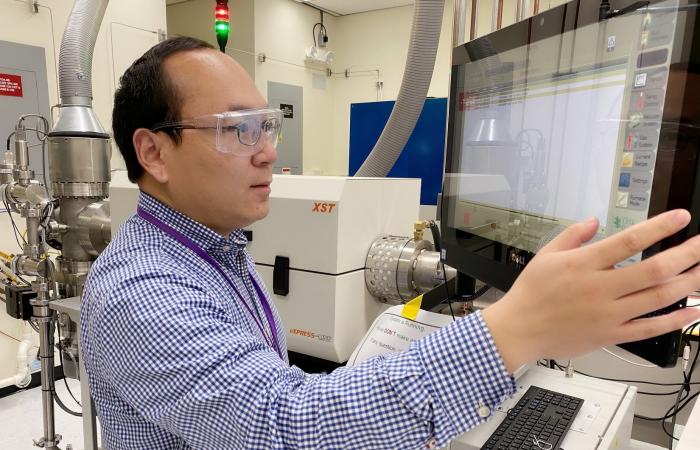 Xunxiang Hu, a Eugene P. Wigner Fellow in ORNL’s Materials Science and Technology Division, designed this machine to produce large, crack-free pieces of yttrium hydride to be used as a moderator in the core of ORNL’s Transformational Challenge Reactor and other microreactors. 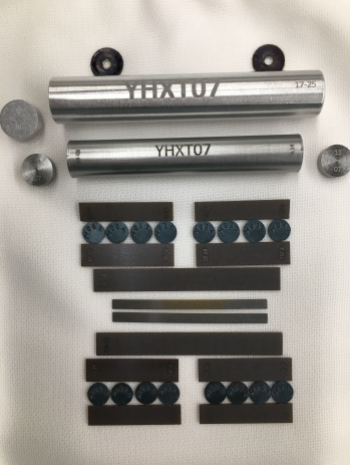 Newswise — About 60 years ago, scientists discovered that a certain rare earth metal-hydrogen mixture, yttrium, could be the ideal moderator to go inside small, gas-cooled nuclear reactors.

But there wasn’t a pure and abundant source of yttrium readily available, so no one had developed the large-scale process to produce the crack-free pieces that would be needed — until Oak Ridge National Laboratory researcher Xunxiang Hu took on the challenge last year.

From the early stages of the nuclear era, researchers have been interested in using metal hydrides — metal elements bonded to hydrogen — in reactors. As a moderator in a reactor core, metal hydrides can slow fast neutrons without capturing them, making it possible for those neutrons to collide with uranium or other isotopes to create fission, the chain reaction that produces nuclear energy.

While most existing reactors use pressurized water as a moderator, metal hydrides contain a higher concentration of hydrogen and can work at high temperatures without the high pressure that water requires. This means the reactor core can be much smaller, can operate more efficiently and will generate less waste.

In the 1950s and 1960s, most metal hydride experiments focused on zirconium hydride, a more common, less expensive metal that already was being used as a cladding material for nuclear reactors in submarines and land-based power stations. Scientists also recognized that a rare yttrium metal yielded a hydride, or YHx, that was more stable than zirconium hydride at elevated temperatures, but it was also 20 times more expensive and therefore more difficult to procure.

These days, yttrium metal is readily available, and it may be a better option for a high-performance moderator in microreactors. The challenge is to consistently produce the massive samples, free of cracks and flaws, needed for use in a reactor.

That’s what Hu, a Eugene P. Wigner Fellow at the Department of Energy’s ORNL, set out to do in March 2019.

In less than a year, he perfected a way to produce large pieces of yttrium hydride, free of cracks and other flaws, to be used as a moderator in the core of the Transformational Challenge Reactor, a 3D-printed reactor funded by DOE’s Office of Nuclear Energy.

High-purity yttrium can be purchased from industrial suppliers, but it was up to Hu’s team to form solid hydrides, a compound that is not commercially available.

“It’s easy to just form a hydride powder, but we want a crack-free solid, perfect hydride on a large scale,” Hu said.

Stress cracks form when the concentration of hydrogen varies significantly in the work piece, resulting in different swelling rates at different locations. The cracks can impact thermal conductivity and hydrogen release. To prevent cracks, the temperature, hydrogen percentage, flow rate and other parameters must be exact.

Hu started experimenting with an existing system, producing a half-gram of crack-free YHx.

“We experienced a lot of failures, but we learn from our failures — how to get nice, crack-free samples,” Hu said. “We got it where we wanted it in the first two months.”

Three months after that, they were able to produce crack-free YHx in complex geometries.

However, that machine wasn’t large enough to produce kilograms of YHx, which was what they needed.

Hu set out to design a machine that would be able to produce those larger amounts. By May 2019, he had finished the design for a high-temperature, high-vacuum furnace and had sent it to a contract fabricator.

“We wanted the system by the end of the fiscal year,” Hu said. “We were being aggressive.”

Meanwhile, Hu and his team were constantly increasing their knowledge of the properties of YHx, building out a database to catalog all its thermal, mechanical and neutron scattering properties.

“If people want to use this metal hydride, they need to know its properties: its stability, how it interacts with other materials,” Hu said.

ORNL is “perfectly positioned” to develop a new moderator, he said, because of top, talented scientists; institutional knowledge in materials science; and the availability of the High Flux Isotope Reactor, the Spallation Neutron Source, and other world-class experimental facilities.

“Not only can we fabricate materials, but we also have so many fantastic instruments and user facilities to employ to characterize the materials,” he said. The information from those characterization activities is essential in ensuring this hydride can be used in nuclear reactors.

‘We made it happen’

When the new system arrived in November 2019, Hu’s team deployed it immediately. Within a month, they found the right parameters to produce crack-free YHx. By the year’s end, they were producing large pieces of crack-free YHx weighing multiple kilograms.

Right now, Hu can produce uncracked half-kilogram rods of YHx that are 10 inches long and have 1‑inch diameters.

That’s likely larger than will be needed for the Transformational Challenge Reactor, Hu said. But he can see much broader applications. The system he designed allows for fabrication of pieces up to 15 inches long with a 3-inch diameter, but it can be easily modified to accommodate a larger furnace if larger pieces are needed in the future, he said.

As they continue to build out a complete database on YHx, “a lot of people have shown interest in what we’re doing,” Hu said. “Not only are microreactor programs interested, but also there are applications for space reactors, so there will be opportunities with NASA.

“We made a decision in late March 2019 that TCR needs solid yttrium hydride, and in 10 months, we made it happen.”The Transformational Challenge Reactor is supported by DOE’s Office of Nuclear Energy.

UT-Battelle LLC manages ORNL for DOE’s Office of Science, the single largest supporter of basic research in the physical sciences in the United States. The Office of Science is working to address some of the most pressing challenges of our time. For more information, please visit https://energy.gov/science.

Caption: Xunxiang Hu, a Eugene P. Wigner Fellow in ORNL’s Materials Science and Technology Division, designed this machine to produce large, crack-free pieces of yttrium hydride to be used as a moderator in the core of ORNL’s Transformational Challenge Reactor and other microreactors.