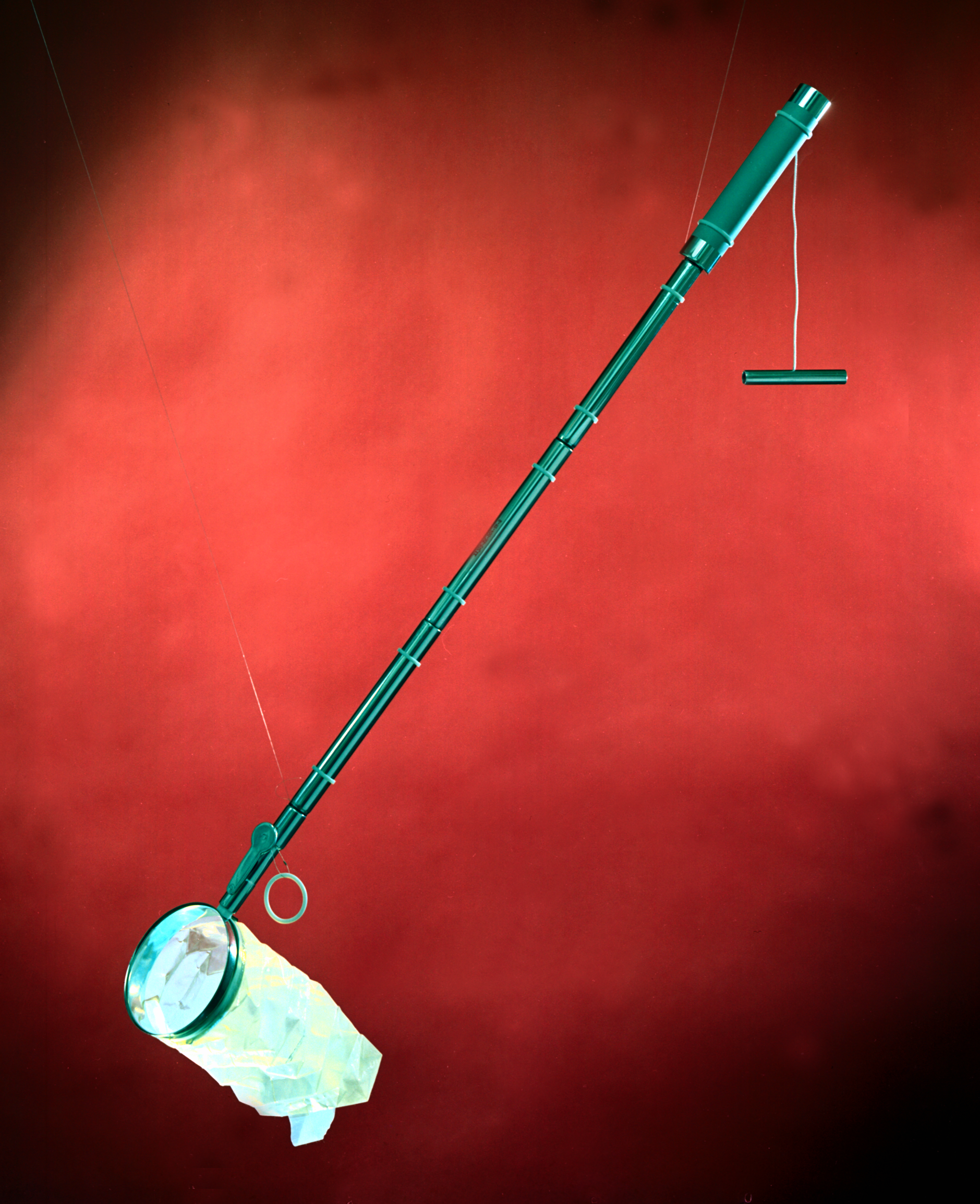 The contingency soil sampler’s pull cord and removable Teflon bag allowed the device to be completely folded and stowed on an astronaut’s space suit. The tool allowed astronauts with limited mobility to secure a small sample of lunar rock and soil without introducing outside contamination. 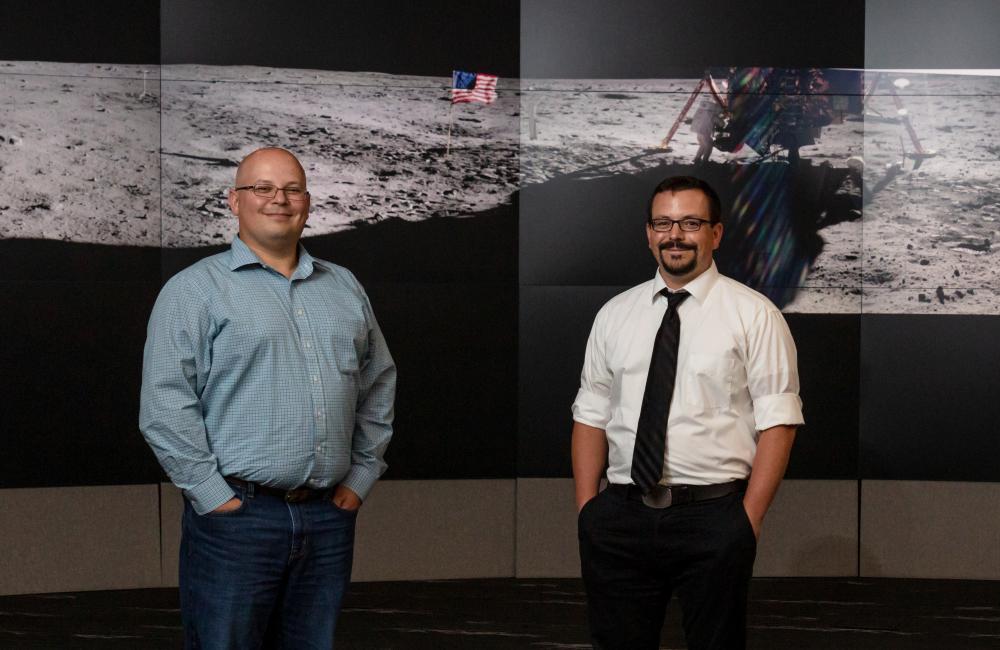 Kevin (left) and Ryan Gaddis are grandsons of Glen Ellis, who worked as a draftsman at Oak Ridge National Laboratory in the 1960s and drew the plans for NASA’s contingency soil sampler, or “moon scoop,” used to collect lunar soil and rock on the Apollo missions. The brothers both work at ORNL.

According to NASA’s lunar surface operations plan, Armstrong’s top priority after his famous first steps should have been to immediately take a contingency sample—a small sample of soil—to provide scientists at least a piece of the moon if the mission had to be abandoned early. Armstrong instead took a series of photos—a slightly lower priority item in the plan—as flight control awaited the contingency sample.

Finally, he removed a folded gadget from a pocket on his left thigh. When he pulled a cord, the device’s aluminum tubing snapped into place, forming a thin rod with a Teflon bag fastened to a ring on the end. Armstrong dipped this scoop into the lunar soil several times, removed the Teflon bag, sealed it and stowed about 2.2 pounds of rock and soil in his pocket.

What flight control called the “science priority” of the mission was preserved; mankind had its first ever collection of moon rocks.

Back on earth, in their basement in Lenoir City, Tennessee, the Ellis family sat with eyes glued to their black and white television to witness a man walk on the moon. Michael, 11, Jeanne, 14, and Lee, 18, watched alongside their parents, Glen and Alice Ellis.

Like flight control, the teenagers had a particular interest in the contingency sample. But theirs was more personal than scientific; only a few months earlier, the odd device they watched Armstrong drag across the surface of the moon had been a blueprint sprawled across their father’s drawing board at Oak Ridge National Laboratory.

Glen Ellis “got on” at the lab sometime in the mid ‘60s, according to his children. Born in 1926 to tenant farmers in Lenoir City, he hadn’t finished high school when he joined the navy during World War II. He later served as a mechanic on a bomber during the Korean War.

Though he never went back for a formal education besides studying drafting at vocational school, Glen Ellis’ talent for drawing and design earned him a job as a draftsman at ORNL.

A man who rarely brought his work life home, Glen shared little about his job with his five children, but he told his family about one project—a design he drew for NASA.

“It was a big deal because we did know that he was involved in it,” says Michael Ellis, Glen’s youngest son. “He did talk about making this scoop.”

The collapsible “scoop” was made of 12 individual parts. Weighing in around 2.6 pounds and resembling a space-age butterfly net, the contingency soil sampler played an important role on Apollo 11 and subsequent lunar landing missions 12, 14 and 15. While the stated goal of Apollo 11 was to “land men on the moon and return them home,” scientists were also extremely interested in finding out what materials made up the moon.

The contingency sampler’s job to “increase the probability of returning a lunar sample to earth,” as described in the lunar surface operations plan, was essential.

But Glen Ellis didn’t speak of it in those terms.

“The only reference that I remember wasn’t any great source of pride, just the job he had to do,” says Ryan Gaddis, Glen Ellis’ grandson by his daughter, Jeanne Gaddis. “He was like, ‘yeah it was like a pooper scooper.’”

In fact, though Ellis’ kids knew their father was involved making the soil sampler—something they referred to simply as the “moon scoop”—the details were always a bit of a mystery. It earned Ellis just one headline in the Lenoir City newspaper years after the fact; “Local man makes moon device.” To this day, the family isn’t certain whether their father both developed the concept for the scoop and drew the plans or if he was drafting someone else’s idea.

The way Gene Shaver Jr. tells it—in a post he shared on Facebook—the idea for Glen Ellis’ moon scoop came from a day on the golf course.

Glen’s team was taking a break from their project, a tricky design for a device that could allow an astronaut with limited mobility to seal a sample of lunar rock and soil without introducing contamination, when a member of his golf party hit a ball into the water. The unfortunate golfer fished it out with a golf ball retriever.

Shaver, a nephew of Glen Ellis, says that the former ORNL draftsman would smile and chuckle when he told the next part of the story.

“Glen said he was ribbing the guy and said something like, ‘If you would just put a handle on that thing, like stores use to grab from the top shelf, and change the end so it clamps shut and seals rocks in a sandwich bag…’”

According to Shaver, that was the “bingo moment.” Glen returned back to his drawing board to draft the plans for the contingency sampler.

Two of Glen’s grandsons have recently followed in his footsteps pursuing careers at ORNL; Kevin Gaddis is a radiochemist in the Isotope and Fuel Cycle Technology Division. Ryan Gaddis manages the computer systems used for employee training.

Their grandfather’s professional legacy inspires them “to do work that matters,” Kevin says.

While neither grandson had heard Shaver’s version of the story before, it’s an example of what Ryan remembers as their grandfather’s distinct, “engineer’s sense of humor.”

It’s also an example of both the memories and new pieces of information that have surfaced as the Ellis family has grown increasingly interested in Glen’s contribution to the Apollo missions.

Since his death in 1997, they’ve learned that one of the contingency samplers is on display at the Smithsonian’s National Air and Space Museum in Washington D.C. They learned that during the Apollo 14 mission, Alan Shepard used the shaft of the contingency sampler with a golf club head attached to famously play golf on the surface of the moon—a fact that would have undoubtedly tickled Glen Ellis.

“I’ve really enjoyed catching some things I don’t guess I knew anything about,” says Lee Ellis, Glen’s oldest son. “Reliving some of it is good.”

Just within the last six years, Kevin, who was always fascinated by the moon missions, remembered that the original design for the contingency sampler had been left to his father.

The plans now hang in Kevin’s living room, a reminder of the time a man walked on the moon 50 years ago, but more importantly, a reminder of his grandfather.

ORNL is managed by UT-Battelle for the DOE’s Office of Science, the single largest supporter of basic research in the physical sciences in the United States. DOE’s Office of Science is working to address some of the most pressing challenges of our time. For more information, please visit https://energy.gov/science.

Caption: The contingency soil sampler’s pull cord and removable Teflon bag allowed the device to be completely folded and stowed on an astronaut’s space suit. The tool allowed astronauts with limited mobility to secure a small sample of lunar rock and soil without introducing outside contamination.

Caption: Kevin (left) and Ryan Gaddis are grandsons of Glen Ellis, who worked as a draftsman at Oak Ridge National Laboratory in the 1960s and drew the plans for NASA’s contingency soil sampler, or “moon scoop,” used to collect lunar soil and rock on the Apollo missions. The brothers both work at ORNL.