The Office of Science has been investing in applied math and computational science for 40 years, leading to world-class infrastructure and research. 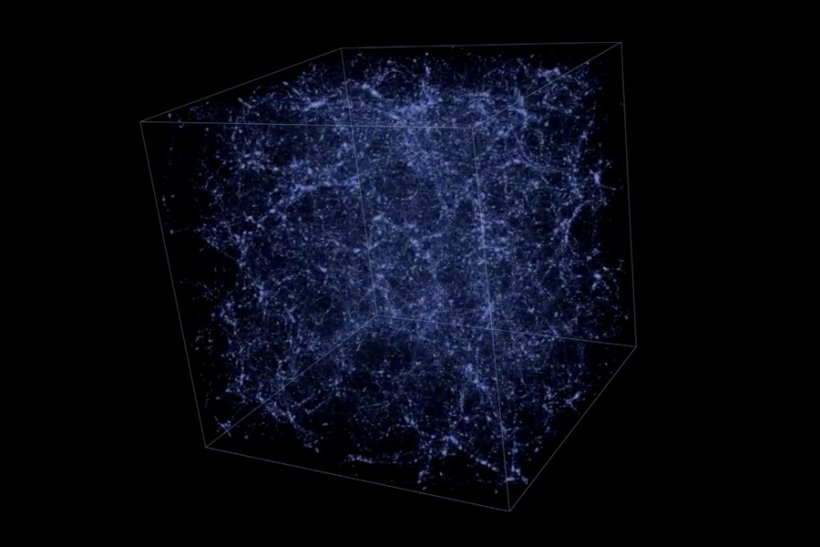 A frame from the animation “ESnet: Visualizing the Universe at 100 Gbps,” which featured a simulation that tracked the evolution of the universe from its homogenous dawn 13.7 billion years ago to today. ESnet is the premier network for scientific research and a DOE Office of Science user facility.

Newswise — In 1980, home computers had been available for five years, Sir Tim Berners-Lee established the precursor to the World Wide Web, and hard disk drives held a mere five megabytes each. That year, the Department of Energy’s (DOE) Office of Energy Research – now the Office of Science – had a small but dynamic program in applied mathematics, advanced computing, and networking for scientific research. Forty years later, the program, now called Advanced Scientific Computing Research (ASCR), still supports advances in scientific progress and computing, as described in the new [email protected] report.

ASCR’s mission now is the same as it was back then – on steroids. It’s to discover, develop, and deploy computational science and high-performing networking tools and services that enable scientific researchers to analyze, model, simulate, and predict complex phenomena in energy, the environment, and security important to DOE and the nation.

To fulfill that mission, ASCR takes two main approaches. It provides world-class resources to researchers across the Office of Science’s program areas. These resources include supercomputers, modeling tools, high-speed networks, and the technical support to use them. In fact, they’re the backbone to all of our scientific research. ASCR also funds foundational research in computational science and engineering.

In terms of user facilities, ASCR supports three supercomputing centers: the Argonne Leadership Computing Facility, the Oak Ridge Leadership Computing Facility, and the National Energy Research Scientific Computing Center. Computers at these facilities regularly rank in the list of the top 10 most powerful computers in the world. Nearly 10,000 researchers use these computers annually, and these investigators released about 3,000 journal articles in 2018 alone.

But these resources aren’t just limited to national lab and university scientists. Since 2004, private companies large and small have been able to apply for access to these computers on a competitive basis. Both GE and Pratt & Whitney have used advanced modeling to make their jet engines quieter and more fuel-efficient. A small environmental risk start-up firm used them to create some of the highest resolution flood risk maps in the world. These maps now help cities understand flood risk at the level of a city block.

ASCR has also connected universities around the world in a way that enables scientists to feel like they have a “supercomputer next door.” ESnet, the Office of Science’s massive network devoted to moving scientific data, began with a 56 kbps modem. Now, it moves 100 petabytes of data a month. That number is the equivalent of 100 billion books worth of data. It’s 41 million times faster than the system’s original modem. Networking tools developed for ESnet, like the On-Demand Secure Circuits and Reservation System, have made sending massive scientific data sets easier and more efficient than ever before.

Improvements in modeling supported by ASCR have enabled scientists to approach research in an entirely new way. With simulations run on high-performance computers, scientists can create virtual versions of real-world events. Older climate models that used 100 kilometer grids didn’t predict a number of tropical cyclones. Now, new models that use 25 kilometer grids capture the storms that would have been previously missed. Similarly, improving the algorithms used in modeling software has improved physicists’ understanding of how air flow moves around airplane wings. ASCR facilities are even collaborating with the National Cancer Institute to build predictive models for cancer treatment.

In the past four decades, computing has seen a revolution in power, capability, and ubiquity. ASCR has participated in developing much of this technology as well as found powerful ways to bring it to the scientists moving research forward.

This week, many researchers and facilities are highlighting their research supported by ASCR at the SC20 International Conference for High-Performance Computing, Networking, Storage, and Analysis virtual conference.