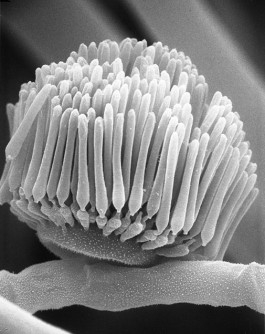 The genome of the Linderina pennispora, a fungus belonging to the earliest branches of the fungal kingdom, was sequenced and annotated as part of a Nature Genetics study.

Newswise — DNA, the molecule carrying instructions for development, growth, function, and reproduction, is made up of four bases. These four bases are cytosine (C), guanine (G), adenine (A), and thymine (T). Subtle changes to the bases can affect the activity of a DNA segment. The research explores a less known modification, adding a methyl group to base 6 of adenine (6mA) in early diverging fungi, which are studied for their potential fuel production. The early diverging fungi had methylated adenines up to 2.8 percent of the time, much higher than is seen in more complex cells.

Many fungi digest plant matter and release chemicals with potential bioenergy uses. In comparison to other lineages, early diverging fungi have not been well studied or understood. The discovery of adenine methylation with effects on gene expression may explain the historic difficulty in altering the DNA of early diverging fungi. The findings may aid in developing tools to turn fungi into biofuel producers.

For the first time, scientists identified 6mA base modification as a widespread marker for transcriptionally active genes in early diverging fungi. The researchers examined long-read sequences from 16 diverse fungal genomes for the presence of adenine methylation. In the early diverging fungi, up to 2.8 percent of adenines were methylated, much higher than is seen in the eukaryotes and the more derived fungi (both less than 0.4 percent). Interestingly, despite fungi and animals’ closer phylogenetic relation, early diverging fungi and algae — two distantly related kingdoms — are more similar in 6mA profiles than their more recently diverging — but more closely related — fungi and animals. In early diverging fungi and algae, 6mA’s presence signals gene expression, while the role appears reversed in animals. This significant finding suggests 6mA’s association with gene expression is ancestral to the eukaryotic domain of life. This research highlights the variation in how 6mA is used to modify gene expression across eukaryotes, further defining the collective understanding of transcriptional regulation in this domain of life.