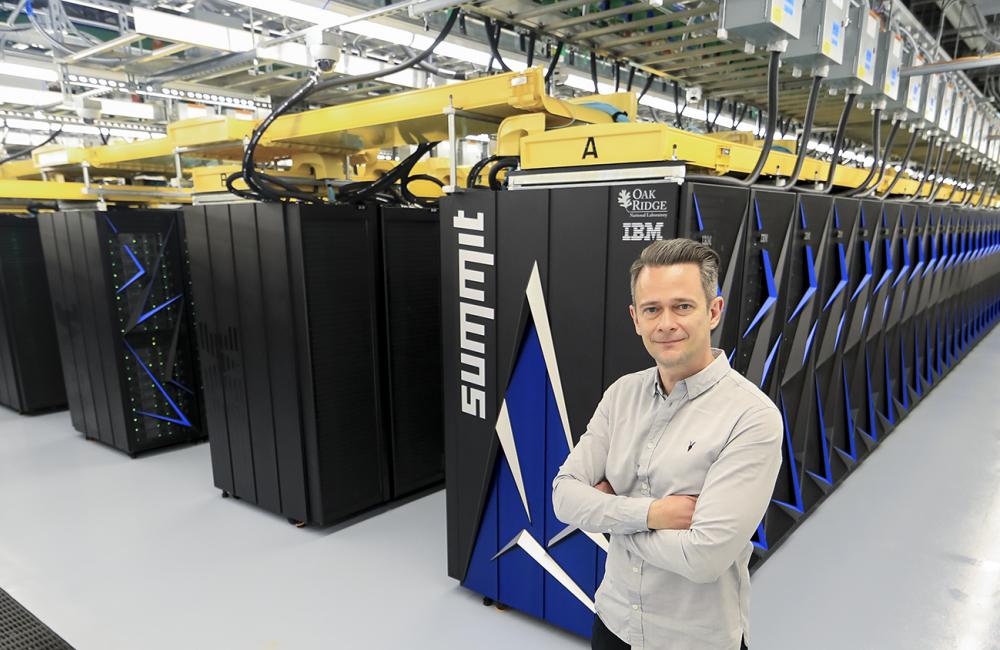 Newswise — At the nexus of theory and computation, physicist Gaute Hagen of the Department of Energy’s Oak Ridge National Laboratory runs advanced models on powerful supercomputers to explore how protons and neutrons interact to “build” an atomic nucleus from scratch. His fundamental research improves predictions about nuclear energy, nuclear security and astrophysics.

“How did matter that forms our universe come to be?” asked Hagen. “How does matter organize itself based on what we know about elementary particles and their interactions? Do we fully understand how these particles interact?”

The lightest nuclei, hydrogen and helium, formed during the Big Bang. Heavier elements, up to iron, are made in stars by progressively fusing those lighter nuclei.  The heaviest nuclei form in extreme environments when lighter nuclei rapidly capture neutrons and undergo beta decays.

For example, building nickel-78, a neutron-rich nucleus that is especially strongly bound, or “doubly magic,” requires 28 protons and 50 neutrons interacting through the strong force. “To solve the Schrödinger equation for such a huge system is a tremendous challenge,” Hagen said. “It is only possible using advanced quantum mechanical models and serious computing power.”

Through DOE’s Scientific Discovery Through Advanced Computing program, Hagen participates in the NUCLEI project to calculate nuclear structure and reactions from first principles; its collaborators represent 7 universities and 5 national labs. Moreover, he is the lead principal investigator of a DOE Innovative and Novel Computational Impact on Theory and Experiment award of time on supercomputers at Argonne and Oak Ridge National Laboratories for computations that complement part of the physics addressed under NUCLEI.

Theoretical physicists build models and run them on supercomputers to simulate the formation of atomic nuclei and study their structures and interactions. Theoretical predictions can then be compared with data from experiments at new facilities producing increasingly neutron-rich nuclei. If the observations are close to the predictions, the models are validated.

“I never planned to become a physicist or end up at Oak Ridge,” said Hagen, who hails from Norway. “That was a random walk.”

Graduating from high school in 1994, he planned to follow in the footsteps of his father, an economics professor, but his grades were not good enough to get into the top-ranked Norwegian School of Economics in Bergen. A year of mandatory military service in the King’s Guard gave Hagen fresh perspective on his life. At 20, he entered the University of Bergen and earned a bachelor’s degree in the philosophy of science. Wanting to continue for a doctorate, but realizing he lacked math and science backgrounds that would aid his dissertation, he signed up for classes in those fields—and a scientist was born. He went on to earn a master’s degree in nuclear physics.

Entering a PhD program, he used pen and paper or simple computer codes for calculations of the Schrödinger equation pertaining to two or three particles. One day his advisor introduced him to  University of Oslo professor Morten Hjorth-Jensen, who used advanced computing to solve physics problems.

“The fact that you could use large clusters of computers in parallel to solve for several tens of particles was intriguing to me,” Hagen said. “That changed my whole perspective on what you can do if you have the right resources and employ the right methods.”

Hagen finished his graduate studies in Oslo, working with Hjorth-Jensen and taking his computing class. In 2005, collaborators of his new mentor—ORNL’s David Dean and the University of Tennessee’s Thomas Papenbrock—sought a postdoctoral fellow. A week after receiving his doctorate, Hagen found himself on a plane to Tennessee.

For his work at ORNL, Hagen used a numerical technique to describe systems of many interacting particles, such as atomic nuclei containing protons and neutrons. He collaborated with experts worldwide who were specializing in different aspects of the challenge and ran his calculations on some of the world’s most powerful supercomputers.

“Computing had taken such an important role in the work I did that having that available made a big difference,” he said. In 2008, he accepted a staff job at ORNL.

That year Hagen found another reason to stay in Tennessee—he met the woman who became his wife. She works in TV production and manages a vintage boutique in downtown Knoxville.

Hagen, his wife and stepson spend some vacations at his father’s farm by the sea in northern Norway. There the physicist enjoys snowboarding, fishing and backpacking, “getting lost in remote areas, away from people, where it’s quiet and peaceful. Back to the basics.”

A central question he is trying to answer is: what is the size of a nucleus? The difference between the radii of neutron and proton distributions—called the “neutron skin”— has implications for the equation-of-state of neutron matter and neutron stars.

In 2015, a team led by Hagen predicted  properties of the neutron skin of the calcium-48 nucleus; the results were published in Nature Physics. In progress or planned are experiments by others to measure various neutron skins. The COHERENT experiment at ORNL’s Spallation Neutron Source did so for argon-40 by measuring how neutrinos—particles that interact only weakly with nuclei—scatter off of this nucleus. Studies of parity-violating electron scattering on lead-208 and calcium-48—topics of the PREX2 and CREX experiments, respectively—are planned at Thomas Jefferson National Accelerator Facility.

One recent calculation in a study Hagen led solved  a 50-year-old puzzle about why beta decays of atomic nuclei are slower than expected based on the beta decays of free neutrons. Other calculations explore isotopes to be made and measured at DOE’s Facility for Rare Isotope Beams, under construction at Michigan State University, when it opens in 2022.

Hagen’s team has made several predictions about neutron-rich nuclei observed at experimental facilities worldwide. For example, 2016 predictions for the magicity of nickel-78 were confirmed at RIKEN in Japan and published in Nature this year. Now the team is developing methods to predict behavior of neutron-rich isotopes beyond nickel-78 to find out how many neutrons can be added before a nucleus falls apart.

“Progress has exploded in recent years because we have methods that scale more favorably with the complexity of the system, and we have ever-increasing computing power,” Hagen said. At the Oak Ridge Leadership Computing Facility, he has worked on Jaguar (1.75 peak petaflops), Titan (27 peak petaflops) and Summit (200 peak petaflops) supercomputers. “That’s changed the way that we solve problems.”

His team currently calculates the probability of a process called neutrino-less double-beta decay in calcium-48 and germanium-76. This process has yet to be observed but if seen would imply the neutrino is its own anti-particle and open a path to physics beyond the Standard Model Of Particle Physics.

Looking to the future, Hagen eyes “superheavy” elements—lead-208 and beyond. Superheavies have never been simulated from first principles.

“Lead-208 pushes everything to the limits—computing power and methods,” he said. “With this next generation computer, I think simulating it will be possible.”

DOE’s Office of Science supports Hagen’s research. He is also a recipient of an American Physical Society fellowship.

UT-Battelle manages ORNL for DOE’s Office of Science. The single largest supporter of basic research in the physical sciences in the United States, the Office of Science is working to address some of the most pressing challenges of our time. For more information, visit https://energy.gov/science. —by Dawn Levy