Getting Metal Under Graphite’s Skin 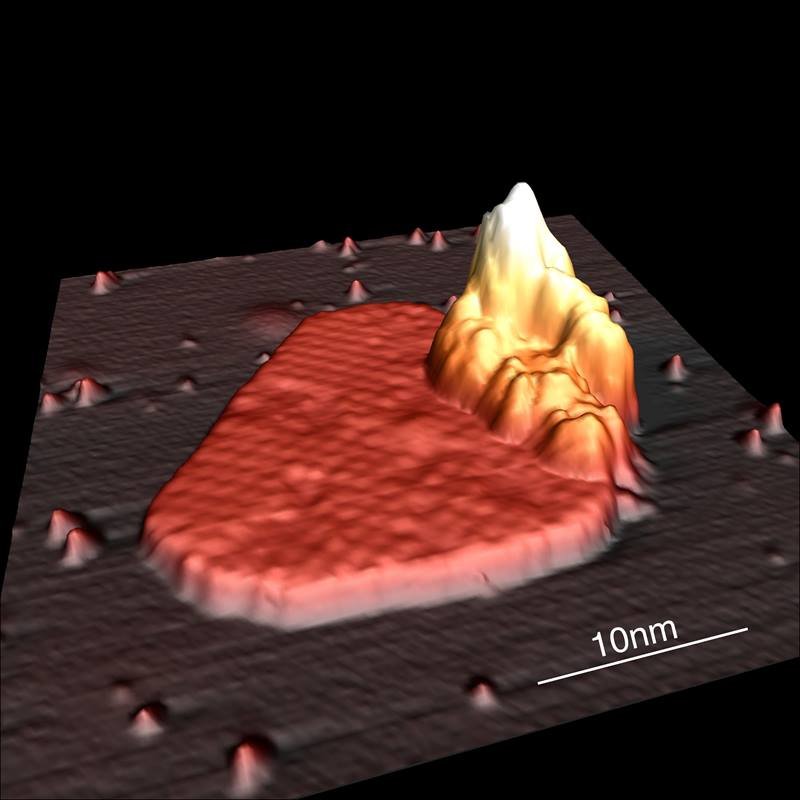 A faceted metal island of the rare-earth element dysprosium formed under a layer of graphite. The team deposited the metal at 577 degrees Celsius after they bombarded graphite with argon ions.

Your car’s paint protects the metal underneath. Encapsulating metals—far more expensive and rare than the steel in your car—protects surfaces from degradation. This protection is a possible way to tailor rare metals to have valuable transport, catalysis, magnetism, or friction properties. However, this possibility has received very little attention from the scientific community. Now, scientists have found a new way to protect metals. For the first time, they formed metal islands just under a graphite surface by first adding defects and then depositing metal at elevated temperatures.

Some metals need to be protected from the atmosphere. Exposure leads to damage that ruins their unique properties. Controllably forming metal islands just under the surface of graphite protects the metals. This allows these metals to take on new roles in ultrafast quantum computers. It also means new roles in magnetic, catalytic, or plasmonic materials.

Graphene is a carbon material that allows electrons to move rapidly along its surface, making it a very attractive material for electronic or magnetic applications. One way to protect metals from the atmosphere and have them interact with graphene is to encapsulate them in graphite. The graphite protects the metals from the atmosphere and lets the materials interact electronically with the graphene surface layer of the graphite. However, scientists need new formation methods to overcome challenges encountered by trying to insert the metals into the bulk materials. Scientists at Ames Laboratory have overcome this challenge by developing a new process for directly forming metal islands under the graphene layer. This process entails using high-speed ions to create holes in the surface, effectively creating entry portals for the metals. High-temperature deposition of the metals through these portals allowed the deposited atoms to move below the surface forming crystalline islands. As an unexpected benefit, the graphene layers entirely covered the islands, even along their sides, as they grew in height. Because these islands are fully protected, they can be made from reactive magnetic metals like dysprosium and can be used in air. Researchers prepared copper and ruthenium islands using this process at deposition temperatures of 527 and 927 degrees Celsius (980 and 1700 degrees Fahrenheit), respectively. Scanning tunneling microscopy confirmed the nature of the encapsulated structures, and computations confirmed their stability. These complex structures have the potential to form 2-D quantum materials with novel electronic and magnetic properties.

This work was primarily supported by the Department of Energy (DOE), Office of Science, Basic Energy Sciences, Materials Sciences and Engineering Division and made use of the National Energy Research Scientific Computing Center, a DOE Office of Science user facility. A visiting scientist was supported through the China Scholarship Council.