Growing Graphene Ribbons in One Direction 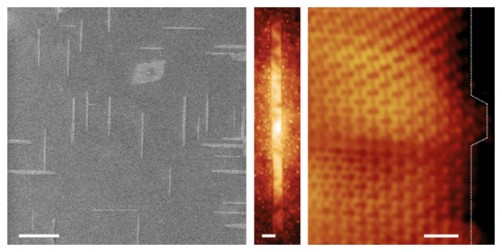 Tiny ribbons of a material called graphene could move electricity and dissipate heat more efficiently than silicon in electronic circuits; however, creating the ribbons on traditional supports wasn’t possible. Now, scientists have discovered how to synthesize narrow, long, semiconducting graphene nanoribbons directly on a semiconductor wafer. In this novel synthesis approach, extraordinarily slow growth of the two-dimensional graphene results in unidirectional growth of narrow graphene ribbons with well-defined edges -- resulting in the desired transformation of the graphene from a semimetal to a semiconductor.

Graphene nanoribbons are predicted to transport electricity and dissipate heat more efficiently than traditional electronic materials such as silicon. However, the precise fabrication of these semiconducting nanoribbons on conventional wafers has not been possible. Researchers at the University of Wisconsin-Madison have made a scientific breakthrough in understanding how to grow semiconducting nanoribbons directly on conventional germanium wafers. Oriented nanoribbons were grown using a technique called chemical vapor deposition. Under very slow growth conditions, the nanoribbons naturally grew with smooth edges on the surface of a germanium wafer with strongly one-directional growth -- aspect ratios for the length compared to the width of the nanoribbon exceeded 70, with the ribbons self-aligning within 6 degrees of each other. The fabrication of aligned arrays of long, narrow graphene nanoribbons (with a tunable width of less than 10 nanometers) directly on conventional semiconductor wafers is compatible with the existing semiconductor-processing infrastructure. This advance may enable the integration of nanoribbons into everyday electronics such as transistors and future, hybrid integrated circuits.