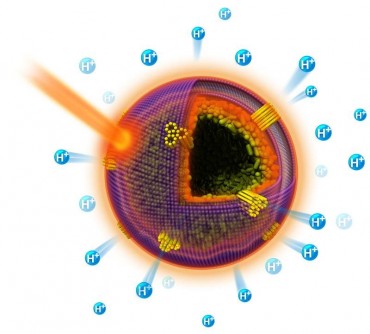 Plasmonic artificial cells are formed by self-assembly of Au–Ag nanorods into hollow compartments.

This artificial cell design uses tiny rods (nanorods) made of silver and gold to create a biological cell wall similar to those in nature. These rods are in contrast to the lipids (such as fats and fatty acids) that biological cells use to make cell walls. These nanorods respond to light in a way that speeds up how quickly certain proteins can produce protons.

Recent efforts to make artificial cells have membranes packed with nanoparticles and assembled into a colloidal capsule. The membrane substance itself offers advantages including tunable pores through which ions can pass. However, the membrane material also may influence inherent processes of interest within the artificial cells. This study was designed to develop an understanding of such effects. Researchers at the Center for Nanoscale Materials at Argonne National Laboratory, a Department of Energy Office of Science user facility, created light-responsive artificial cells using so-called plasmonic materials –nanosystems that can interact with light in unique ways – for the colloidal capsules. In addition, a light-gated protein is used to drive a photo-activated synthesis process. The artificial cells have a colloid packed with silver-gold (Au-Ag) nanorods which self-assemble into capsules. Furthermore, the Au-Ag nanorods attain a plasmon resonance under certain light conditions. The light-activated protein bacteriorhodopsin was then attached onto the surface of the capsule. Bacteriorhodopsin was chosen for its ability to transport protons across a membrane under illumination. The bacteriorhodopsin captures light energy, uses that energy to pump protons across the membrane, and converts the differences in proton concentrations into chemical energy. The cell-like potential of this design was further demonstrated by leveraging the protons as “chemical signals” for triggering ATP biosynthesis in a coexistent artificial cell population. In total, the artificial cells perform consistently with design objectives. The broad plasmon resonance of the Au-Ag colloidal capsules enhanced the probability of photoreaction by the light-activated protein, thus creating a new light-controllable synthetic “protocell.” The synthetic protocell model offers opportunities for developing alternative solar-to-chemical energy conversion systems.

This material, based upon work supported by Argonne National Laboratory Directed Research and Development (LDRD) funds, and use of the Center for Nanoscale Materials, an Office of Science user facility, was supported by the U.S. Department of Energy, Office of Science, Office of Basic Energy Sciences, under contract no. DE-AC02-06CH11357.