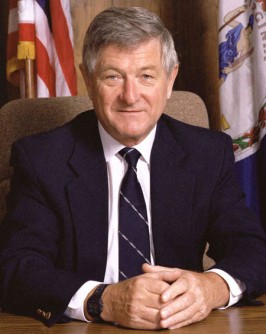 Grunder’s contributions to accelerator science and technology span decades and multiple accelerator facilities as he moved from the Department of Energy’s Lawrence Berkeley National Lab, to Jefferson Lab to Argonne National Lab. His impacts have been felt nationally as well as internationally.

“…CEBAF was also the stage on which Hermann Grunder changed the course of accelerator science and nuclear physics in the world. The approved accelerator design involved a conventional approach with normal conducting radio-frequency cavities and a stretcher ring. Under Hermann Grunder’s leadership, the nascent laboratory seriously examined a new and emerging technology, that of superconducting radio-frequency acceleration which had, to that point, been successfully demonstrated only on modest scales… In retrospect, that decision was perhaps the most insightful and influential accelerator decision of the last twenty years of the prior century.”

The citation for the PAST Award recognizes the impact of his work, reading “For far reaching contributions to accelerator science and technology.”
Grunder is both delighted and humbled by the honor. “Everything I have accomplished in the accelerator community has been a team effort,” he responded, when notified of the award. “While I get credit for making this technological leap, there were teams of talented and dedicated people to help deliver on the promise of this new technology, particularly the superconducting cavity group at Cornell.”

Two awards are granted at each of the Particle Accelerator Conferences held in North America (PAC or IPAC) with at least one award given to an individual early in his/her career. Grunder’s co-recipient for the 2018 PAST Award is Dr. Sandra Biedron, from the University of New Mexico, who has collaborated closely with Jefferson Lab colleagues to understand the intricacies of the effects of coherent synchrotron radiation in energy recovery linear accelerators.

###
The Thomas Jefferson National Accelerator Facility (Jefferson Lab) is a world-leading nuclear physics research facility devoted to the study of quarks and gluons – the building blocks of matter inside the atom's nucleus that make up 99 percent of the mass of our visible universe. Jefferson Science Associates, LLC, a joint venture of the Southeastern Universities Research Association, Inc. and PAE Applied Technologies, manages and operates Jefferson Lab, for the U.S. Department of Energy's Office of Science.
DOE’s Office of Science is the single largest supporter of basic research in the physical sciences in the United States, and is working to address some of the most pressing challenges of our time. For more information, visit science.energy.gov.