A new technique synchronized high-energy electrons with an ultrafast laser pulse to probe how vibrational states of atoms change in time. 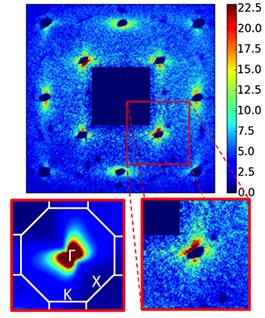 High-energy electrons coupled to a laser were used to probe the atomic motion induced in a thin film of gold. A 2-dimensional detector measured the intensity and direction of the electrons scattered from the gold atoms. The measured change in the electron scattering with and without exposure to the laser beam (the laser excites the atoms, increasing their vibrations) is shown in the top image. The scattering is strongest in the regular array of dark blue spots in the image associated with the average position of the atoms in their crystalline array. The hazy region, or speckle, around a strong saturated peak (bottom right) is compared to a calculation (bottom left) of the directionally dependent diffuse scattering related to collective thermal motion of atoms. Such measurements are important for understanding energetic states and thermal transport in materials – foundational for many technologies, such as thermoelectric devices

Newswise — A new ultrafast technique, using high-energy electrons coupled to a laser pump, revealed insights into atomic vibrational dynamics in a laser-heated gold thin film. This technique directly measured the phonon spectrum (quantized packets of energy related to atomic lattice vibrations) and explored the energy transfer from the laser excited electrons to atomic vibrations of the atomic lattice. This work demonstrates that specialized ultra-fast electron diffraction instruments can add to the suite of time-resolved laser pump/probe techniques capable of exploring excitations in materials.

Ultrafast excitation and energy transfer at the atomic scale is important in phase transitions, chemical reactions, and macroscopic energy flow. Relevant vibrational time frames occur in femtoseconds (move the decimal point for 1.0 second 15 times to the left). This research established the usefulness of this technique to resolve changing vibrational states, the understanding of which could advance a range of applications from superconductivity to laser-induced phase transitions.

The interactions of electrons and the atoms they reside in are important for a range of phenomena, from fundamental electron and spin transport, to laser-induced phase transitions. Most experimental techniques are limited in their ability to investigate atomic vibrations (phonons) because, like a thermometer, they average over all of the vibrational states in the material. Now research led by the SLAC National Accelerator Laboratory has directly measured the full frequency range and time dependent behavior of phonons in a laser-heated gold thin film. In the experimental setup, high-energy electrons were emitted from an electrode by an ultrafast laser pulse. Both pulses, electrons and light, continued to the sample. The laser pulse arrived first and excited the resident electrons in the gold material, which was then probed by scattering the subsequent electron pulse into a detector. The pump/probe technique, involving the newly developed ultrafast electron diffraction source, measured the positions of the atoms as a function of the controlled and variable time between pump and probe.

Analysis of the atomic vibrations helps determine how light energy, first absorbed by the electrons around atoms, eventually is transferred to the motion of the atoms themselves. The analysis showed varying coupling times between the electron and phonon excitations. The results confirmed that energy transfers faster to higher frequency vibrations than to phonons at lower frequencies. This new tool can be used to understand energy transport at its shortest length and time scales and thus advance the understanding of materials phenomena where thermal energy is critically important, such as in superconducting and thermoelectric devices.