Hotter All the Way: Lithium Wall Contains Plasma Without Cooling It

Lithium walls open up access to new regimes for the fusion reactor. 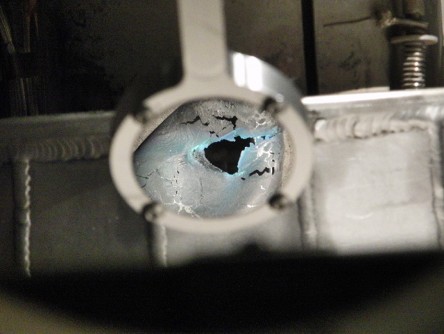 View of the surface of a lithium pool in Lithium Tokamak Experiment, as it is heated and cleaned of oxides by a beam of high energy electrons. Electron impact causes the oxide layer to fluoresce a pale blue glow. Lithium is evaporated from two pools such as this, to coat the entire inner surface of the tokamak.

Newswise — Nearly everybody knows about lithium -- a light, silvery metal -- used in rechargeable batteries. But did you know it may be a vital part of fusion reactors, which harness the same reaction that fuels our sun? Fusion reactors require walls that don’t sputter out metals or overly cool the plasma at the heart of the reaction. Researchers demonstrated that lithium-coated walls can handle temperatures exceeding 200 eV. The influx of lithium to the reactor’s core is expected to decrease as the plasma edges heat up to fusion-relevant temperatures. Also, because lithium is the lightest of all solid metals, if modest amounts of lithium are sputtered, it does not impact performance.

Cooling the edge plasma in a donut-shaped reactor called tokamak to low temperatures cools the core as well, and the reactor’s performance is reduced. If a hot plasma edge can be tolerated by the wall, fusion performance will increase. Very flat temperature profiles with a hot plasma edge have now been achieved in the Lithium Tokamak Experiment, located at DOE’s Princeton Plasma Physics Laboratory, by adding a lithium wall. Such uniformity in the radial temperature profile may also significantly reduce the means by which plasma instabilities are driven, and hence decrease energy and particle losses.

In large tokamaks with tungsten walls, the edge plasma must be cooled to low temperatures before it contacts the wall. This reduces sputtering of the wall by the plasma, which can lead to the introduction and accumulation of heavy impurities in the plasma. Sputtering of a heavy wall material, such as tungsten, increases continuously with the plasma energy, until very high energies are reached. The mass difference between the hydrogen plasma ions and the wall atoms is much smaller for lithium than tungsten, and sputtering of lithium peaks at relatively low energies (around 200 eV). The lithium sputtering decreases continuously at higher energies, up to temperatures of 10 keV or more. This is because higher energy ions “bury” themselves in the light wall material, and transfer little energy to the surface atoms. Aside from the potential performance improvements for tokamaks, the Lithium Tokamak Experiment (LTX) provides an opportunity to investigate the behavior of plasmas with flat temperature profiles. Plasmas with uniform temperature throughout, i.e., without a temperature gradient, are in a regime that has never been previously achieved for any magnetically confined plasma. This work was performed as a collaboration between the Princeton Plasma Physics Lab and Oak Ridge National Laboratory, with participation by the University of Washington Plasma Science and Innovation Center, and the University of California, Los Angeles.