How to Achieve Unconventional Superconductivity in a Heavy-Electron Metal 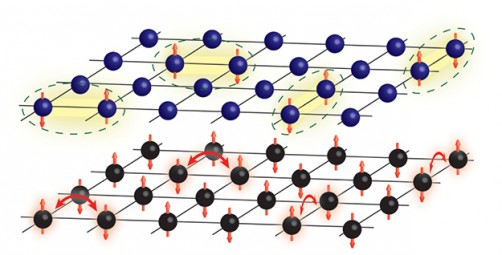 The formation of Cooper pairs, bound electron pairs (yellow shaded blue spheres with arrows to indicate spin direction), in some superconductors is generated by magnetic interactions of loosely bound electrons with electrons that are much more strongly bound to their parent atom (black spheres in the atomic plane with spins of neighboring electrons pointing in the opposite direction). Scientists demonstrated that a certain superconductor is the poster child for this long sought pairing mechanism of unconventional superconductivity, where a material can conduct electricity with no resistance to increase efficiency.

Energy is usually lost in transmission. Superconductors can transmit electricity without loss but require extreme cold. To build robust superconductors, scientists focus on magnetism, which persists at room temperature. Scientists built a theoretical framework that explains the electronic state in a superconductor. The data shows strong evidence for the role of magnetic interactions in the emergence of unconventional superconductivity in cerium-cobalt-indium-five (CeCoIn5). The material belongs to a family containing heavy fermions. In heavy fermions, the heavy electron mass is due to strong electron-electron interactions. Revealing the magnetically mediated electron behavior elucidates many of the puzzling superconducting properties exhibited by this material family.

One of the biggest challenges in solving the world’s energy problems lies in efficiently transferring electricity from the place where it is generated to the place where it is needed. Superconducting materials, discovered more than 100 years ago, can conduct electricity without any losses at low temperatures. However, even the most advanced of these materials still need to be cooled down to the boiling point of liquid-nitrogen temperatures (-320 degrees Fahrenheit or 77 Kelvin) before they become superconducting, making it difficult to use them on a large scale such as the electric grid. Thus, developing a material that is superconducting at or near room temperature represents an important challenge in physics. The only quantum phenomenon that survives robustly at room temperature is magnetism and therefore magnetically mediated pairing represents our best opportunity to achieve room temperature superconductivity. By developing a novel theoretical formalism, scientists have succeeded in extracting two crucial, missing components of our understanding of the superconducting mechanism in CeCoIn5. First, using a scanning tunneling microscope, the quantum mechanical interference of electron-matter waves induced by impurity atoms can be visualized in this superconducting quantum material. Using theory, scientists extracted the complex electronic band structure of the heavy fermion material from the experimental data. Second, scientists showed theoretically that the spatial form of the antiferromagnetic interaction between localized magnetic moments, or spin fluctuations, is encoded in this electronic band structure, and can thus be extracted from it. As this interaction is conjectured to give rise to the emergence of superconductivity, it was possible for the first time to compute the complex, multi-band momentum structure as the material becomes superconducting, and to quantitatively predict a series of key properties of the superconducting state of CeCoIn5. The quantitative agreement between these theoretical results and the experimental findings provides strong evidence that the pairing of electrons in this unconventional superconductor is mediated by strong magnetic interactions, confirming a more than 30-year-old hypothesis. The development of a quantitative microscopic mechanism makes it possible to explore quantitatively how the electronic structure and magnetic interaction affect the critical superconducting transition temperature and will help in the pursuit of higher temperature superconducting material.