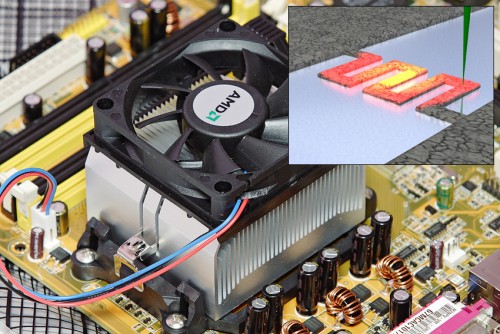 Image courtesy of The Molecular Foundry

Fan-cooled heat sink on a microprocessor. Plasmon energy expansion thermometry, inset, uses a beam of electrons to track where heat is produced and how it dissipates with nanometer accuracy.

A team of users and staff working at the Molecular Foundry have created a thermal imaging technique that can “see” how temperature changes from point to point inside the smallest electronic circuits.

Used in everything from cell phones to supercomputers, modern microelectronic circuits contain billions of nanometer-scale transistors, each generating tiny amounts of heat that collectively can compromise the performance of the device. Seeing where the heat is generated provides valuable information for circuit designers to probe where failures are occurring and to realize the next generation microprocessors.

Electrons passing through a sample excite collective charge oscillations called plasmons. Monitoring the energy required to excite the plasmons enables measuring local variations in a sample’s density, which are directly related to the local temperature within an integrated circuit or transistor. Based on these principles, the researchers developed a new technique called plasmon energy expansion thermometry, or PEET. It enables measuring local temperature with 3-5 K precision and 5 nm spatial resolution. The new technique provides 100-fold better resolution than optical pyrometry. The new technique is the only technique that allows correlation of atomically resolved structure to a device’s thermal characteristics.

This work has been supported by National Science Foundation award DMR-1206849 and in part by Function Accelerated nanoMaterial Engineering (FAME), one of six centers of Semiconductor Technology Advanced Research network (STARnet), a Semiconductor Research Corporation program sponsored by the Microelectronics Advanced Research Corporation and Defense Advanced Research Projects Agency. Data presented in this article were acquired at the Center for Electron Microscopy and Microanalysis at the University of Southern California. Work at the Molecular Foundry was supported by the Office of Science, Office of Basic Energy Sciences, of the U.S. Department of Energy under contract DE-AC02-05CH11231.