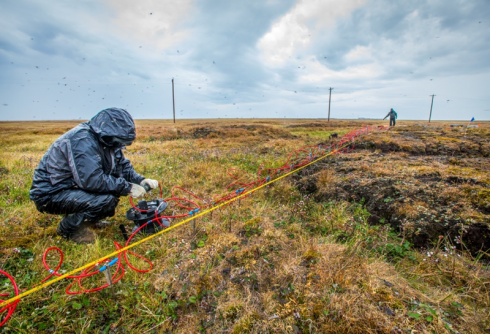 When permafrost thaws, water can flow more quickly through the ground, creating a complex subsurface flow system. Researchers at the Barrow Environmental Observatory in Alaska gained insight into this process by taking daily measurements of the electrical resistivity of the ground. The results show that vegetation and the snowpack that accumulates on the vegetation in winter control the temperatures of the ground and the flow of water in the ground. Where snow accumulates, ground temperatures stay warmer and water and energy from snowmelt and rain can flow through the ground quickly. Where the snowpack is thin, ground temperatures are colder, preventing the flow of water.

Highlighting the link between above- and belowground properties and processes in the Arctic will help improve scientists’ predictions of how the Arctic relates to broader climate change. The results also show that Arctic systems are changing rapidly, and that permafrost at the research team’s study site could disappear within the next decade. Changes in snowpack distribution and rainfall patterns could accelerate this process.

Climate change is causing rapid changes in Arctic ecosystems, but scientists have not collected enough data needed to unravel complex subsurface processes associated with these changes. Using geophysical and in situ sensing, researchers closed an observational gap associated with thermohydrological dynamics in discontinuous permafrost systems. Researchers collected data over more than two years of monitoring and were able to uncover the effects of vegetation, topography, and snow thickness distribution on subsurface thermohydrological properties and processes. Large snow accumulation near tall shrubs insulates the ground and allows for rapid and downward heat flow, whereas thinner snowpack above low graminoid grasses and sedges results in surficial freezing and prevents water from infiltrating the subsurface. Analyzing short-term disturbances such as snowmelt or heavy rainfall, the research team found that lateral flow could be a driving factor in the formation of a talik, a subsurface layer in permafrost that remains unfrozen year-round. Interannual measurements indicate that deep permafrost temperatures increased by about 0.2 degrees centigrade over two years. The results of this study, which suggest that snow-vegetation-subsurface processes are tightly coupled, will improve predictions of Arctic feedback to climate change, including how subsurface thermohydrology influences carbon dioxide and methane fluxes.

This research was supported by the Department of Energy Office of Science, Office of Biological and Environmental Research.