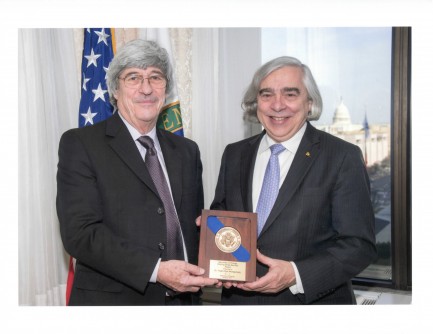 This honor highlights Montgomery’s contributions to the research programs at the DOE national labs, both as a world-leading researcher and as a more than 30-year DOE national laboratory employee.

The award was given to Montgomery by outgoing Energy Secretary Ernest Moniz in a ceremony in mid-January 2017. The citation reads, “In recognition of more than three decades of leadership, distinguished service, and exceptional contributions to research at the high energy frontier of particle physics at Fermi National Acceleratory Laboratory, and to enabling world leading capability and unprecedented research opportunities for the nuclear science community for decades to come at Thomas Jefferson National Accelerator Facility.”

“Of course, I am honored to be presented The Secretary’s Distinguished Service Award. This is made as a personal award, but in our field, nothing is achieved without the help and support of colleagues. In particular, the work at Jefferson Lab has relied on the superb efforts of all the staff at the lab over the past eight years,” said Montgomery.

“One of Hugh Montgomery’s singular achievements has been to dramatically increase the visibility, scope and impact of Jefferson Lab’s role as a world leading research institution,” said Timothy J. Hallman, associate director of the Office of Science for Nuclear Physics. “Knowing Mont’s tireless, unrelenting pursuit of knowledge and advanced technology at the frontiers of nuclear and particle physics, one would expect nothing less. It has been a remarkable progression to witness, nonetheless.”

Joe Arango, manager of the DOE’s Thomas Jefferson Site Office, agreed, “Mont has done a wonderful job leading the laboratory through a period of accelerator upgrade, as well as other facility and infrastructure improvements that have transformed the campus and positioned Jefferson Lab for continued scientific research accomplishments in the years ahead.”

Montgomery became the third director of Jefferson Lab on Sept. 2, 2008, and also serves as the President of Jefferson Science Associates, LLC. He will step down from those roles upon the arrival of his recently announced successor, Stuart Henderson, in April.

An internationally recognized physicist, Montgomery came to Jefferson Lab after 25 years at Fermilab National Accelerator Laboratory in Batavia, IL, where he’d most recently held the position of associate director for research. Montgomery began his career in 1972 as a research associate at the Daresbury Laboratory in Great Britain. In 1978, he became a staff member at CERN in Geneva, Switzerland. He joined the staff at Fermi in 1983, where his work included involvement in the discovery of the top quark in 1995. Montgomery held a number of positions within the laboratory management before being named associate director for research in 2002. He has served as director of Jefferson Lab and president of Jefferson Science Associates, LLC, since 2008.