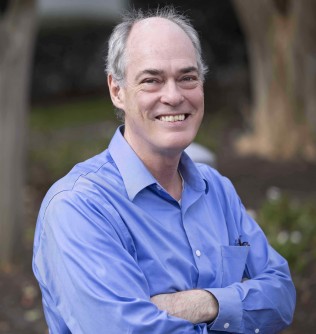 Newswise — NEWPORT NEWS, VA – After an extensive international search, the U.S. Department of Energy’s Thomas Jefferson National Accelerator Facility has appointed Mark Jones as the new group leader of the lab’s Experimental Halls A and C. He began his tenure Nov. 1.

Jones already has deep experience with nuclear physics, equipment and analysis. He began working at Jefferson Lab in 1992 as a postdoctoral researcher at William & Mary. He was hired at the lab as a staff scientist in 2001 and was recently promoted to the level of senior staff scientist. For most of the past year, he has also served as acting hall leader.

“I’m grateful and honored to be chosen,” Jones said. “There has been outstanding leadership in the past, so I just hope I can keep up the good work. We have a world-renowned staff of physicists, engineers, designers and technicians, so it’s great to have this wonderful team. It makes it easier.”

Around 1,600 users from around the world conduct cutting-edge nuclear physics research at Jefferson Lab, using its powerful Continuous Electron Beam Accelerator Facility, or CEBAF, to probe the smallest subatomic particles that are the building blocks of the universe. CEBAF is a DOE Office of Science user facility pursuing nuclear physics research.

For each experiment, a particle beam is shot around a nearly mile-long oval underground accelerator at nearly the speed of light, gaining energy with each lap. When the right energy is reached, the beam is directed into one of four experimental halls — A, B, C or D — where it collides with a chosen target. Highly sensitive detector systems observe and register the subatomic particles that cascade downstream of the collision. The results augment — or sometimes challenge — current understanding of the workings of the universe.

As hall leader, Jones is responsible for managing the physicists, administrators, engineers and technicians who support, develop, maintain and engage in experiments as well as the vast number of precision instruments required to conduct them in Halls A and C.

Halls A and C have had joint leadership in the last decade or so, largely because there’s some overlap between the halls and the types of experiments they’re able to support. Jones worked on the first Hall A experiments at the lab while still a postdoc, when he supervised the construction, installation and operation of the front chambers of the focal plane polarimeter in one of Hall A’s High Resolution Spectrometers.

Jones said his goal is to continue the productive leadership of his predecessors, advancing experiments that have been vetted and approved by its Program Advisory Committee sometimes years in advance.

“I’m just hoping to successfully run the experiments that have been proposed and approved by the PAC and then support new ideas that come forward,” he said. “We’re in early planning for a potential energy upgrade for the CEBAF, so I’ll try to generate new ideas for experiments that can take advantage of that upgrade and improve our understanding of the fundamental forces between quarks and gluons, so that we can push these limits and improve our understanding.”

Jones was a staff scientist in Hall C during the last CEBAF upgrade, when its energy was doubled to 12 GeV, or 12 billion electron-volts, to enable even more informative studies in nuclear physics. During that upgrade, he managed the update of the data analysis software from the aging Fortran to a C++ code based on the framework of the Hall A analyzer. He also served as a co-spokesperson for several of the upgraded CEBAF’s first-run, high-profile experiments.

The drive to expand our understanding of the universe is what initially drew him to physics.

“The sense of discovery is the main thing,” Jones said. “It crosses all science. Even with the best predictions, you’re never sure what you’re going to find in nature. There are always surprises.”

This is true for what he considers his most notable accomplishment in the late 1990s in an experiment to measure the electron form factor of the proton, which produced highly unexpected results that have now been verified multiple times by subsequent measurements. The form factor encodes information about the internal structure of a particle, which can be used to test theories of the strong force between quarks and gluons.

“People didn’t think that the measurement was going to be that exciting,” Jones said. “I do remember when we were getting the first online results, and they were totally different than what people were expecting.

“That’s what’s exciting about discovery. If you find the unexpected, it usually opens up new avenues for a theory to explain the data, and new possibilities.”

Those results are the most-cited Jefferson Lab publication and led to Jones’ becoming project manager for the successful construction of the Super BigBite Spectrometer equipment and comprehensive nucleon form factor program now running in Hall A.

For now, Hall A is in the midst of experiments to measure the electric and magnetic form factors of the proton and neutron using the Super BigBite Spectrometer and BigBite Spectrometer. After these wrap up, the Measurement of a Lepton-Lepton Electroweak Reaction (MOLLER) experiment will measure the weak charge of the electron. This measurement is sensitive to new physics beyond the Standard Model and is complementary to direct searches for new physics at high-energy colliders such as the Large Hadron Collider at CERN. MOLLER is a ~$60 million project supported Primarily by DOE with contributions to the detector and data collection systems from the National Science Foundation and the Canadian Foundation for Innovation.

Next spring, Jones will oversee installing the Neutral Particle Spectrometer (NPS) in Hall C. With the NPS, scientific users will measure deeply virtual Compton scattering on protons and neutrons, while simultaneous experiments will measure neutral pion production in semi-inclusive deep inelastic scattering. The results will guide theorists in developing models of the 3D map of the quark’s momentum and position inside the proton and neutron.

Jones, 61, is originally from Pennsylvania. He earned his bachelor’s degree in physics from Oberlin College and Conservatory and his Ph.D. from the University of Minnesota. In addition to William & Mary, he conducted postdoctoral work at Old Dominion University, the University of Maryland and Rutgers University before joining Jefferson Lab as a staff scientist in 2001.