Jetting Into the Moments After the Big Bang 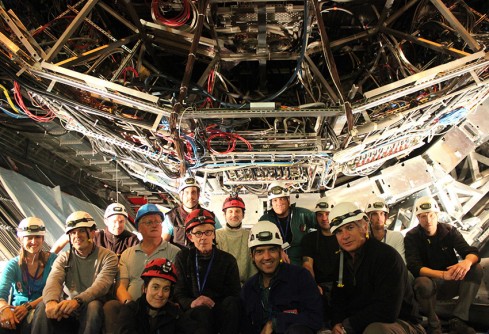 Members of the DCal installation team in the ALICE detector. The recently completed DCal is hanging above their heads.

Colliding lead ions at the Large Hadron Collider (LHC) creates tiny samples of matter at energy densities that have not occurred since microseconds after the Big Bang. At these densities, ordinary matter melts into its primordial constituents of quarks and gluons, shining brightly at temperatures more than 100,000 times hotter than the center of the Sun. To explore the properties of this plasma of quarks and gluons as it expands and cools, a new Di-Jet Calorimeter (DCal) was installed in the ALICE detector to provide unique insights into the nature of the universe.

The structure of the neutrons and protons (the particle constituents of an atom’s nuclei) that make up all matter, including coffee cups and constellations, are explained in terms of the underlying quarks and gluons along with a mechanism that keeps quarks tightly confined. The confinement mechanism is overcome during particle collisions at the LHC, and a short-lived plasma of quarks and gluons is formed. The installation of the DCal, opposite a previously installed similar calorimeter, will allow scientists to detect back-to-back jets of subatomic particles (Di-Jets). The relationship between the energy and angles of the two jets is modified by the plasma of quarks and gluons. The Di-Jets thus provide a tool to more precisely characterize the matter produced in ultra-high energy nuclear collisions and answer fundamental questions about the physics that holds all matter together.

With the LHC, scientists can study strongly interacting matter at extreme energy densities using, among other instruments, a heavy ion detector codenamed ALICE (A Large Ion Collider Experiment). The DCal upgrade significantly enhanced the acceptance angle – the measurement equivalent of field of view – of the ALICE experiment. The DCal construction was completed in September 2014, two weeks ahead of schedule. The installation of the calorimeter was recently completed. The DCal effort required redesign of the ALICE support structure, fabrication and assembly of the DCal components, and finally, integration and installation of the full detector in ALICE. This substantial engineering and construction effort was a collaborative effort among ALICE-USA and teams from Nantes and Grenoble, France; Wuhan, China; and Tsukuba, Japan. The ALICE experiment now offers substantial new capabilities for the study of di-jets when the LHC restarts.

Approximately 70% of the funding for DCal and the other calorimeter was provided by the U.S. Department of Energy. The balance was provided by France (IN2P3), Italy (INFN), Japan, and China.